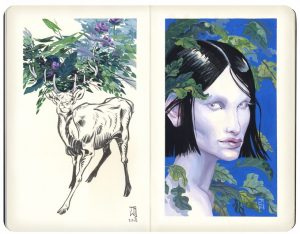 A chat with L.A. artist J.A.W. Cooper about her process and inspiration

A professional illustrator, fine artist, and adventurer, J.A.W. Cooper shares her drawings and sketches of animals, women, and mythologically inspired creatures with her hundreds of thousands of followers. She was among a group of artists and photographers who attended a #nicheXgetty meetup earlier this year. They spent the evening at the Getty Center getting to know each other and exploring “sight, sound, and smell through creative images” in the words of Instagrammer Pete Halvorsen.

“I was having so much fun just looking at the exhibits, I’ve ended up running out of time to actually draw” Cooper said, of both times she’s attended meetups at the Getty. But museum inspiration stays with her after she leaves, and finds a home in her work.

I asked her about her process and her unique style.

Allison Ramirez: How and when did you get started as an artist? Are you formally trained or self-taught?

Cooper: I’ve been drawing since I was very young. Originally I wanted to be a zoologist, but decided to pursue a career in art when I graduated from high school. I attended a four-year art college, worked my ass off, graduated, and have been working ever since. Though I attended and graduated from college, I continue to teach myself—naturally.

Tell me a little about yourself and your process as an artist.

I was born in England, grew up in Kenya, Sweden, Ireland, and Southern California, and ended up in Los Angeles for college. I stayed for the incredible job opportunities here.

My process for my personal work is heavily word-based in the initial concept stages and then progresses through sketches and eventually to paint in gouache, acrylic, or oils primarily. 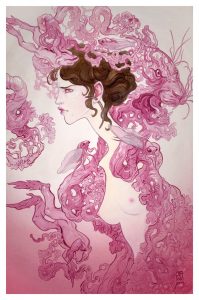 Viscera / Courtesy of and © J.A.W. Cooper 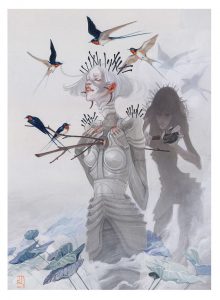 Sticks and Stones / Courtesy of and © J.A.W. Cooper 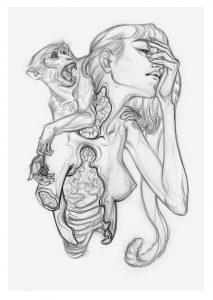 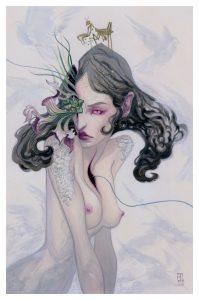 Cleave / Courtesy of and © J.A.W. Cooper 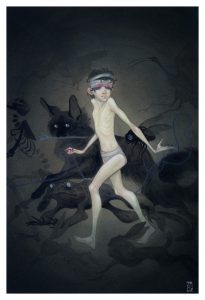 Give Me Darkness / Courtesy of and © J.A.W. Cooper 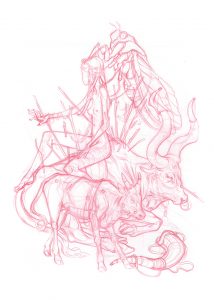 Your animal sketches are very cool—any particular reason you have a fascination with “creatures”? I also see that you draw naked women and some mythological-looking women. What’s the story behind this?

My parents are both freshwater ecologists (hence all the traveling in childhood) and my mother also does scientific illustration, so I was doomed to be interested in both creatures and art from an early age. My work is ultimately autobiographical, though certainly abstractly; thus I am interested in representing strong, powerful (sometimes mythical) women. They tend to be nude because I want them to feel more animal-like and connected to nature, and also not bound to a particular time or place. 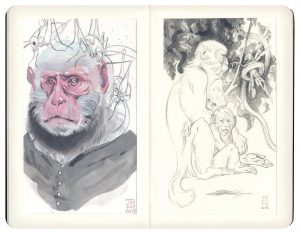 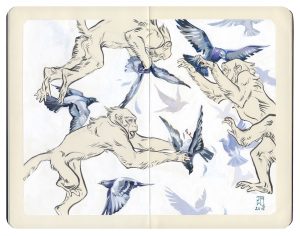 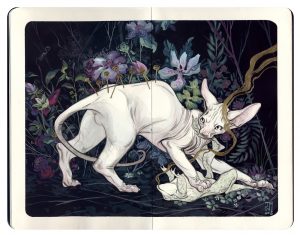 Tell me about the #nicheXgetty meetup you attended at the Getty Center.

I was invited by Tayen Kim, who I respect highly both for her illustration chops and her natural ability to bring people together. As expected from any event Tayen is involved in, I made a whole bunch of connections and quite a few new friends! In addition, I had a blast walking around the Getty and swooning over the decorative arts exhibits.

What is it about museums, and the Getty specifically, that inspires you?

The architecture and gardens are unbelievably gorgeous, and of the exhibits I am always particularly fond of the decorative arts and portrait galleries.

Give us some beginner tips for looking at and drawing dynamic animal and human forms.

Know the anatomy inside and out so that you can break and stretch “the rules” in a believable way.