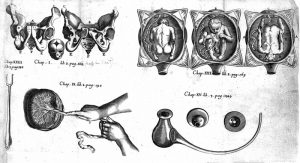 EPB/35960/A: François Mauriceau, The accomplisht midwife, treating of the diseases of women with child, and in child-bed (London: J. Darby for B. Billingsley, 1673), first folding plate. Wellcome Images L0014457.

Looking through copies of ‘The diseases of women with child and in child-bed’, the English translation of the seminal work on midwifery by François Mauriceau (1637–1709) first published in French in 1668, I noticed something distinctive. While in some editions the illustrations were all gathered onto large folded plates bound at the back of the book, in others each small illustration had been meticulously cut out and pasted or bound in at the relevant page.

Illustrations can be amazing historical records. On the one hand, they often record ways of thinking and knowing that texts do not. On the other, illustrations within books engage closely with texts, and help us to think about books as material objects.

In the case of Mauriceau, I wondered whether the manner in which these images moved could tell me something about how early modern people were reading and using their books. 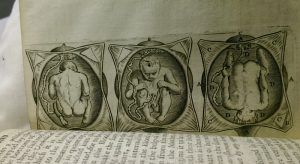 EPB/35961/A: François Mauriceau, The diseases of women with child, and in child-bed: as also the best means of helping them in natural and unnatural labors (London: Printed by John Darby, 1683), p. 168. Image credit: Rebecca Whiteley.

I first discovered that in the original French edition of the work (1668), the illustrations, which include anatomical images, depictions of medical instruments, and ‘birth figures’ which show foetal presentation, were engraved onto 28 small copper plates and printed interspersed within the text. This would have been a very expensive way to produce illustrations, requiring many separate plates to be printed, and for each to be carefully aligned with the text. 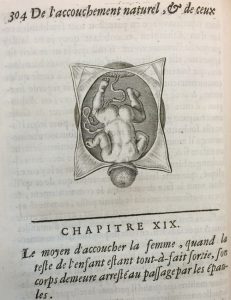 But when English publishers decided to produce an English translation of Mauriceau’s book in 1672, they gathered most of these illustrations and re-engraved them onto four large plates. In some copies, these plates are bound in whole, while in others they have been cut up and the separate illustrations have been bound or pasted in. I discovered that these differences are not just between editions, but between copies of the same edition. So what did the publishers intend for the illustrations, and who was actually deciding how they should be arranged?

Looking at the whole plates, we can see that some illustrations are oriented one way and some another, in order to fit as many as possible onto the plate. This is made especially clear by the varied orientation of the labels accompanying the images. This probably indicates that the publishers did intend for the plates to be cut up and distributed through the text block. 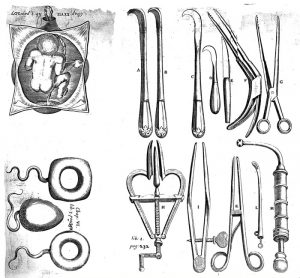 EPB/35962/A: François Mauriceau, The diseases of women with child, and in child-bed: as also the best means of helping them in natural and unnatural labours (London: Andrew Bell, 1697), plate facing p. 128. Wellcome Images L0014388.

But, during this period, books were often sold by publishers unbound and without covers. The owner would then take the book to a binder and get it bound to his or her specifications. This means that it was often the binder who arranged the illustrations within a text. Sometimes publishers even printed instructions to binders, so that they would know where to put the illustrations. In the English editions of Mauriceau’s book, each image does come with a page and chapter number. This could be interpreted as instructions to binders, or simply as references for readers flipping between text and image.

It is most likely that some owners gave their binders specific instructions on how to position the illustrations, and others did not. Moreover, some copies have the images pasted in as folding flaps attached to the page, rather than actually being bound in with the text block, and this could even have been done by an owner subsequent to the binding of a book. 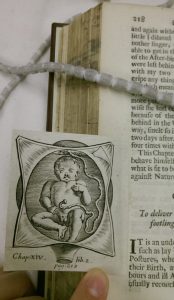 EPB/35961/A: François Mauriceau, The diseases of women with child, and in child-bed: as also the best means of helping them in natural and unnatural labors (London: Printed by John Darby, 1683), p. 218. Image credit: Rebecca Whiteley.

But what can this variation between copies tell us about reading practices?

I think that these different ways of interspersing the illustrations correspond to different reading practices.

For those who read the book studiously and cover-to-cover, having the illustrations separated out with each one positioned close to the relevant text would have been convenient and would have relieved the reader from having to flip from text to image. On the other hand, keeping the large plates intact could indicate use of the book as a reference work. A midwife, for example, might use the sequence of ‘birth figures’ to establish a particular foetal presentation, and then flip to the relevant page in the text. Whole, the plates could also be more easily displayed or even removed and used separately.

Ultimately, we can only guess how early modern readers used their books: they have left us very few traces. But one trace they have left is the careful cutting, arranging, binding and pasting of illustrations in books like Mauriceau’s. Representing the ‘cutting edge’ in midwifery knowledge in the late 17th century, the illustrations in Mauriceau’s book were clearly valued and referred to by readers as an intrinsic part of the volume, and of the reading experience. The way they were arranged, therefore, was as various as the ways people read and used their books in this period.