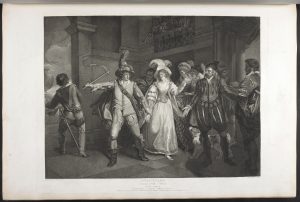 Did Shakespeare’s contemporaries believe in witches? Looking at witchcraft trials in the 16th century and considering their relation to the ‘weird sisters’ of Macbeth. 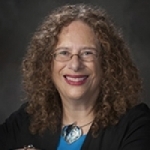 While king of Scotland, James VI became utterly convinced about the reality of witchcraft and its great danger to him, leading to trials that began in 1591. James was convinced that a coven of powerful witches was conspiring to murder him through magic, and that they were in league with the Devil. In 1597, with the end of the trials, James published his study of witchcraft, Demonology. When James became king of England in 1603, the book was published in London as well. James I’s fascination with witches was well known, and no doubt Shakespeare composed Macbeth in 1605 or 1606, using Holinshed’s Chronicles as his source, to please his new king. 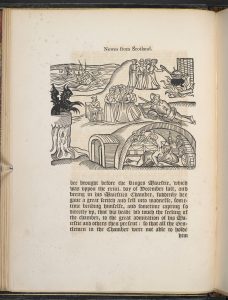 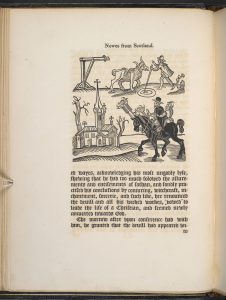 Witchcraft pamphlet: News from Scotland, 1591: A case of witchcraft involving a plot against the King himself / British Library, Public Domain

When Jacobean audiences watched Macbeth and heard the three witches talking, they would have witnessed Shakespeare’s own conjuring of the strange and supernatural. At the same time, some of the conversation of the ‘weird sisters’ would have seemed ordinary and familiar. In Act 1, Scene 3, the first witch tells her sisters that once when she saw a woman eating chestnuts she demanded some: ‘Give me!’ (1.3.4), but the woman called her ‘witch’ and ordered her away. The first witch then plans the harm she will cause the woman’s husband, a sailor on a ship, and the three witches cast a spell or ‘charm’ in retaliation (1.3.37). In Shakespeare’s England, this alleged practice was known as ‘mischief following anger’, and it was one of the most common charges against suspected witches in cases brought to trial. Most often, it was old, poor, often widowed women who were accused of these acts of angry revenge: a woman would beg for food or drink and when she was turned away she might respond angrily; later, when something unfortunate – such as a bad harvest or an ordinary illness – happened to the person who had denied the woman charity, the old woman would be blamed for their problems. Shakespeare’s enactment on stage of the witches plotting mischief would have intensified familiar fears of the harm witches could perform in daily life.

In Shakespeare’s England, anxiety about witchcraft and belief in magic and the supernatural were not limited to the lower or uneducated classes. Macbeth is a powerful man of high estate, and though at times he questions the validity of the three witches and their prophecies, he ultimately accepts the potential of witchcraft and magic. One of Queen Elizabeth’s courtiers, Sir Walter Ralegh, described witches as women controlled by the Devil. But others, such as Reginald Scot, author of The Discoverie of Witchcraft, were far more sceptical; Scot argued against the existence of supernatural witchcraft and claimed that some accused witches were women with mental illness while others may have been con artists. Indeed, at the height of the witchcraft trials almost all of those accused were women, and many of them poor or economically vulnerable who, like the witches of Macbeth, might beg their neighbours for something to eat. But unlike the stage witches, who, in Act 4, Scene 1, truly can conjure powerful magic, while some of those accused were convinced they were able to do so, ability to perform such magic was only on stage. 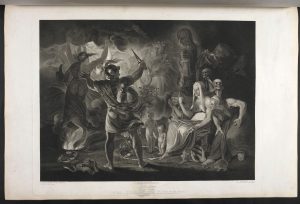 Since the Reformation, witchcraft in England had become a statutory crime. The first statute against it was passed in 1542, but this was repealed in 1547; a more severe one was passed in 1563, early in Elizabeth’s reign; and the harshest of all was passed in 1604, soon after James VI of Scotland became James I of England. Ironically, as James’s English reign progressed, the King grew more and more sceptical that there were actually witches.

As well as the charge of ‘mischief following anger’, there were other ways witches were identified at trial. One was the presence of ‘witch marks’, a mark supposed to have been put on a woman’s body by the Devil. Witches were also said to have ‘familiars’, demonic creatures which might appear to be cats, dogs, mice, rats or other small animals; these familiars would do the witches’ bidding. Another claim was ‘recovery after counter magic’: if someone was unwell and a spell helped them recover, this was seen as evidence that the original illness was caused by witchcraft. Water was another commonly used means of determining whether women were witches: water was seen as inherently pure, so a suspected witch would be tied up and flung in a pond or lake; if the suspect sank, the water ‘accepted’ her and therefore she was not a witch, but if she floated, the water ‘rejected’ her, and she was presumed a witch. Of course the suspects proven not to be witches might be drowning victims instead. Yet another way to prove someone was a witch was to extract confessions; in fear of their lives and sometimes under torture, there are cases of accused witches who delivered false confessions and also named others as witches.

In 1578 an especially notorious witchcraft case was that of Elizabeth Stile, a poor old widow from Windsor known for her harsh temper, and who, it was said, nourished her familiar (a rat) with her own blood and had a witch mark on her side. She often begged and was indeed irate when she was rebuffed. On one occasion, an innkeeper who had refused to give her food subsequently became ill and was convinced Stile had bewitched him. In a method long believed to cure a spell from a witch, he scratched Stile, and by drawing her blood, recovered. Stile associated with a crippled old woman known as Mother Margaret, and two other women Mother Dutten and Mother Devell, whom she claimed had got her involved in witchcraft. They were said to practise ‘image magic’, a process of harming someone by creating a picture or a wax doll (also known as a ‘poppet’), and then attacking the image or doll by stabbing it in the heart with bristles or sticks. 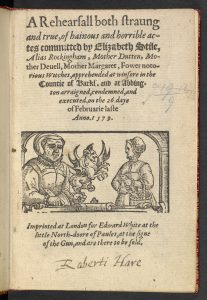 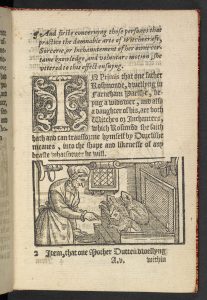 Witchcraft pamphlet: A Rehearsal both Strange and True, 1579: Illustration of a witch feeding her animal familiars in a pamphlet describing the case of Elizabeth Stile / British Library, Public Domain

At the same time as the Stile case, at the court of Elizabeth I there was fear that image magic was being used against the Queen. While Elizabeth was on progress in East Anglia, three wax images, each about 12 inches high, were found in a dung heap in Lincoln’s Inn Fields. One was clearly perceived to represent the Queen as it had the name Elizabeth on the forehead; the others apparently represented her close advisors. It was assumed that whoever made the images intended them to melt in the warmth of the dung heap, leading to great pain, distress and eventually the death of those the wax effigies, or ‘poppets’, represented. Elizabeth had not been feeling well, and many connected her illness to the wax images. Although it turned out that she was in fact suffering from severe dental problems, the magus and astrologer John Dee – in whom Elizabeth had such trust that she had asked him to choose the date for her coronation – went to Norwich to perform counter magic.

While the witches in Macbeth boasted about their magical practices, in actuality most of those accused did not practise any form of magic at all, and those who did were only ‘successful’ because their alleged victims were willing to blame them for their own misfortunes. In the case of Elizabeth Stile, one of her neighbours became sick and immediately blamed her witchcraft as the cause of his illness. In Windsor, Elizabeth Stile and the other women were tried for witchcraft and all found guilty. Elizabeth Stiles, Mother Dutten, Mother Devell and Mother Margaret were hanged on 26 February 1579.

While some women, like the witches of Macbeth, attempted to use practices such as image magic to harm, many others executed for witchcraft in Shakespeare’s England did not engage in any practices associated with witchcraft or magic at all. In 1593 in the town of Warboys, a poor woman Alice Samuels, her husband John and their daughter Agnes were all on trial, accused of bewitching the daughters of the wealthy Robert Throckmorton since 1589. The Throckmorton girls were young and their accusations were preposterous and naïve, but they were still seen as victims. After great pressure, Alice Samuels confessed, but her daughter Agnes convinced her to deny the confession, and the girls then claimed Agnes was a far worse witch than her mother. Agnes always proclaimed her innocence, but she, her mother and her father John were found guilty and executed.

The Windsor witches and the Samuels family were among the thousands who lost their lives because of entrenched beliefs in witches; in spite of sceptics like Reginald Scot, many believed that women could harm their neighbours through occult means. Unlike the witches of Macbeth, the women accused of witchcraft in Shakespeare’s England could not actually prophesy, disappear into thin air or summon spirits. Many of them, like Elizabeth Stile, the Samuels family and the other witches of Windsor were poor, old, vulnerable and powerless. Given cultural anxieties about the threat marginalised people posed to the community, and the willingness of the courts to accept such implausible evidence to prove witchcraft, it is tragic but not surprising that so many of the accused were found guilty.