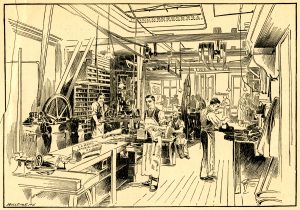 Illustration of a workroom where several men use machines and tools to craft prosthetics / National Library of Medicine, Public Domain

The transition from an agricultural to an industrial economy took more than a century in the United States, but that long development entered its first phase from the 1790s through the 1830s.

The Industrial Revolution had begun in Britain during the mid-18th century, but the American colonies lagged far behind the mother country in part because the abundance of land and scarcity of labor in the New World reduced interest in expensive investments in machine production. Nevertheless, with the shift from hand-made to machine-made products a new era of human experience began where increased productivity created a much higher standard of living than had ever been known in the pre-industrial world.

The start of the American Industrial Revolution is often attributed to Samuel Slater who opened the first industrial mill in the United States in 1790 with a design that borrowed heavily from a British model. Slater’s pirated technology greatly increased the speed with which cotton thread could be spun into yarn. While he introduced a vital new technology to the United States, the economic takeoff of the Industrial Revolution required several other elements before it would transform American life.

This drawing depicts men working the lock on a section of the Erie Canal. Find more lyrics like this “I’ve got a mule, her name is Sal, Fifteen years on the Erie Canal” on this New York State Canals website. / Creative Commons

Another key to the rapidly changing economy of the early Industrial Revolution were new organizational strategies to increase productivity. This had begun with the “outwork system” whereby small parts of a larger production process were carried out in numerous individual homes. This organizational reform was especially important for shoe and boot making. However, the chief organizational breakthrough of the Industrial Revolution was the “factory system” where work was performed on a large scale in a single centralized location. Among the early innovators of this approach were a group of businessmen known as the Boston Associates who recruited thousands of New England farm girls to operate the machines in their new factories.

The most famous of their tightly controlled mill towns was Lowell, Massachusetts, which opened in 1823. The use of female factory workers brought advantages to both employer and employee. The Boston Associates preferred female labor because they paid the young girls less than men. These female workers, often called “Lowell girls,” benefited by experiencing a new kind of independence outside the traditional male-dominated family farm.

The rise of wage labor at the heart of the Industrial Revolution also exploited working people in new ways. The first strike among textile workers protesting wage and factory conditions occurred in 1824 and even the model mills of Lowell faced large strikes in the 1830s.

Dramatically increased production, like that in the New England’s textile mills, were key parts of the Industrial Revolution, but required at least two more elements for widespread impact. First, an expanded system of credit was necessary to help entrepreneurs secure the capital needed for large-scale and risky new ventures. Second, an improved transportation system was crucial for raw materials to reach the factories and manufactured goods to reach consumers. State governments played a key role encouraging both new banking institutions and a vastly increased transportation network. This latter development is often termed the Market Revolution because of the central importance of creating more efficient ways to transport people, raw materials, and finished goods. 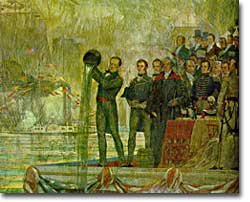 New York Governor DeWitt Clinton pours a bucketful of Lake Erie into the Atlantic Ocean to mark the opening of the Erie Canal in the autumn of 1825. / Creative Commons

Alexander Hamilton’s Bank of the United States received a special national charter from the U.S. Congress in 1791. It enjoyed great success, which led to the opening of branch offices in eight major cities by 1805. Although economically successful, a government-chartered national bank remained politically controversial. As a result, President Madison did not submit the bank’s charter for renewal in 1811. The key legal and governmental support for economic development in the early 19th century ultimately came at the state, rather than the national, level. When the national bank closed, state governments responded by creating over 200 state-chartered banks within five years. Indeed, this rapid expansion of credit and the banks’ often unregulated activities helped to exacerbate an economic collapse in 1819 that resulted in a six-year depression. The dynamism of a capitalist economy creates rapid expansion that also comes with high risks that include regular periods of sharp economic downturns.

The use of a state charter to provide special benefits for a private corporation was a crucial and controversial innovation in republican America. The idea of granting special privileges to certain individuals seemed to contradict the republican ideal of equality before the law. Even more than through rapidly expanded banking institutions, state support for internal transportation improvements lay at the heart of the nation’s new political economy. Road, bridge, and especially canal building was an expensive venture, but most state politicians supported using government-granted legal privileges and funds to help create the infrastructure that would stimulate economic development.

The most famous state-led creation of the Market Revolution was undoubtedly New York’s Erie Canal. Begun in 1817, the 364-mile man-made waterway flowed between Albany on the Hudson River and Buffalo on Lake Erie. The canal connected the eastern seaboard and the Old Northwest. The great success of the Erie Canal set off a canal frenzy that, along with the development of the steamboat, created a new and complete national water transportation network by 1840.