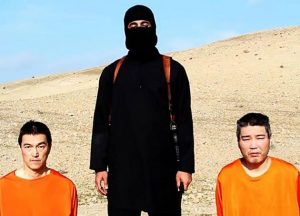 The late Mohammed Emwazi (nicknamed Jihadi John) greatly enjoyed his hobby, which was beheading people. Any infidel would do, though the people he really loathed were naturally former Muslims, guilty of apostasy.

Where was he “radicalised” into such deep hatred? In his youth it may have begun in a mosque or madrassa, but it was his further education in an English university that finally qualified him as a professor of terrorism. Speci­fically, his alma mater was the University of Westminster, but, as I know from long experience, it could have been almost any other British university.

From 1971 to 1996 I was President of the National Secular Society. Muslims had apparently been told that their greatest enemy was secularism, so they assumed I was its representative, and Muslim students in various poly­technics used therefore to request open debates between me and an imam with the gift of the gab. (The polytechnics were later renamed universities, as though on a par with Oxford and Cambridge.)

I always accepted these invitations, but no non-Muslim students ever attended the debates. Those attending included a minority of Muslim women students, who sat on one side of the aisle while all the men scrabbled for seats on the opposite side. This prompted me to write beforehand to each college faculty – none of whom ever showed up at the debates – asking them to support my opposition to segregated seating, but their reply was always that I should put it to the vote at the start of the meeting. When I tried this, the whole audience voted for segregation – even the women. (One of them explained to me later that they would otherwise have been “groped”!)

I was always treated with ultra-politeness, and was asked sometimes whether I objected to a video being made of the proceedings. I made no objection to this, but noticed that the students sometimes saved money by switching the apparatus off when the eloquent imam finished his speech and I began mine. Realising that I was enabling imams to provide videoed sermons for future use, I wondered if I should refuse future invitations, but thought that that might be interpreted as pusillanimity.

We were generally told by the imam that democracy was wrong, as it was the will of Allah that mattered, not of that of human beings. And the high point of the meeting was often the declaration that Britain was likely to become the first Western caliphate.

On one occasion a single English non-Muslim student attended the debate. He came up to me afterwards and said:

I didn’t realise it was as bad as this.

Needless to say, whenever a vote was taken at the end of the debate, the result was a foregone conclusion. But some years later there was an exception to this.

Six mild Mohammed cartoons had appeared in a Danish journal, and, though there was no adverse reaction to them for about four months, Islamic extremists then began publishing exaggerated versions of them in Muslim countries, provoking widespread outrage and murder.

Consequently, the motion chosen for the Oxford University Union Debate of 25 May 2006 was “Free Speech should be moderated by respect for Religion”. Although I was no longer deemed an elected representative of secular­ism, someone must have remembered me, as I was asked to be the secondary opposition speaker, supporting Flemming Rose, the Danish editor who had published the original Mohammed cartoons.

Since there was a seven-figure bounty on his head, security arrangements for the debate were heavy, everyone being searched on the way in.

Had the word “religion” in the motion been replaced by any other abstract noun, we would have won by 188 to nil. Suppose the word had been “science”, the motion reading “Free Speech should be moderated by respect for Science”. No one would have voted for that, least of all a genuine scientist. But religion is still given its unique privileged status, simply because it is the norm.

I had discussed the Danish cartoons with several moderate Muslims, and, while roundly condemning the violent reprisals, they generally added:

But people ought not to insult religion.

Why not? No one ever objects to the ridiculing of political views, which are open to free debate. In fact, true respect for religion would allow it to be opened up in the same way, relying on the truth emerging. But at present the Koran is shielded from honest scrutiny, which suggests that maybe it could not stand up to it!

Should we, then, respect religious faith? Certainly not.

Well, should we respect religious people? Yes, as long as they do not aim to impose their religious views on others, let alone go in for terrorism.

But even if we respect them as good-living people, we cannot respect their beliefs. Faith, which means firm belief in the absence of evidence, betrays human intelligence, undermines science-based knowledge, and compromises ordinary morality. If there were objective evidence for its doctrines, it would no longer be faith: it would be knowledge.

It is obviously impossible to genuinely respect an ideology that our reason rejects as superstition – let alone dangerous superstition; so what the precept to respect religion actually means is that we should pretend to respect it, for the sake of political correctness.

And when the ideologies we pretend to respect indoctrinate children, some of whom may even grow up to be suicide-bombers because of it, hypocrisy becomes complicity in the mental abuse of children, in the oppression of women, in the obstruction of social reforms, and even in incitement to terrorism.

Religion cannot, in all conscience, be intellectually respected if honesty is to prevail over hypocrisy, and giving it false respect is not just obsequious and dishonest: it could actually allow superstitions of the Dark Ages to triumph, destroying the whole range of social and individual freedoms courageously won over the past few centuries. So, for the sake of liberty and equality as well as truth, we must resist the furtherance of hypocritical respect. Far from agreeing to moderate free speech in favour of respect for religion, we should moderate respect for religion in favour of free speech.

We are told that Islam itself cannot be blamed for the crimes of extremists, but that is like saying that the horrors of the Inquisition had nothing to do with Christianity. The statement by Thomas Aquinas that “Unbelief is the greatest of sins” was incontrovertible at that time, hence the Inquisition, the Crusades, and the Christian burning of witches, heretics, and Jews – the flames being fanned by Christian faith.

Mohammed followed on from Jesus, and the Koran contains even more manic denunciations of disbelief than the Bible. Moreover, Islam has failed to moderate its cruel practices to the extent that mainstream Christianity has done in the past couple of centuries.

Moderate Muslims blame misinterpretation of the Koran for all the tyranny and terrorism. If so, why did Allah, or his Prophet, lapse into such ambiguity? Islamic terrorists are certainly extremist, but they are orthodox, for the Koran clearly denigrates women and tells believers to wage jihad against heretics and infidels.,

Muslims, we are told, are sensitive, and are really hurt when their religion is joked about. Don’t they credit their supposed creator god with any sense of humour? Didn’t he actually invent laughter? And is he too weak to withstand a joke without some humourless cleric rushing to his defence? Or is their own faith so weak that they fear its contamin­ation?

Claiming to be ultra-sensitive and really hurt by mere words or pictures is, of course, a way of gaining privilege. Everyone else has to speak softly so as not to hurt you.

The word “appeasement” is rarely used except in the context of Neville Chamberlain’s attempted deal with Hitler in 1938, but what about the ongoing appeasement of Muslims in Britain?
Though of course care must be taken to avoid a native backlash against the mostly peaceable British Muslim community, it is indefensible that succeeding British governments have given Islamic criminals immunity from prosecution. For instance, in 1989 when, even on BBC television, imams were offering bribes for the murder of Salman Rushdie, they were never charged with incitement to murder.

I see that the University of Westminster, faced with the career of its alumnus Emwazi, has announced that in future its staff will attend student meetings to ensure their compliance with the law and good conduct, and that potentially contentious events will be permitted only if other speakers are included to counter “radical” views; just what I requested several decades ago — but better late than never.