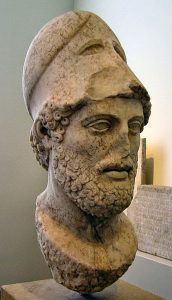 “Fever, headache, sore throat, and vomiting developed in a 65-year-old man.  He had been in excellent health until approximately 1 week earlier, when he had sudden onset of headache, ocular erythema, and halitosis.  On the third day of illness, he began to sneeze and cough, and noted bilateral pleuritic chest pain.  On the sixth day, he developed projectile vomiting of dark, bilious fluid.  At this time, he complained of fever so intense that he would not allow himself to be covered with even the lightest clothing.  He also complained repeatedly of intense thirst.  Although he drank copious amounts of water, his thirst persisted, worsened by frequent vomiting.”

Thus begins a study to determine what may have caused the death of the famous Athenian stateman, Pericles, as a clinical exercise at a 2000 clinical pathologists’ conference at the University of Maryland School of Medicine. Each year, a team of practicing pathologists and historical consultants select a famous individual from the past whose manner of death remains speculative and attempts to derive a definitive cause of death. 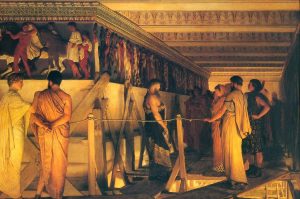 Thucydides reported that desperate patients racked with thirst and fever plunged into cisterns and wells seeking relief. Of the few survivors, some lost fingers and toes from peripheral gangrene, others suffered blindness, and there were also reports of survivors experiencing a complete loss of memory.

Research indicates the disease originated in Africa then spread to the Persian Empire and ultimately to a beseiged Athens via the port of Piraeus where it attacked a population of almost 400,000 condensed into 4 square miles. But which variety of plague was it? 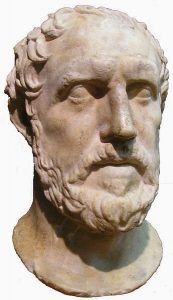 Bust of the Greek general and
historian, Thucydides at the
Royal Ontario Museum.  Image
courtesy of Wikimedia Commons.

In 2006, a research group led by Manolis Papagrigorakis of the University of Athens extracted pathogen DNA from three teeth recovered from skeletal remains found in the ancient necropolis of Kerameikos dated to approximately 430 BCE and assumed to be victims of the great plague.  The only pathogen Papagrigorakis and his team could identify was a strain resembling Salmonella enterica serovar Typhi (typhoid fever).  Papagrigorakis’ report that appeared in May 2006 in Volume 10, Issue 3, Pages 206–214 of the International Journal of Infectious Diseases entitled DNA examination of ancient dental pulp incriminates typhoid fever as a probable cause of the Plague of Athens (full text) was immediately refuted by Beth Shapiro and Andrew Rambaut of the Henry Wellcome Ancient Biomolecules Centre at Oxford University as well as M. Thomas P. Gilbert of the Niels Bohr and Biological Institutes, University of Copenhagen in a letter (full text) to the same journal.

Shapiro points out, “The authors’ diagnosis is based on a similarity score, resulting from BLAST comparisons between their amplified fragments and published sequences. Specifically, the authors report a 7% divergence between their sequences and S. enterica serovar Typhi, and 8% divergence between their sequence and the next most closely-related Salmonella strain, S. typhimurium. Based on the closer match to S. enterica, the authors conclude that ‘‘[if] another, yet unknown pathogen… was the actual cause of the Plague of Athens, it would have to be closely related to S. enterica and definitely closer than S. typhimurium.’’ 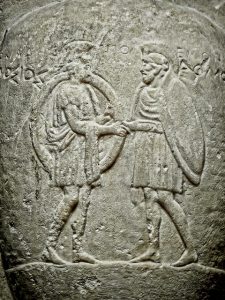 “This statement, however, is simply not true. Although the Athens sequence is indeed slightly more similar to S. enterica, the two cited Salmonella species are actually much more closely related to each other, with less than 1% divergence for the sequenced gene. In fact, if a simple phylogenetic analysis is performed, the ancient sequence is shown to fall outside both S. enterica and S. typhimurium, as well as several other Salmonella species (Figure 1). While this analysis confirms that the Athens sequence is possibly Salmonella, it demonstrates clearly that it is not typhoid (97% bootstrap value). Based on the evolutionary timescale inferred for Salmonella and E. coli, the Athens sequence and typhoid would have shared a common ancestor in the order of millions of years ago.”

Then, in 2013, a thesis, entitled A novel offering of Avian Influenza as the causative agent of the Plague of Athens: contextual and paleopathological analysis of the 5th century BCE Plague of Athens via primary resources and modern DNA sequence-based identification strategies of dental pulp from a mass grave at Kerameikos, was published by Karen Spence.  Although Spence was less critical of the Papagrigorakis team’s conclusions, she pointed out that the sequencing procedure used would not have identified any RNA-based pathogens.  She acknowledged the Maryland pathologists’ conclusions that human-to-human communicated influenza would not have had a high enough mortality rate to be a good match for the Athens pathogen (which had an estimated mortality rate of 25%).  But, she proposes that zoonotic avian influenza passed from domestic poultry to humans would have.  Spence points out that when refugees from the surrounding countryside flooded into Athens, they probably brought smaller animals with them like pigs and chickens.  She proposes that some of the poultry were carriers and quickly infected other birds in the confined quarters.  The animals then passed the disease to their human caregivers.  Birds often carry the pathogen without succumbing to the disease themselves.  Even if some of the birds died, they were probably eaten, due to the conditions of the siege.  She postulates that an infected reservoir of birds would have retained the pathogen over a long period of time accounting for several years of plague rather than a flare up that would quickly die down as in the case of human-to-human transmitted influenza. 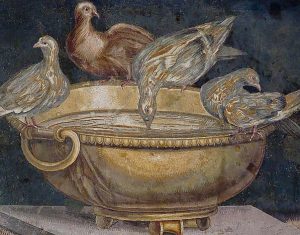 Roman mosaic of doves drinking from a bowl from 2nd century BCE
Greek original by Sosos recovered from Pompeii.
Photographed at the Capitoline Museum in Rome, Italy by Mary Harrsch
© 2009

Although Spence makes a convincing case, she indicates in her table comparing symptoms of  the Athenian plague with Typhoid Fever and Avian Flu that neither pathogen usually results in the survivor pathologies described by Thucydides.  It is the survivor pathologies that are carefully addressed by the Maryland pathologists in their conclusion that the most likely causative pathogen was typhus and why I find the Maryland analysis most convincing.

Since avian flu cannot be transmitted from human to human, I was also skeptical that Pericles, a wealthy statesman, would have had contact with chickens, other than to eat one.  Likewise, I would doubt his household steward would resort to obtaining a dead chicken from a lower class meat market that may have procured diseased carcasses. I also question why the disease would first appear in Piraeus, the port, as most refugees came from the surrounding countryside. The affliction was also reported as previously occurring in Ethiopia and Persia.  Neither location suffered from siege concentrations where poultry may have been in particularly close contact with humans.

Of course there is the possibility the besieged Athenians imported poultry as a protein food source since they no longer had access to cattle that were left behind in the fields. But it is more likely that being a seafaring people, they would have relied upon fish instead.

However, I appreciated the comparative table Spense uses to clearly demonstrate typhoid fever’s lack of many of the attributes of the plague described by Thucydides.  I would have liked to have seen such a table covering all 29 pathogens that have been proposed over the last 150 years of study.

In my research I also found an interesting article about new DNA extraction techniques developed in just the last five years that were used on victims of the Justinian plague at the Ancient DNA Centre of McMaster University in Hamilton, Canada.  It made me wonder if the new method would be more successful with the Athenian samples.  I would also like to see an attempt made specifically on adult females from the Kerameikos remains. Thucydides recorded that caregivers suffered an extremely high rate of infection and mortality and in ancient Athens, as today, most caregivers would have been female. There did not seem to be any reference to gender in the Papagrigorakis report. If gender was not considered I think this could be a significant barrier to more conclusive results. 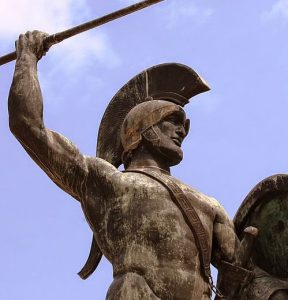 At the time of the plague, Athens was besieged by Sparta and male corpses from the ongoing conflict could have been included in the mass burial. Some historians would disagree on this point because death in battle would have a significant element of honor involved and mass burial of such individuals would have been particularly impious. But, a community in the grip of a severe plague where there were large accumulations of unburied corpses and a shortage of able bodied men to dispose of corpses, could have resorted to mass burial of at least some war casualties.  Thucydides said the population of Athens was so morally distressed by the plague that funerary rituals were “universally violated” (History of the Peloponnesian War – 2.52.3) – clearly supporting the possibility of mass burial, even of war casualties. Also, the Papagrigorakis study was conducted on only three teeth from randomly chosen victims apparently without regard to gender.  I would feel much more confident in the results if more victims were sampled.

Of course, we cannot even be sure the mass burial at Kerameikos was even a result of the so-called Athenian plague. Although excavators dated the burial fairly precisely to 430 – 426 BCE, dating methodologies are not so precise. The burial could be from an epidemic occurring before, concurrent with, or after the plague onset. The crowded siege conditions could have easily resulted in several concurrent diseases that would not necessarily include the pathogen responsible for the symptoms reported by Thucydides and observed in Pericles.