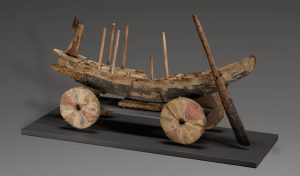 A wooden model of a ship-cart excavated at Gurob, Egypt, is the single most important piece of evidence for a now-lost warship design that was decisive in Mediterranean history. 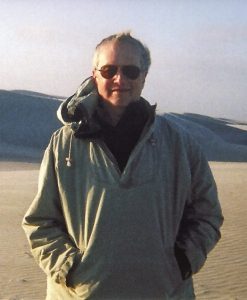 Ancient Egypt conjures visions of towering monuments and glittering gold, but it’s often the small, unassuming archaeological finds that yield the deepest insights. The exhibition Beyond the Nile: Egypt and the Classical World explores some of these underappreciated objects and what they can tell us about the complex interactions among ancient Egypt, Greece, and Rome. This small wooden ship-cart model from an Egyptian tomb is one example.

In 1920 the great Egyptologist W.M. Flinders Petrie excavated at Gurob, a site located at the entrance to Egypt’s Fayum district. One tomb contained a wooden ship model, together with pieces that had come off it. The model replicates a Late Bronze Age Mycenaean Greek warship, probably a pentakonter (fifty-oared ship). The “Sea Peoples”—a term used to describe the coalitions of migrating peoples who factored into the end of the Bronze Age, around 1200 B.C.—adopted and adapted this ship type, as we can see from the dramatic naval battle portrayed on the outer wall of Ramses III’s mortuary temple at Medinet Habu. 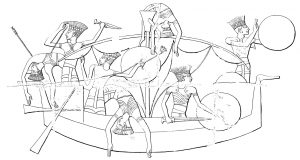 Reaching the Near East during the Sea Peoples’ migrations, this vessel served as the prototype for later galleys (oared ships) built and used by both the Greeks and the Phoenicians. When Greek triremes defeated Phoenician triremes at Salamis in 480 B.C., both vessel types descended from the same original Mycenaean pentakonter, making it arguably one of the most significant ship designs in history.

Unfortunately, no shipwrecked hulls of such a Bronze Age galley have come to light, so the Gurob model remains our single most important piece of evidence for understanding these remarkable vessels. Put simply, if Helen of Troy’s face launched a thousand ships, then at present the Gurob model is the nearest we can approach that ship type.

The model, together with some of its detached pieces, were all that Petrie’s assistants found in the tomb. Prior to its interment, someone had disassembled the model and broken the hull in two, apparently intentionally. A number of the model’s parts are missing. The model retains its forecastle, however, although the fence is missing. The stem ends in a typical Mycenaean bird-head device, with a strange vertical beak known from other ship depictions. A structure now indicated solely by patterns of missing gesso, would have existed in the stern also.

Significantly, the model documents well the supporting stanchions postulated previously solely on the basis of two-dimensional representations of this ship type: the model has both miniature stanchions and rows of holes piercing the upper edges of the model’s caprail (upper edges of a ship’s hull), indicating their placement.

Four painted wheels, together with additional evidence, indicate that the model originally could have been displayed with a wagon-like support structure. At first glance, one may be excused for assuming that the model served as a child’s toy. One would be wrong, however. 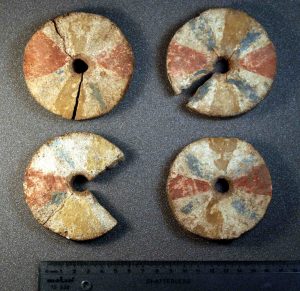 A diminutive decorated rectangular slip of wood, pierced at its center, was meant to sit beneath the hull. In this manner, the piece could be attached by means of a peg to a hole cut into the underside of the hull amidships. But what does this piece represent? 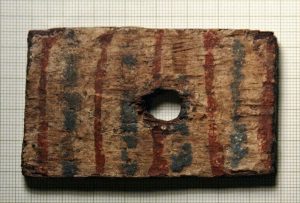 In ancient Egypt, people depended on the Nile as a main transportation superhighway. It is hardly surprising, then, that watercraft played an integral role in Egyptian religious life. Egyptians had the periodic need to transport ships overland, for three primary reasons: for funerary rituals, to move gods in ship-shaped palanquins, and for divination. The normal manner of carrying these cult “ships” overland was on the shoulders of porters, by means of long poles. The carrying poles required a base for attachment, as well as for the support of the ship itself: the Egyptologist George Legrain termed this base a pavois (French for “shield” or “buckler”). 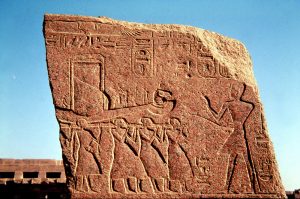 The appearance of this modest slip of wood, representing a pavois, on the Gurob model is highly significant. It indicates that the model is no simple child’s toy (my original assumption), but rather a cult vessel. It also points to a syncretism in which a European cult that used such “ship carts”—likely the cult of Dionysos—is seen in the process of assimilation as it adopts Egyptian cultic affectations. The cultic nature of the model also explains why the model and its parts were found alone in the tomb: the model may have been buried by itself due to its cultic significance.

The wheeled-cart aspect of the model is decidedly un-Mycenaean. The model’s wagon belongs to a cultural phenomenon of cultic objects that appear in the twelfth century B.C. in the Aegean world, apparently arriving from farther north in central Europe. In fact, the Gurob model should not be understood as replicating an actual ship. Rather, it represents a land-based cultic ship (cart) that had been patterned after an actual ship, in this case apentakonter. Put simply, the Gurob model is a copy of a copy. And while the Gurob model was thus twice removed from the original war galley that served as its prototype, the information that the model supplies regarding the transfer of cult in the seam between the Late Bronze and Iron Ages cannot be overemphasized.

The Gurob model also bears painted decoration, which imbues it with additional value, contributing to our understanding of the color epithets employed by Homer when describing the ships of his heroes. We literally see what Homer meant by his “black” ships: he refers to the pitch on the ship’s hull as seen on the model. 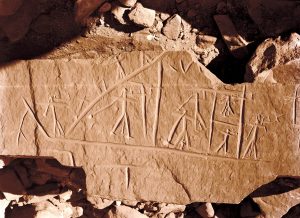 The Gurob model must be considered in relation to the only other iconographic sources for Aegean galleys known from Egypt: the naval battle depicted on Ramses III’s mortuary temple at Medinet Habu, and a remarkable graffito from Dakhla Oasis, which depict these vessels employed in warfare and cult.

The Wilbour Papyrus, a cadastral document concerned with documenting the ownership of land for taxation purposes, together with additional textual evidence, indicates that one group of Sea Peoples, the Sherden, lived in and around Gurob contemporaneous to the model, raising the likelihood that the model belonged to someone of Sherden descent.

In researching the Gurob model for my book The Gurob Ship-Cart Model and Its Mediterranean Context, I enlisted the help of Dr. Donald Sanders, president of the Institute for the Visualization of History. Donald and his colleagues built a free-access companion website for my book on the Gurob model that includes fully rotatable 3D virtual models of the Gurob model as found, together with two possible reconstructions: one with the model mounted on wheels and the other as it might be constructed to be carried by porters. Building the virtual model proved to be remarkably valuable in the research stage. We learned, by error, for example, that the wheels had been made as two pairs. When the pairs were mismatched, the model stood unevenly. The website also contains maps, satellite photos, and a complete collection of high-resolution color images of the model and its parts, which appear in black and white in the book. 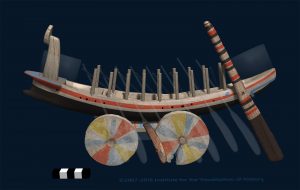 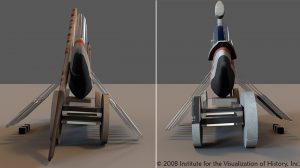 We learned, for example, that the wheels had been prepared in “sets.” This became clear when we originally mismatched the wheels. Courtesy of the Institute for the Visualization of History. Images: D. Sanders

Unless and until someone discovers, excavates, and reports on a Mycenaean or Sea Peoples galley, the Gurob ship-cart model may be the closest we will ever come to this truly remarkable ship type, which played such a significant role in the changing the course of world history at a critical juncture.