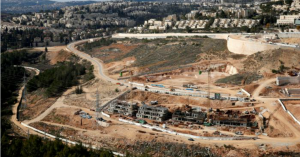 “The Trump administration is giving Israel the green light to entrench a separate and unequal one-state reality with more illegal settlements.” (Photo: Reuters)

“Once again, the Israeli government has proved that it is more committed to land theft and colonialism than to the two-state solution and the requirements for peace and stability,” said Hanan Ashrawi of the Palestine Liberation Organization in a statement.

“It is evident that Israel is exploiting the inauguration of the new American administration to escalate its violations and the prevention of any existence of a Palestinian state,” Ashrawi added.

The act is in direct defiance of a United Nations resolution last month that deemed the settlements illegal, as well as a rebuke to the Obama administration’s critique of Netanyahu’s support for settlements.

President Donald Trump has taken extreme right-wing stances on Israel, advocating for moving the U.S. embassy in Israel to Jerusalem and choosing an ambassador with close ties to the settler movement.

“The Trump administration is giving Israel the green light to entrench a separate and unequal one-state reality with more illegal settlements,” commented the group Jewish Voice for Peace on Twitter.

Indeed, the Associated Press reports that “Oded Revivi, the chief foreign envoy of the [West Bank’s] Yesha Council, said in a statement Tuesday he hoped the announcement ‘is just the beginning of a wave of new building[…] we hope to continue building a peaceful future with the blessing of the new Trump administration.'”

“We are building and we will continue building,” said Netanyahu on Twitter, according to Middle East Eye, which reports that the prime minister plans to continue expanding settlements in the West Bank and to eventually bring all settlements under Israeli sovereignty.

Meanwhile, the Trump administration is also reportedly already in early talks with Israel about moving the U.S. embassy from Tel Aviv to Jerusalem, bucking decades of U.S. foreign policy and international consensus. “The Israeli right is almost in a state of political euphoria” about the prospect, observes Palestinian author and commentator Ramzy Baroud, while warning that such a provocative move will “certainly and explicably lead to violence.”