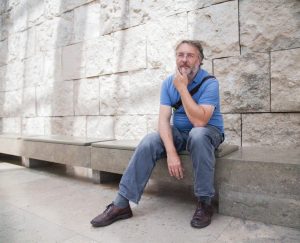 The English photographer on his enigmatic, human images and experimental working methods

Working at large size—his prints are four feet wide and up to six feet tall—photographer Richard Learoyd creates striking, lifelike portraits and still lifes that reveal every pore of skin and mote of dust. “A photograph should have the ability to communicate a sense of humanity,” he says, “and it should have an internal narrative that allows you to walk away with a question or two in your mind.”

For the last ten years Learoyd has been working primarily inside his London studio. Using a room-sized camera obscura with a fixed lens, he exposes images directly onto large photo paper. An exhibition at the Getty Museum, Richard Learoyd: In the Studio (August 30–November 27, 2016), features a selection of his figure studies, still lifes, and portraits. At the exhibition preview, the artist took my questions about his working process and how he creates mood and story in his pictures.

Tristan Bravinder: Your work is very large in scale—often six feet tall. What draws you to work at this size?

Richard Learoyd: If you look at contemporary photography in the round, my pictures are actually positively bijou these days. There’s a lot of photographs that are a lot bigger than mine!

I think the reason why I like to make pictures that size is because when you stand in front of them, they encompass your field of view. Small photographs tend to end up being like little windows. And these [large] things are just more of a vista.

I don’t actually like unnecessarily large photographs. A lot of artists make things big that should be small, and small that should be big. But that’s their thing.

Tell me a little bit about color and the role it plays in your work, and in the narratives you create.

Color photography is easy to trivialize as a poor rendition of the real world. And the color in my photographs is in no way naturalistic.

What I’ve learned over the years is that when you create a field of view for somebody—what we were just talking about—they make the color up for themselves. People’s eyes adjust, and they self-correct the nuances of color for themselves.

I have a tendency to use reds. I’ve got a tendency to, you know, suck a lot of color out in favor of detail. I’m interested in multifaceted skin tones rather than this sort of Kodak, Fuji peach. Especially with digital cameras, they seem to emphasize Western skin tones, in neutral, boring palettes, whereas with Cibachrome material or things like that, you have a skin tone made out of purples, and greens, and reds, and blues, which is actually how people are. People’s skins aren’t all peach or brown or black or yellow. 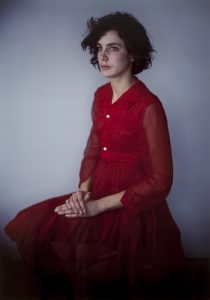 Many of your photographs have a shallow depth of field, with some details very crisp and others in soft focus. Tell us about that choice.

When you’re using lenses that throw circles of a meter or two, the nature of that type of photography is a shallow depth of field. It’s the laws of physics: you can’t do anything about it.

In your photographs you position both people and objects against a plain background. Why?

It’s going back to the spirit of the blank canvas—the idea of bringing things into an environment and making it work. Like a painter’s got to make a first mark, I’ve got to bring things to the studio. I’ve got to create this little theater.

I’ve tried making pictures with dark red backgrounds and black backgrounds. And photographically, there’s something that works about that white, the gray and the white. The gray is actually just a white wall, and the light’s facing away, so it renders as gray.

I read that you purchase second-hand clothes for your models.

Sometimes. My studio is on Brick Lane in London, and around there, there’s a flourishing business in “vintage” shops—rag shops, you know.

I used to just get people to bring their own clothes. But a lot of these people are earning people. They’re not going out every day and buying outfits; they’re students or they’re working jobs. So [buying clothes] was for a variety. And now I quite enjoy it. Also, some fabrics render very well, and others don’t. I’ll pick something for a color or for a texture.

A lot of modern clothes can date things really quickly: “Oh, that was, 1984.” That’s really important to some people’s work, but I like it when they’ve got a little longevity to them. 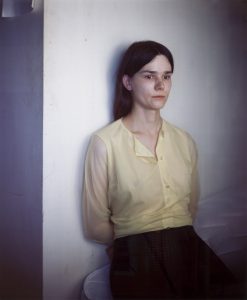 You’ve said that you like your photographs to have an “internal narrative.” What does this mean?

Well, that’s interesting, because a lot of people would use the word “enigma” as another description for “internal narrative.” Enigma isn’t always the product of intent. You can try and prescribe success, but you can’t always promise enigma.

Physical imperfections, like dust or remnants of makeup, often appear in your work. Why does that appeal to you?

Because people aren’t perfect. Simple as that. It’s anti-Photoshop. I’m not interested in smoothing people out. I’ll choose people purposely because of their scars and their imperfections. I like things like that in photographs; it’s human.

You come across your models in an unusual way.

I often get other people to look for people to photograph—I think I’ve only asked someone once or twice. I’m quite shy. I have assistants of mine let people know that I’m not some guy who’s trying to do something odd.

It helps that people come already primed: they know I’m a serious person, they know what they’re going to be involved with, and that it can be an enlivening experience. At worst, they get paid and they’ve had an experience. So it’s a pretty simple transaction to start off with.

But the more you photograph people, the more complicated the relationship becomes. There are a few people who I’ve photographed for quite a while. We’ve become friends, and the will to photograph them has sort of dwindled, because I know them too well. I think you need a little distance—for me anyway—a little objectivity, a little meanness, in a way, to manipulate people or try to make them into things that you wouldn’t do to a friend. I don’t think I’ve ever tried to make somebody more ugly or more mean looking, but I like to engage with those sittings in a constructive way. I like to move things along, and that’s sometimes difficult with friends. 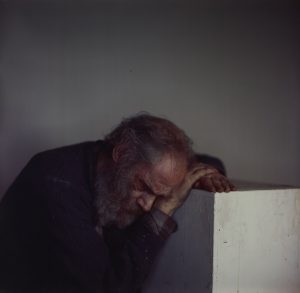 Tell us how you came across Andrew, who features in the moving photograph Andrew on Plinth.

Andrew died maybe a year ago. He was a very nice man; he was my assistant’s neighbor. He came from a pretty illustrious, aristocratic family. But, you know, he had issues. I thought he looked a little like Tolstoy; there was a real character to his face, and he carried himself in a very upright manner. And he just resonated with me. I was very sad to hear of his passing.

In addition to portraits, you also create still lifes. What draws you to this genre?

The camera [obscura] is a light room and a dark room, with a lens in between. So if you’re going to photograph something, it’s going to be an object, or it’s going to be a person, pretty much. So I think the nature of the process lends itself to still-life things. There’s an inevitability to it.

When I first started making these pictures, I didn’t think the camera would be a portrait tool. I thought it would be just a still-life camera—because things don’t move and people do.

When you’re working in a tradition, you have to reinvent it for yourself—what means something [to you], what resonates, what works with the process. The nature of the process is very detailed: it’s quite good at communicating volume of objects, weight, whereas a lot of other photographic processes don’t lend themselves to communicating those physical properties in quite the same way. 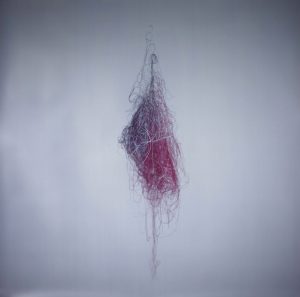 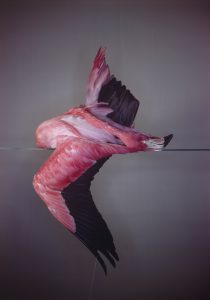 I’ve noticed your still-life images of dead animals, like the flamingo and the cuttlefish in the exhibition.

Where do you acquire those?

They usually come from taxidermists’ supplies; they’re called “skins.” A lot of museums have skin collections. There’s one in England; the Natural History Museum is in a place called Tring.

The bird in this show was destined for that museum, but maybe wasn’t quite perfect enough. It was a wire kill—flamingos that fly into wires and are electrocuted.

So the flamingo was not a taxidermy skin.

No, they come frozen. It’s quite freaky. But the fish, the cuttlefish—for a while, I lived in Greenwich in East London, and on my way to work, I used to cycle past the fish market, so I’d just stop and get something to photograph.

Let’s talk about your influences. You’ve said that you’re more interested in visual culture broadly than in the history of photography. Why is that?

I’m interested in photography, but there’s a lot more to the art world than just photographs. I find painting inspiring. I find sculpture interesting. And I don’t want to narrow down to just looking at other photographers’ work. It just seems a little nepotistic.

Yeah, because photographs have to stand up for themselves in the context of the broader art world. And I think if you’re only looking at photographs, it can be a bit of a problem. Photography has got to grow up. It’s got to put itself in rooms with other media, and they’ve got to find a way to work.

Tell us what you’re working on now.

The materials [for my studio work] are running out. The Ilfochrome paper—it doesn’t exist anymore. I have a stock of it, but every time you take a picture, you know, it’s eroding. So I used to run the machinery pretty much all year, but now I tend to run it in three- or four-month bursts when I’ve got things and people I really want to photograph.

Ten years ago, if I got an image on a piece of paper, I was happy, because there were a lot of technical things to overcome. Now I know what I’m doing technically with that process, but then you really have to have something to say with the picture. Both sides have got their problems.

I like photography that’s sort of inventive and on the edge of disaster. I’m courting catastrophe all the time.

What do you hope visitors will take away from your exhibition here at the Getty?

That’s a tricky one. I hope people like the pictures. I hope they appreciate some of the aspects of their making. And I hope that getting to look at people very closely, especially in the portrait pictures, that they take away a positive experience.

I think a lot of people want art to shout at them or to tell them something. What I’m looking to do is influence them in a slightly quieter way, more humanitarian, more humanistic.