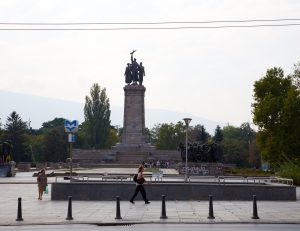 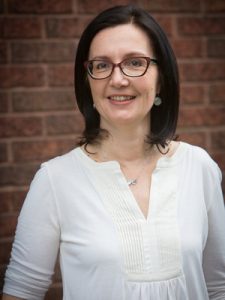 Just what to do with all the Soviet-era monuments in eastern Europe after the fall of the Berlin Wall in 1989 has been a topic of popular fascination and discussion. What is most striking in the post-socialist reincarnation of these imposing structures is the seeming randomness of how the monuments have been dealt with across the former “Soviet bloc:” some blown up or knocked down, others shunted off to museums, and still others left standing and re-purposed for today’s political and cultural needs. 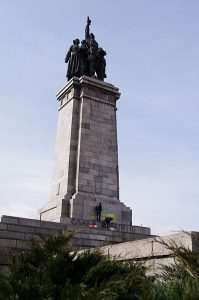 The demolition of the Berlin Wall—as well as the removal of Lenin’s statues, images of local communists, and red star symbols—have come to represent a radical rupture with the hated communist past.

But, there are more subtle architectural traces remaining in various regions that reveal the surreptitious perseverance of communist-era symbols. These persistent remainders of the communist past are particularly important given the intense nostalgia for the communist past that seems to have enveloped much of the former Soviet bloc 25 years after the end of the cold war.

The Bulgarian communist leader Todor Zhivkov was removed from power on 10 November 1989, a day after the fall of the Berlin Wall. Soon after that, when citizens gathered in public squares to demand reforms, one of the main targets of popular wrath was the Communist Party Headquarters in the center of Sofia. It was a monumental building done in the socialist realist style that had been erected in the late 1940s after the demolition of much of downtown Sofia by United States aerial bombardments during World War II. 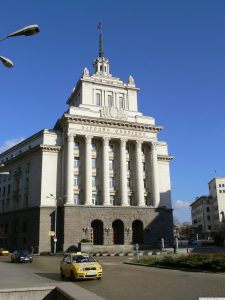 Soon, removing or destroying the remnants of communist monumental architecture became a liberating experience to many Bulgarians.

In August 1990, in the midst of increasingly vocal demonstrations, a young man threatened to set himself on fire if the enormous red star on the top of the Communist Party Headquarters was not taken down immediately. After the building was stormed and set on fire, in an apparent victory of popular rage against the symbols of communism, a helicopter removed the red star to an undisclosed location.

The enormous statue of Lenin facing the Headquarters had a similar destiny, replaced by a newly commissioned image of St. Sofia, the namesake of the capital.

The star and other communist-era monuments have now found a new home in the Museum of Socialist Art. When the museum opened in 2011, two decades after the emotional showdown in 1990, the passions of the early reform years were all but forgotten. And secured away in a museum, the monuments seem no longer to have the power to whip a crowd into a fury. 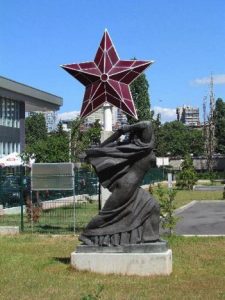 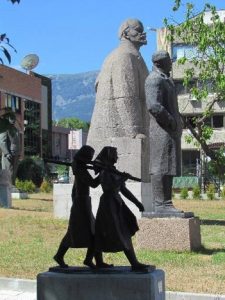 While those monuments were dealt with rather quickly, the mausoleum of the Bulgarian Stalinist Georgi Dimitrov, also built in the late 1940s, was neglected for many years. Abandoned, boarded up, covered with graffiti, and used as a public latrine, it became an embodiment of the confusion of the “transition” process altogether. 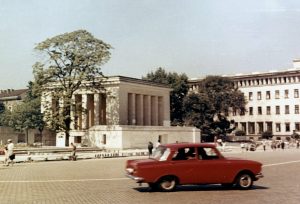 Its chaotic, uncoordinated, un-discussed, and ultimately uneventful removal in 1999, which took four detonation attempts to accomplish, represented the lack of public engagement in the discussion of the communist past. By that point, with a center-right government in power, Bulgarians took it for granted that a Stalinist monument did not belong opposite from the National Gallery, once a royal palace.

Yet, the seemingly radical eradication of Soviet-era monuments in Bulgaria was accompanied by the quiet persistence and survival of others that, at first glance at least, might have been deemed as more of a Soviet imposition.

Monument of the Soviet army in Sofia

Because the site served as a focal point of official celebrations of Bulgarian-Soviet comradeship until the end of the cold war, in 1993 the Sofia municipality voted on its removal. But the decision was never carried out despite the fact that giant scaffolding was erected to begin demolition.

In recent years, the monument has become an object of popular frustration, as street artists conveyed their uneasiness with a Soviet army monument dominating a popular park in downtown Sofia. The monument became a canvass for the expression of anti-Russian and anti-Soviet sentiment (and this in the country with the most favorable pro-Russian opinion in the entire European Union).

In 2011, residents of Sofia woke up to find the Soviet army soldiers reincarnated into American comic and pop art figures.

Graffiti now transformed the fierce Soviet soldiers into the more benign and colorful Ronald MacDonald, the Joker, Captain America, Superman, or Santa Claus. As a slap in the face to Russian sympathizers, an American flag replaced the original Soviet one. This composition, titled “In Step with Time,” was featured extensively in western media and won awards at international art festivals.

The anonymous artists became trendsetters, initiating a series of transformations of the monument that fascinated residents of Sofia and the press.

In 2012, undisclosed activists used the monument to protest the arrest of Pussy Riot (as seen above) by placing the distinctive colorful balaclava masks of the Russian punk collective on each of the Soviet army figures.

In 2013, another transformation saw the monument painted pink (above) and marked with the words, in Bulgarian and Czech, “Bulgaria apologizes.” The intention was to commemorate the anniversary of the Warsaw Pact invasion of Czechoslovakia in 1968 , with the participation of Bulgarian troops.

In 2014, as the crisis in Ukraine was unfolding, the base of the monument as well as the figure of Aliosha, the model Soviet soldier, were colored in the yellow and blue colors of the Ukrainian flag (as seen above).

Other reincarnations included the “anonymous army” of the hacker group Anonymous; red-and-white Polish symbols for Katyn; and the “hands off Crimea” sign after the Russian occupation of the area. Most recently, in September 2014, on the eve of the Bulgarian parliamentary elections, a PM candidate was arrested together with her three accomplices as she spray-painted “Occupiers!” on the structure. 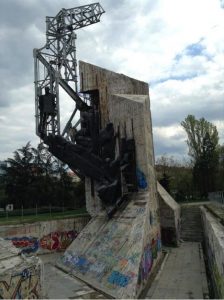 Even more striking is the neglect of the 1300 Years Bulgaria monument in the National Palace of Culture (NDK) park (at right, photo by author). Built in 1981 to commemorate the anniversary of the establishment of the Bulgarian state, the original monument combines cherished historical symbols from medieval times with allusion of the glorious future of communism.

Yet, after 1989, this monument symbolizing national values has been left to the elements. The homeless and drug addicts used its underground areas. Since the granite plaques covering the concrete body started falling, the Sofia Municipal authorities fenced it off to prevent a fatal incident, while trying to decide the future of the monument.

The entire area around NDK, which still serves as a convention center and concert hall, is in disrepair. The fountains are not functioning and the convention center building is in a dire need of renovations. Skateboarders have overtaken the park. 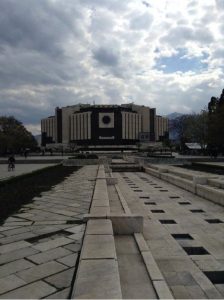 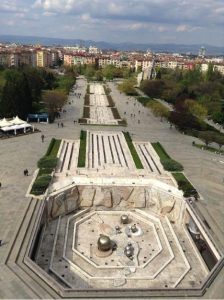 Views of the National Palace of Culture (NDK) from the 1300 Years Bulgaria Monument and of the monument from the top floor of NDK. Both photographs show the empty fountains in the NDK park. Immediately behind the 1300 monument in the second picture (shown in the back right) one can discern the imposing building of the former Communist Party Headquarters. Photos by author.

Ironically, the NDK park is also the home of the Memorial of the Victims of the Communist Regime in Bulgaria, inaugurated in 1999. Yet, the scale of that monument is rather modest by comparison and, located to the side, it does not enter into a visual dialogue with the communist-era mega-structure. 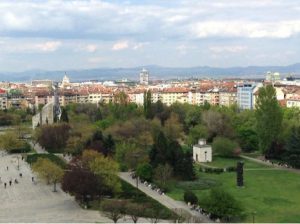 The Memorial of the Victims of the Communist Regime in Bulgaria, a black marble plaque featuring the names of those executed by the People’s Court, is located next to the small chapel on the foreground. Located behind the trees, it is not visible from the street level or from the 1300 monument (shown in the background on the left). Photo by author.

Yet communist-era monuments need not be defaced, removed, or left to nature. Take the Founders of the Bulgarian State Memorial, built on a hilltop in Shumen, in northeastern Bulgaria. Like the decrepit Sofia monument, it was built to commemorate the 1300 anniversary of the establishment of the Bulgarian state, but it fared much better after 1989. 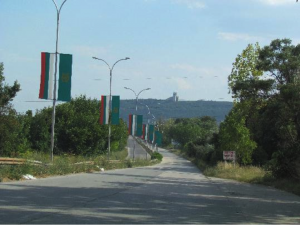 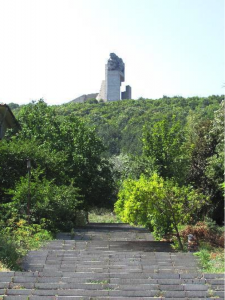 Views of the Founders of the Bulgarian State Memorial when entering the city of Shumen from the highway and from the city center where the 1300 steps to the monument begin. Photos by author.

The memorial, also inaugurated in 1981, consists of six sculptural compositions depicting the achievements of the medieval Bulgaria state. The figures include, among others, the founder of the Bulgarian state Khan Asparukh, pointing his sword to the ground to declare, “This is where Bulgaria will be!”; King Boris I the Baptist who christened the pagan Bulgarians; Cyril and Methodius who codified the first Slavic alphabet; and Tsar Simeon who challenged Byzantine domination in the Balkans. The enormous figure of the lion on the top symbolizes the might of the Bulgarian state. The glass mosaics add color and light to the composition. 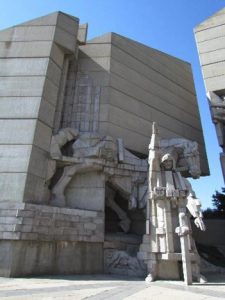 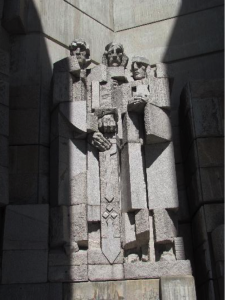 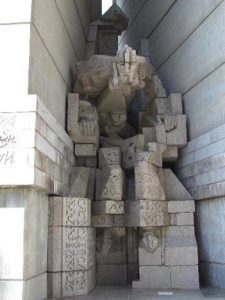 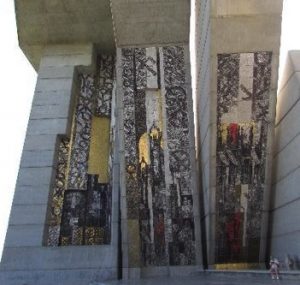 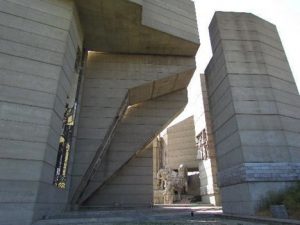 Selected views of the Founders of the Bulgarian State Memorial. Note the human figure sitting in the picture to the right (with stained glass) for scale. Photos by author.

In stark contrast to the inactivity of numerous Sofia mayors, the Shumen municipality has maintained the monument, turning it into a popular weekend and wedding destination. Entrepreneurial mayors have managed to take advantage of the numerous tourists from Russia, Israel, and Western Europe that flock the nearby Black Sea resorts around Varna, and there are regular bus tours to the top of the hill.

The site now also hosts a welcome center, a natural history museum, a medieval fortress, a restaurant, and numerous biking and hiking trails. By all account, the city of Shumen has managed to use this communist-era monument to its advantage by creating a steady stream of tourists to the area.

What is the reason for this uneven treatment of the Soviet-era monuments in post-socialist Bulgaria? How is it possible that, in the capital Sofia, a monument symbolizing the national rebirth and resilience of Bulgaria over 13 centuries was allowed to fall apart, while the one of the Soviet Army remains?

The contradictions associated with Soviet-era monuments are perhaps typical of the uneven process of post-socialist transition in Bulgaria, handled in haphazard, random ways that often left people perplexed and confused.

Besides the occasional anti-communist or anti-Russian showdown over the monuments, ordinary Bulgarians, occupied by their everyday problems 25 years after the fall of communism, have long ceased to notice these features of their urban space.