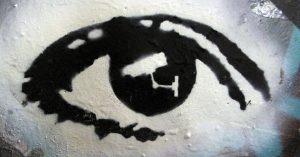 The ruling “makes clear that blanket and indiscriminate retention of our digital histories — who we interact with, when and how and where — can be a very intrusive form of surveillance that needs strict safeguards against abuse and mission creep.” (Photo: duncan c/flickr/cc)

The European Union’s highest court on Wednesday issued a landmark ruling against mass surveillance in a judgment that challenges key portions of the U.K.’s so-called “Snooper’s charter,” a sweeping surveillance bill that was set to become law by the end of the year.

The decision by the Court of Justice of the European Union (CJEU), which directly calls into question both the British law and a similar bill in Sweden, finds that indiscriminate storing of private citizens’ communications data is illegal under EU law.

The court’s ruling finds that data retention is only allowable when government agencies are investigating a “serious crime,” such as terrorism.

The “general and indiscriminate retention” of emails allowed by the the “Investigatory Powers Act,” or Snooper’s charter, is therefore illegal, the Guardian reports.

“Today’s judgment is a major blow against mass surveillance and an important day for privacy,” said Camilla Graham Wood, legal officer with the rights organization Privacy International. “It makes clear that blanket and indiscriminate retention of our digital histories — who we interact with, when and how and where — can be a very intrusive form of surveillance that needs strict safeguards against abuse and mission creep. Unfortunately, those safeguards are not present in the Investigatory Powers Act, which is why it’s a Snooper’s Charter.”

The finding came in response to a legal challenge initially brought by the Brexit secretary, David Davis, when he was a backbench MP, and Tom Watson, Labour’s deputy leader, over the legality of GCHQ‘s bulk interception of call records and online messages.

Davis and Watson, who were supported by Liberty, the Law Society, the Open Rights Group and Privacy International, had already won a high court victory on the issue, but the government appealed and the case was referred by appeal judges to the [CJEU]. The case will now return to the court of appeal to be resolved in terms of U.K. legislation.

The long-awaited judgment “raises significant questions about whether vast swathes of the [Snooper’s charter] should now be repealed,” observes Privacy International.

The advocacy group summarizes the key portions called into question by the decision:

“In addition to rejecting generalized retention and narrowing down access to serious crime with independent authorization, the CJEU has further established that as a rule only the data of people suspected of direct involvement in […] crimes can be accessed,” observes the U.K.-based Open Rights Group. “Accessing other people’s data must be an exception and also based on specific evidence of how this may help investigations.”

Wood added: “The court has rightly recognized that our communications data is no less sensitive than the content of our communications. This is something that the U.K. government has willfully ignored, allowing a large number of public bodies to access our personal data without a warrant. The government must now urgently fix the Investigatory Powers Act, so that access to our data is properly authorized.”