Eighty years ago, on 30 November 1936, a huge fire lit up the night sky over London. The Crystal Palace in South London had caught fire and as the colossal structure blazed, Londoners had a preview of what many would experience four years later in the Blitz: orange skies visible from miles away and, closer to, the desperate struggles of fire-fighters to tackle a blaze beyond their capacity.

Winston Churchill, who was one of thousands who gathered to watch the blaze, spoke for everyone when he called it “the end of an age”. The structure whose wreckage Londoners assembled to see on 1 December 1936 was, by then, over 80 years old and a throwback to the high Victorian era.

Designed by Sir Joseph Paxton, it was a revolutionary pre-fabricated building made of glass, wood and steel, originally erected in Hyde Park to house the Great Exhibition of 1851. (Paxton drew on greenhouses that he had designed for the Duke of Devonshire, whilst employed as the Duke’s gardener at Chatsworth.)  After the Exhibition, the Palace was dismantled and re-erected in parkland on the heights of South London – to a new and even larger design – where it formed the centre of an entertainment and exhibition complex for nearly a century, hosting choir concerts, dog shows (and the world’s first cat show), pantomimes, a grand Festival of Empire, motor racing, religious sermons, balloon ascents, Scout festivals, FA Cup finals, fireworks displays… a huge range of activities, some improving and some frivolous.

Its 80 years’ presence in the capital mean that the Crystal Palace, though long gone, left many traces: an area of London, a railway station and a football club still carry the name (though thousands of away fans have cursed the fact that Crystal Palace FC now play a couple of miles further south, convenient for two railway stations but notfor the one named Crystal Palace).

Within the Wellcome Library’s holdings, a print of the Palace from the south shows, in front of it, the fountains and cascades down the hillside that were a feature of the grounds and, right at the front, a group of dinosaurs: an area around the lake at the bottom of the park was designed to demonstrate then-new discoveries in geology and palaeontology, for which the sculptor Benjamin Waterhouse Hawkins created a series of figures depicting extinct life forms. 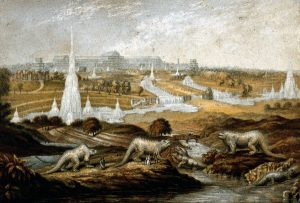 The dinosaurs are the only remaining original feature of the park and are a much-loved link to its past, even boasting their own Facebook page. Hawkins himself is represented in the Library’s archive collections by pieces of correspondence in various locations, most notably in MS 5383 which contains an invitation to view the sculptures he is constructing on “Mud Island”. (The name of Hawkins’ house, which still stands on Belvedere Road near the park, is given by him as “Fossil Villa”.)

The frivolous side of the Palace is not neglected in our holdings either. The diaries of James Patterson, a young teacher of the “deaf and dumb” (to use the terminology of the time), include in MS 7353 a rich description of a visit to London over Christmas 1858, in which he visits the Palace and takes in events that include a black musician playing the violin in a virtuoso fashion that foreshadows Jimi Hendrix: behind his head, between his legs and so forth. 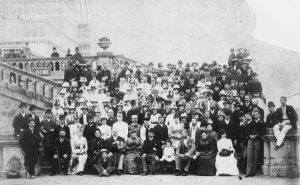 And a photograph in the Wellcome Foundation’s own archives (WF/M/I/ND/08/03) shows the 1888 Burroughs Wellcome staff outing, which took place that year to the Crystal Palace. About a hundred employees pose for a group photograph on the steps of the Palace, the women in their best huge Victorian hats and the men in dark clothes and bowlers (or, the more dashing, pale trousers and boaters), Burroughs and Wellcome themselves visible in the crowd. It is an image that can perhaps stand for all the years of jollity that the Crystal Palace gave to Londoners: gone but not forgotten.