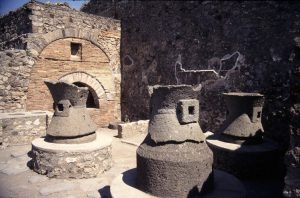 A view of the millstones and oven of a bakery (Pistrinium) in the Roman town of Pompeii which was buried in volcanic ash following the eruption of Vesuvius in 79 CE. The millstones have square sockets in which wooden beams would have been placed and harnessed to mules in order to turn the stones and so grind the grain for flour. Grain was poured into the top of the funnel shaped top stone which rotated around the fixed lower stone. The flour was collected at the base on lead sheets. The arched brick oven had a capacity for 80 loaves of bread. / Photo by Penn State Libraries Collection, Flickr, Creative Commons

The ancient Mediterranean diet revolved around four staples, which, even today, continue to dominate restaurant menus and kitchen tables.

The ancient Mediterranean diet revolved around four staples, which, even today, continue to dominate restaurant menus and kitchen tables: cereals, vegetables, olive oil and wine. Seafood, cheese, eggs, meat and many types of fruit were also available to those who could afford it. The Romans were also adept at processing and conserving their food using techniques from pickling to storage in honey. Flavouring food with sauces, herbs and exotic spices was another important element of Roman food preparation. Our knowledge of just what the Romans ate and how has been gathered from texts, wall-paintings and mosaics, and even the remains of the food itself from sites such as Pompeii.

Cereals made up the bulk of most people’s diet with wheat and barley being the most common and used especially to make bread and porridge. Bread was generally coarse and dark in colour, the better quality loaves being less dark and finer in texture. Innovations in grinding mills and finer sieves helped improve the fineness of flour over time but it remained much coarser than modern standards. Besides wheat and barley, oats, rye, and millets were also available. 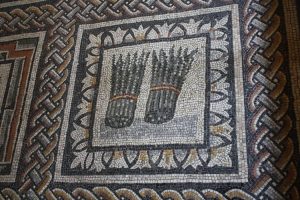 A Roman floor mosaic dating to between 350 and 375 CE and depicting asparagus. Food was a popular subject in mosaics throughout the Roman period. Provenance: Toragnola, Rome. (Vatican Museums, Rome). / Photo by Mark Cartwright, Creative Commons

The most commonly available fruits were apples, figs and grapes (fresh and as raisins and unfermented juice known as defrutum) but there were also pears, plums, dates, cherries, and peaches. Several of these could also be dried to increase their shelf-life. Vegetables were typically, but not exclusively, legumes and included beans, lentils, and peas. As an excellent source of protein, they were often mixed into bread. Other vegetables included asparagus, mushrooms, onions, turnip, radishes, cabbage, lettuce, leek, celery, cucumbers, artichokes and garlic. Romans also ate wild plants when available. Olives and olive oil were, of course, as today, a staple food and an important source of fats. Both fruit and vegetables could also be pickled in either brine or vinegar or preserved in wine, grape juice, or honey, again to conserve them for out-of-season consumption. 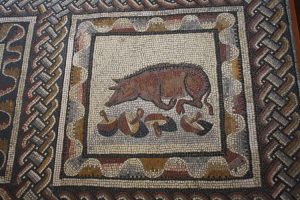 A Roman floor mosaic dating to between 350 and 375 CE and depicting a wild boar and mushrooms. Food was a popular subject in mosaics throughout the Roman period. Provenance: Toragnola, Rome. (Vatican Museums, Rome). / Photo by Mark Cartwright, Creative Commons

Meat could be an expensive commodity for most Romans and so was commonly prepared as small cuts or sausages. Poultry and wild game were important sources of meat, but pork, veal, mutton, and goat were also available. Game such as rabbit, hare, boar, and deer could also be farmed in large enclosed areas of forest. An astonishing variety of birds such as partridges, pheasants, geese, ducks, blackbirds, doves, magpies, plovers, woodcocks, and quails were also valued for their meat (caught wild or farmed), and just about any sizeable exotic bird, from flamingo to peacock, ostrich to parrot could find itself in the cooking pot of an aristocrat’s chef, eager to impress his master’s honoured dinner guests. Meat could also be conserved by salting, drying, smoking, curing, pickling, and preservation in honey.

Fish, most of which are still found in the Mediterranean today, could be eaten fresh, dried, salted, smoked or pickled. As supply was irregular, the preservation of fish ensured a useful protein addition to the Roman diet. Fish and shellfish were also farmed in artificial salt and fresh-water ponds. Fish sauce (garum) made from matured whole small fish or the interior of larger fish was an extremely popular method of flavouring. Crayfish and crabs were also eaten and shellfish available included mussels, clams, scallops, and oysters.

As the city of Rome grew, the demand for a regular food supply increased. Private enterprises largely met the needs of the citizens and foodstuffs mostly came from the Italian mainland and the larger islands such as Sicily and Sardinia. In the Republic, magistrates did strive to win public favour by securing foodstuffs from subject provinces and allied states. Gracchus took the popular step of establishing a monthly quota (frumentatio) of grain set at a reasonable fixed price for citizens. Augustus appointed a praefectus annonae whose job was to specifically oversee the regular supply of foodstuffs, especially grain. Grain was controlled by the state, as it was a form of tax in Italy and Africa. From the 2nd century CE, olive oil was also given out to the people; in the 3rd century pork and wine were given out, too, as part of the frumentatio for poorer citizens. In the later empire, as the state apparatus weakened, richer private individuals and the Church took over some of the responsibilities of maintaining a regular food supply. 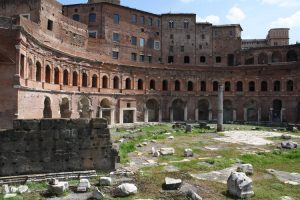 Trajan’s Market in Rome, 107-110 CE. The complex was originally on three street levels and only a part was devoted to commercial purposes. The upper level included a covered shopping arcade whilst the lowest level alcoves set in the semicircular front were also used as shops. / Photo by Mark Cartwright, Creative Commons

Citizens, if they did not grow their own supplies, bought their food at a private market (macellum). These were held in the public forums of Roman towns, either in the open air or in dedicated market halls. In Rome the food market was daily from the 2nd century BCE, one of the most famous and biggest locations being Trajan’s Market, a sort of ancient shopping mall. In provincial towns, a weekly market was the norm. Private estates in the countryside could also hold their own markets, directly selling their produce to the surrounding populace.

Roman towns had inns (cauponae) and taverns (popinae) where patrons could buy prepared meals and enjoy a drink of cheap wine (beer was only consumed in the northern provinces of the empire), but they seldom had a good reputation, thanks to their association with a lack of cleanliness and prostitution, and so they were generally avoided by the more well-to-do citizens. Bakeries could provide the sufficiently hot ovens needed for bread-making, where often customers brought their own bread dough and used only the bakery’s oven to bake it. Aside from these establishments, though, cooking was still very much a household activity. Using a brazier, food was roasted, broiled, and boiled. The art of good cooking was particularly associated with mixing condiments well to create tasty and unique sauces using wine, oils, vinegar, herbs, spices, and meat or fish juices. There were even writers who offered helpful cooking advice, such as Apicius who wrote On the Art of Cookery, a collection of 4th century CE recipes. 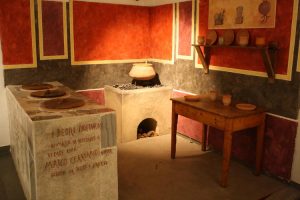 Spices (species – meaning any valuable exotic commodity), in particular, offered an infinite variety of taste combinations and no fewer than 142 different types have been identified in ancient sources. They often came from Asia, and the possibilities only increased from the 1st century CE when direct sea routes were opened up to Egypt and India. These exotic spices included ginger, cloves, nutmeg, turmeric, cardamom, cassia, mace, cinnamon, and, most popular of all, pepper. Tasty additives produced closer to home included basil, rosemary, sage, chive, bay, dill, fennel, thyme, and mustard.

In the early Republic the main meal of the day was at lunchtime and called cena, with a lighter meal being eaten in the evening (vesperna). Over time, cena slowly moved later and later in the day until it eventually became the evening meal. The lunchtime meal then became known as prandium. A typical lunch was light, consisting of fish or eggs with vegetables. To start the day, breakfast or ientaculum, was also light, sometimes merely bread and salt but occasionally with fruit and cheese. 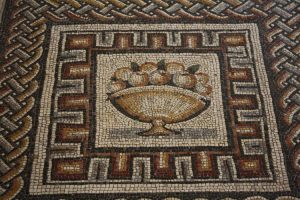 A Roman floor mosaic dating to between 350 and 375 CE and depicting fruit. Food was a popular subject in mosaics throughout the Roman period. Provenance: Toragnola, Rome. (Vatican Museums, Rome). / Photo by Mark Cartwright, Creative Commons

Saving themselves up for cena, then, the Romans, or at least those who could afford to, made it a big meal, typically with three parts. First came gustatio with eggs, shellfish, dormice, and olives, all washed down with a cup of wine which was diluted with water and sweetened with honey (mulsum). Following these starters, cena moved into top gear with a series of courses (fecula), sometimes up to seven, and including the star dish, the caput cenae. Meat or fish were the obvious main dish; sometimes even a whole roast pig was prepared. Naturally, richer households would try to wow their guests with exotic dishes such as ostriches and peacocks. The final stage was dessert (mensae secundae) which could include nuts, fruit, or even snails and more shellfish.

Just who exactly ate what and when in Roman times continues to be a fertile area of scholarship, but the archaeological record provides ample evidence of the variety of foodstuffs available to at least some of the Roman populace. We can also see that the Romans were skilled at ensuring a continuous supply of those foodstuffs through diverse agricultural practices, artificial farming techniques, and food preservation methods. Indeed, their relative success is indicated by the fact that such a scale of food production would not be seen again in Europe until the 18th century CE.