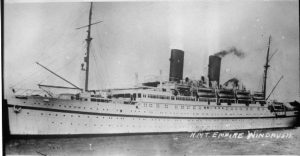 Looking at some of the forgotten voyages that brought men, women and children from all over the Caribbean to Britain. 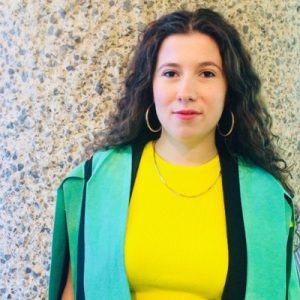 ‘The S.S. Empire Windrush docked at Tilbury on 22 June 1948 with 492 Jamaican men on-board’ is a sentence that has been written and said, in some form, countless times. It exemplifies how the repetition of words can enshrine believed truths. Not only is this statement factually incorrect, it reduces a complex and historical phenomenon into a neat moment. Windrush was not neat, it was not just Jamaican, not just male, and crucially not just the boat that docked at Tilbury on 22 June 1948.

The post will flag up some of the forgotten voyages that brought men, women and children from all over the Caribbean to Britain. Some of these journeys are referred to in ‘The Arrivals’ section of the Windrush: Songs in a Strange Land  exhibition and can also be found in the library’s vast newspaper collection. 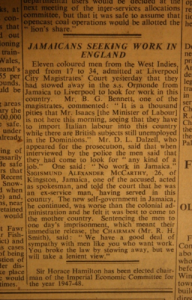 In April 1947, the S.S. Ormonde arrived in Liverpool. This article gave a sympathetic-paternalistic response to the 11 stowaways who came to Britain in search of work. In the context of severe financial problems in Jamaica, Sigismund Alexander McCarthy, an ex-service man from Kingston, described the need to come to the ‘Mother Country’. In the court hearing, the Chairman declared, “We have a good deal of sympathy with men like you who want work.” In many ways this set the tone for a partial acceptance of Caribbean people as temporary workers rather than citizens. 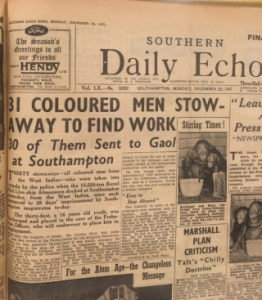 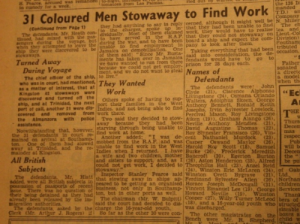 Later that year, the Almanzora docked at Southampton on 21 December 1947. It brought 200 West Indian passengers, including 31 stowaways – many of whom were ex-RAF. Unlike Empire Windrush, this arrival caused a local rather than national stir. There was no national press sent to ‘welcome’ the arrivals.

The British Nationality Act was passed in 1948 which explains why the majority of voyages arrived after Empire Windrush. The act conferred the status of British citizen on all Commonwealth subjects, recognising their right to work and settle in the UK. The Georgic, which arrived in Liverpool on 25 June 1949, had the ‘biggest number of coloured colonial immigrants to arrive on one ship since the Empire Windrush’. The party of 254 included 61 women, 26 men who had already been to England, ‘mostly in the R.A.F’ and 30 Trinidadians. Hence, this article depicted a diverse group of passengers, challenging the perception of voyagers as being single Jamaican men on their first journey to England.

In 1954, the Reina del Pacifico docked at Liverpool, bringing ‘More than three hundred Jamaican immigrants, men seeking work, or women coming to join husbands already established here’.[1] As waves of Caribbean migration continued, the number of women and children arriving overtook that of their male counterparts. A full-page spread in The Times, ‘West Indians Send for Their Families,’ illustrated this gender and age shift. By 1958, women and children ‘accounted for well over half of the 16,511 arrivals.’[2] The article mentions the 2,500 Barbadians (mostly women) who joined the British Hotels and Restaurants Association as part of the 1955 Barbadian Government sponsored training scheme, alongside describing the other important jobs that Caribbean people were doing – nursing, teaching and working on London’s transport system. By reporting work, housing and family life, the article presented an increasingly settled community, rather than a tale of migrants who were here to work temporarily.

In the months preceding the implementation of the Commonwealth Immigrants Act of 1962 – a racialised law that would greatly restrict the rights of certain Commonwealth citizens – there was a migration surge. In the British Pathé newsreel from 1962, ‘Immigrants Beat Clock’

, lots of smartly dressed children are shown disembarking at Southampton, just hours before the act came into force. The narrator tells of how ‘in the last week, in addition to those coming by sea, 2000 flew in’. Perhaps some of these children are those that have faced profound citizenship-insecurity in recent years, as part of the Home Office’s ‘hostile environment’ policy.

The so-called Windrush Generation was made of up a myriad of forgotten voyages which came via multiple routes – sea, air, mostly paid for and sometimes stowaways – and for different reasons – work, love and journeys of return.