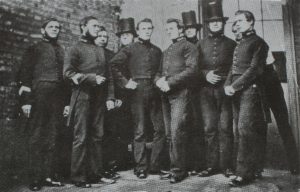 Images from the past are never to be taken at face value since, made according to contemporary visual conventions and artistic tastes, they reflect not objective reality but contemporary opinions about reality. Pictures of Victorian policemen contain varied, conflicting and interacting strands of meaning.  This post tries to show that popular visual sources — paintings, cartoons from Punch and prints from The Graphic — tell us a great deal about the mid-century attitudes of the middle and upper classes towards the police.[1] Middle-class artists, working in London, produced pictures for magazines affordable only by those classes, and art which was exhibited in galleries where working-class visitors — “the masses”— were outnumbered by those from the “classes.”[2]

“Middle and upper classes” covers a range of people and views, so opinions and artistic tastes were always diverse and changeable.[3] The clearest change in portrayals of policemen moves from initial suspicion, when they are shown as inefficient and violent, to their more frequent depiction as efficient, sometimes benevolent guardians against crime and disorder. One consistent feature, however, is the use of working-class facial stereotypes, though of different kinds, for policemen.

The 19th-century Police as Visually Working- or Lower-middle- class

Although there are jokes about policemen mistakenly or stupidly accusing middle or upper class citizens of misdemeanours, they are rarely depicted dealing with genuine wrongdoers from these classes, unless the crime is financial. The “classes” associated crime with the working “masses”: this was problematic because, below the highest ranks, the police themselves were recruited from within those “masses” — predominantly from rural workers and the lower middle class groups commonly shown as the butt of jokes.[4] Victorian artists, who used physiognomy to indicate character and class, often gave policemen the coarse features, “chunky” noses and heavy jaws which show lower social origins — especially earlier in the century when the “new” police were not trusted and earlier traditions of caricature remained strong.[5] This convention persisted as a means of showing disapproval of particular police actions, but an alternative was developed from the late 1840s: “good” lower class types were given rustic versions of the “Anglo-Saxon” features found in the middle classes.[6]

Significantly, William Powell Frith in his painting The Railway Station (1862) chose real detectives, Brett and Haydon, to epitomize this lower class ideal.[7] Already successful in detecting real financial crimes, they were depicted arresting an embezzler.[8] Critics of police recruitment policy thought detectives too ill-educated to detect such “intellectual” crime; Tom Taylor’s pamphlet, written for the painting’s exhibition, described these “real men” as “superior to others of their class” — this superiority explains their exceptional success.[9] Their inclusion, however, suggests that detectives came to be regarded as a necessary part of the London scene. 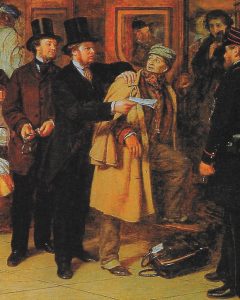 The parallel uniformed type evolved in prints and paintings into an imposingly tall, broad figure, with a rural “Anglo-Saxon” face. Although reflecting the physical standards required for policemen, it is an idealization of controlled masculinity, indicating effective or benevolent power, or support and sympathy for the police.[10] Frank Holl’s lost painting, Deserted, shows this type. A reproduction was preserved in The Art Journal, May 1876.[11] This shows a tall, broad shouldered police officer rescuing a foundling. The Times described him as “… its big bearer, who looks at the forlorn slumberer with the eye of a man who has babies of his own.”[12] 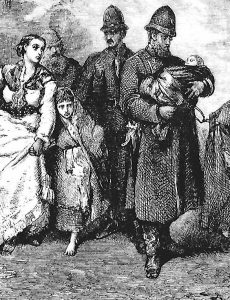 Detail of a reproduction from The Art Journal, May 1876, of Holl’s “Deserted.”

Of course artists and cartoonists expressed approval or disapproval visually; the significance lies in their continuing use of working class faces for the latter — a reflection of ongoing concerns expressed about the quality of police recruits.[13]

The duties of the police were to prevent crime and preserve public order.[14] This had to be handled carefully by artists: magazine illustrations for a middle/upper-class family audience could not be too unpleasant while paintings were expected to contain “beauty” in some form. Artists thus used iconic figures to suggest rather than alarm — the pickpocket to signify street crime, and itinerant traders to represent street life.[15]

Paintings of the 1860s onward contrast with earlier ones by suggesting that the police actually caught criminals. In Parry’s very early Street Scene (1835), a policeman fails to notice a pickpocket lifting his elegant handkerchief, even though he is under a street lamp – lighting was widely thought to deter crime – and talking to an army officer, another figure associated with public order.[16]

In Frith’s hugely popular “Derby Day” (1858), a child pickpocket operates unseen right next to one policeman, while another, harassed, admits he cannot interfere with the thimble riggers.[17] The composition of later pictures, however, emphasizes policemen catching criminals unawares – a narrative thrill with a safe resolution.In Hicks’s The General Post Office – One Minute to Six (1860), another child pickpocket is caught red-handed; although the incident happens on the edge of the picture, its vanishing point is on the constable’s hat –the eye is led towards him. 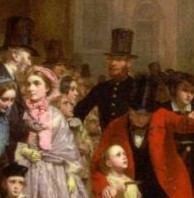 Detail from The General Post Office – One Minute to Six, by George Elgar Hicks, 1860. © The London Museum.

The composition of Frith’s Railway Station (1862) uses the movement of the crowd and perspective of the railway platform to lead the viewer’s eye toward the detectives. Similarly, in Holman Hunt’s London Bridge (1863), the bridge’s diagonal leads the eye to a pickpocket who, clutching a stolen watch, climbs perilously along the bridge towards his accomplice. Unknown to him, a policeman already has his hand on the latter’s shoulder.[18]

Such paintings highlight the fears of the “classes” of mixing in a crowd with the “masses”. Painters responded by portraying incidents such as attempted theft, but included policemen to reassure their clientele.[19] 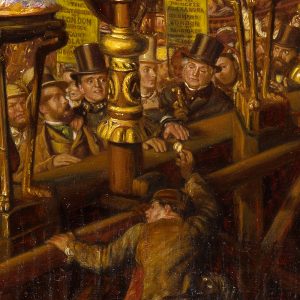 Detail from London Bridge on the Night of the Marriage of the Prince and Princess of Wales, by William Holman Hunt (1864/66). © Ashmolean Museum, University of Oxford.

Magazines were selective in what they portrayed. Graphic’s scenes of working class life — markets, streets, even a Republican march — rarely include policemen, though the accompanying text may do so. One policeman on his beat in the snow is shown, but, reassuringly for readers, in an upper class area.[20] The Graphic has, however, before 1880 three illustrations of police with captured criminals: The British Rough (1875) is seized firmly by the neck; in Night Charges (1869) police are escorting a troop of petty offenders to court; in The Bashful Model (1873), deliberately comic, policemen hold down a criminal struggling to avoid having his “mugshot” photographed. In each case the letterpress is designed to reassure: the night charges are, we are told, minor offenders with whom the police deal good-humouredly; the British rough is described (unconvincingly) as a resigned petty offender, rather than the man wanted for £100 in the poster on the wall behind.[21] The overall implication before the 1880s is that disorder is rare and the police can control it when it occurs.

Punch’s approach is more nuanced. It usually portrays malefactors under arrest or about to be arrested. But it does register concerns, notably that policemen can’t be found when needed. The visual cliché associated with this from Punch’s first edition onward shows police spending too much time socialising with cooks and kitchen maids.[22] Furthermore, Punch’s political cartoons did sometimes portray the police in difficulties with criminals to argue that police numbers were insufficient and pay not commensurate with the combination of physical and mental abilities policemen required.[23]

There are broad trends among Punch’s numerous cartoons of policing the street. Early vignettes unflatteringly portray constables who confront drunks and crowds during processions and events such as the Derby, often with force. There are textual references to bribes. From the 1850s, depictions of use of force decline, and although constables make arrests, deal with tourists, traffic, clowns and Londoners of various ages and classes, the icon of street disorder becomes the urchin, playing jokes on constables.[24] Increasingly, the policeman is drawn as one element in the street scene —“furnishing the respectable street”.[25] The fate of one visual cliché, the policeman and the orange woman, encapsulates such changes; the latter typified street life because of their numbers and ubiquity.[26]

The police were charged with “moving on” those lingering in the street to prevent disorder; in practice this focused on the poor, something which Dickens, for example, criticised in Bleak House, and Mayhew condemned as police harshness in 1851.[27] Thus cartoonists such as Leech and Doyle from the 1840s and one painter, Ford Madox Brown, showed policemen “moving on” orange sellers — usually young girls or elderly women — with violence.[28] This visual cliché became less common as the century progressed; does this mean that police treated street traders less harshly — or that certain streets were more orderly — or that police violence was no longer thought funny? The motif re-appears in two much later paintings by William Logsdail. In The Ninth of November (1888), surrounded by icons of street life — black-face minstrel, shoe-black, urchin scrumping an orange, and an orange woman — one policeman holds them all back, but with no violence. The police presence secures order. In the image St. Martin’s-in-the-Fields (1888), the police, mounted and on foot, peacefully share a public space with an orange woman’s stall and other traders. There is no overt sign of the violent clashes between police and strikers which took place there in 1886-7.[29] But, directly under the coat of arms signifying civic power, police are central to the composition, and in a wide space which draws the eye.

Victorian artists created pictures which reflected changes in middle- and upper-class opinions of the police: constables “became” more efficient in arresting criminals, more benevolent in dealing with the poor, less violent in their approach. Their visual stereotype moved towards a tall, overtly masculine figure, the “friendly giant” — whose presence and size in the public place or respectable street promised order.[30] Many images actually indicate middle class fears that there is too little “surveillance,” so others include strategies to allay anxiety: in narrative paintings the inclusion of a policeman; the conventional interpretations accorded by Graphic’s letterpress to its images; selected content sentimentalizing or laughing at working people, and suggesting that, anyway, the police are in effective control.

Punch’s choice of figures in police uniform both to support and criticise government policies shows recognition, though not unquestioning, of their role as state and civic officials. Graphic rarely criticised the police, while more radical magazines, such as the Illustrated Times, did so; Punch and Graphic, however, probably thrived commercially because they showed what was, overall, acceptable to their audiences. Such images undoubtedly formed opinion as much as they reflected it.[31]

While visual sources suggest the gradual growth of middle- and upper-class confidence in the work and conduct of the police, the continued occasional use of conventional “rough” working-class physiognomy shows that underlying anxieties persisted, periodically reinvigorated by events such as the Turf Fraud Scandal (1877). But these elite sources presented through their visual conventions only partial impressions of police work and suggest their readers had limited perceptions of its realities. What they reveal is a mixture of hopes, fears and beliefs swirling around the “blue lobster” as he became the “friendly giant.” 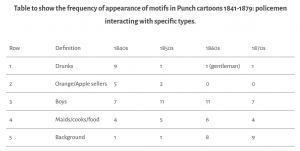