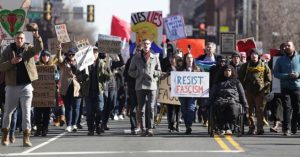 Protesters march down Market Street in Philadelphia to speak out against Vice President Mike Pence, who made a noon speech in Philadelphia on Saturday, Feb. 4, 2017. Similar anti-Trump demonstrations are taking place this weekend in cities and communities around the country and the globe. (Photo: Margo Reed / Philadelphia Inquirer)

From New York City to Trump’s “Winter White House” at Mar-A-Lago in Florida, the opposition refused to remain silent for the third weekend in a row.

For the third weekend in a row, people in the United States and around the world were registering their disgust and opposition to President Donald Trump by staging rallies and protests against the new administration’s far-right agenda.

Though the Department of Homeland Security and the State Department were forced by court injunction to halt their enforcement of a controversial immigration order issued by Trump last Friday, many of the scheduled protest this weekend came together in opposition to Trump’s attack on vulnerable communities, his assault on the constitution, his unfettered economic attack on working people and the poor, and cabinet choices that include titans of Wall Street and the fossil fuel industry.

A large  demonstration sponsored by the LGBTQ community and its allies in New York City kicked off Saturday afternoon near the famous Stonewall Inn, with tens of thousands expected to attend, as other anti-Trump protests were underway or scheduled in Washington, D.C., Philadelphia, London, Los Angeles, Chicago, and numerous other cities and towns.

“Join us in front of the Stonewall Inn as we stand in solidarity with every immigrant, asylum seeker, refugee and every person impacted by Donald Trump’s illegal, immoral, unconstitutional and un-American executive orders,” the organizers in New York stated. “We will also speak out against Trump’s selection of the most anti-LGBT nominees and appointees in modern history.”

While Vice President Mike Pence was met with large crowds in Philadelphia, where he delivered remarks at a mid-day event, a protest is also scheduled to take place Saturday evening outside Trump’s Mar-a-Lago estate in Palm Beach, Florida, where the president is spending the weekend.

In West Palm Beach, Florida on Saturday evening, protesters were gathering to march on Trump’s estate at Mar-a-Lago:

Across the country, #StandIndivisible groups—inspired by the Indivisible Guide—were holding rallies and organizing meetings to counter Trump and his Republican allies in Congress:

A snapshot of some of the other protests taking place this weekend:

#ResistTrump protests & actions are taking place all over the country this weekend. Here is our list — please RT & spread the word!! pic.twitter.com/oAOQF935Jo

A few hundred protesters with signs gathered in freezing temperatures under sunny skies Saturday morning at 6th and Market Streets, in Center City Philadelphia, a block away from where Vice President Pence make a noon speech to the Federalist Society at Congress Hall, on Chestnut Street.

“No Pence! No fear! Philly doesn’t want you here!” they chanted.

“No Pence! No fear! Philly doesn’t want you here!” pic.twitter.com/ExN9Ua7Baq