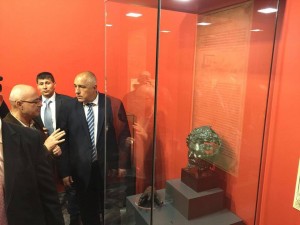 The fully renovated Archaeological Preserve of the Ancient Roman city of Deultum located near the town of Debelt, Sredets Municipality, Burgas District, in Southeast Bulgaria, has been formally inaugurated.

Deultum is especially interesting because it was a Roman colony, which according to Roman law signified a status equal to that of Rome itself. In today’s Bulgaria, there are only three Roman cities which enjoyed this status – Deultum (Colonia Flavia Pacis Deultensium) near Burgas, Ratiaria (Colonia Ulpia Traiana Ratiaria) near Archar, Ulpia Oescus near Gigen.

The Ancient Roman city of Deultum (Colonia Flavia Pacis Deultensium) was built in the 1st century AD near a previously existing Ancient Thracian settlement called Debelt or Develt. It was settled by Roman military veterans from the Augustus’ Eight Legion (Legio VIII Augusta) near the Mandra Lake (today the Mandra Water Reservoir) where it also had a port connecting it to the Black Sea.

Deultum was first declared an archaeological preserve (Deultum – Debelt) in 1988; however, until now it lacked a number of adequate facilities leading local officials to declare that the Preserve has now been formally opened after a delay of nearly 30 years.

The all-out renovation of the Deultum Archaeological Preserve has been carried out by the Sredets Municipality and the National Institute and Museum of Archaeology under a project funded with BGN 2.8 million (app. EUR 1.4 million) in EU funding under Operational Program “Regional Development”, with Sredets Municipality providing BGN 490,000 in co-funding. The project is entitled “Deultum – Door to the Mysterious Strandzha Mountain”.

Borisov’s official Facebook Page has released an entire photo album from the opening. This has been the second opening of an archaeological tourism site for him in the past couple of days, after the opening of the new Early Christian Archaeological Park in the southwestern town of Sandanski. 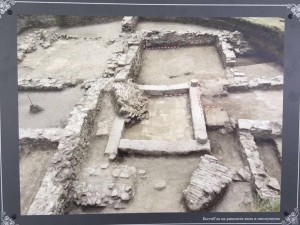 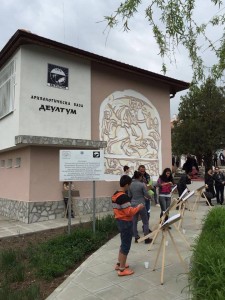 One of the most interesting artifacts on display is the bronze head of Roman Emperor Septimius Severus (r. 193-211 AD), which was discovered during the excavations of Deultum back in 1987 by the team of Assoc. Prof. Petar Balabanov. The head from a full-size bronze sculpture was restored only in 2010-2011 with funding from the American Research Center in Sofia and the America for Bulgaria Foundation. Archaeologists have proven that the bronze statue of Septimius Severus, of which the head was part, was made by local artists in Deultum, with bronze from nearby deposits.

The Preserve also features the ruins of Antiquity thermae (public baths), a temple of god Asclepius later turned into a temple of the imperial cult as well as parts of Ancient Bulgar rampart walls from the First Bulgarian Empire (632/680-1018) dating back to the early 9th century, to the reigns of Khan Krum (r. 803-814 AD) and Khan Omurtag (r. 814-831 AD).

Ruins of the Deultum fortress itself, which connected the Black Sea Bay of Burgas with the Strandzha Mountain in the hinterland, can also be seen. This route was used by the Ancient Thracians inhabiting the region in order to export their goods by sea. 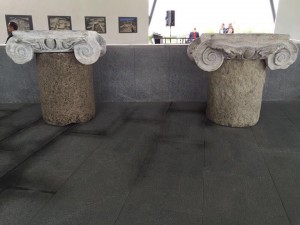 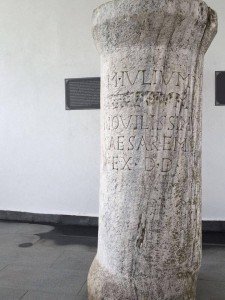 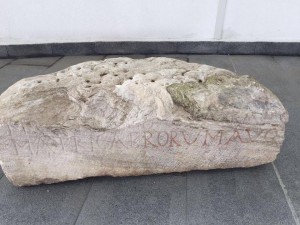 As part of the renovation project, the Preserve now has a workshop where visitors can participate in the basic processing of ceramic fragments discovered during the archaeological excavations of the Ancient Roman colony.

The new museum of Deultum also features a restoration hall, a virtual hall, a library and a reading room, teaching facilities, and an exhibition room dedicated to the local biodiversity since the region is part of the bird migration route along the Black Sea coast known today as Via Pontica; it was named after the Ancient Roman road going along the Western Black Sea coast, i.e. along the coast of today’s Bulgaria.

The renovation project has also provided for the training of tour guides to welcome the future visitors of the Deultum Archaeological Preserve. According to the estimates of Bulgaria’s Regional Development Ministry, the renovated Preserve with its new museum should bring about 25,000 more tourists to Deultum annually.

The archaeological excavations of the Roman colony of Deultum are set to continue. During the 2015 digs, the team of Assoc Prof. Lyudmil Vagalinski, Director of Bulgaria’s National Institute and Museum of Archaeology, unearthed there a well preserved and unusual fortress tower from the Late Roman / Early Byzantine period on its northern fortress wall, a very complex facility which is similar to fortress towers in some areas of North Africa which were part of the Eastern Roman Empire known today as Byzantium in the 5th-6th century AD.

The tower was built in the second half of the 5th century AD, and protected the city for about 100 years. It was destroyed at the end of the 6th century during the attacks of Slavs and Avars.

The fortress wall of Deultum reaches the nearby Sredetska River which provided a connection to the Black Sea via the Mandra Lake (today the Mandra Water Reservoir); the fortress wall was put up in the 5th century AD, and while it protected the city’s major public buildings, any building left outside of the wall were torn down in order to prevent any hostile forces from using them as cover. 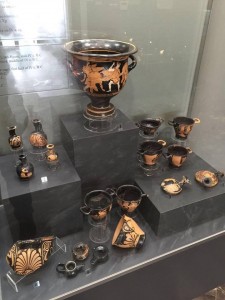 Vessels and other artifacts found in Deultum as displayed in its brand new museum. Photos: Bulgarian Prime Minister’s Facebook Page 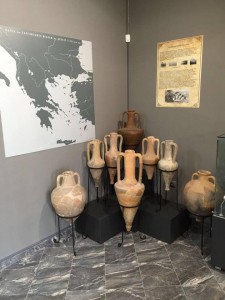 The ruins of the Ancient Thracian settlement of Debelt (Develt) and the Ancient Roman city of Deultum (Colonia Flavia Pacis Deultensium), which was also a medieval Byzantine and Bulgarian fortress, are located near today’s town of Debelt, Sredets Municipality, Burgas District (17 km east of the city of Burgas), near the Black Sea coast of Southeast Bulgaria. The Roman city of Deultum itself was founded during the reign of Roman Emperor Vespasian (r. 69-79 AD) on the northern bank of the Sredetska River, near the Mandra Lake (today the Mandra Water Reservoir) where it also had a port connecting it to the Black Sea. Deultum was a Roman colony, which according to Roman law signified a status equal to that of Rome itself. In today’s Bulgaria, there are only three Roman cities which enjoyed this status – Deultum (Colonia Flavia Pacis Deultensium) near Burgas, Ratiaria (Colonia Ulpia Traiana Ratiaria) near Archar, Ulpia Oescus near Gigen. Deultum was settled by Roman military veterans from the Augustus’ Eight Legion (Legio VIII Augusta). On the 30th anniversary since the founding of the Roman colony Deultum, then Roman Emperor Trajan (r. 98-117 AD) minted a special emission of bronze coins. There are indications that at some point between the 130s and the 150s Deultum was seriously damaged by a barbarian invasion. The Roman city was further strengthened during the reign of Emperor Marcus Aurelius (r. 161-180 AD); its limits were marked by inscriptions at two points – in today’s southern suburbs of Burgas, and at the ancient fortress in the town of Golyamo Bukovo.

Deultum thrived during the reign of the Severan Dynasty (r. 193-235 AD), at the end of the 2nd and the beginning of the 3rd century AD, when it had an area of about 250 decares (app. 62 acres), and a sophisticated urban infrastructure. Its residents had temples of ancient god of medicine Asclepius and goddess Cybele, and also worshiped the Thracian Horseman, also known as god Heros, and Hercules (Heracles). In the second half of the 3rd century AD, Deultum was ransacked by the Goths; however, it was restored shortly after that. The city’s thermae (public baths) were re-built with a complex water supply and sewerage system, and a hypocaust (underfloor heating). It is possible that during a visit to Deultum in November 296 AD Roman Emperor Diocletian also visited the thermae. In the 4th century, the city was known again with its Thracian name, Develt, and it was reinforced because of its new strategic role of supplying and protecting the new capital of the Roman Empire, Constantinople (as of 330 AD). In the 370s, there was a major battle near Develt between the Roman forces and the Goths who prevailed and burned down the city. It was restored once again but on a smaller area. In the 5th century, Develt was the center of a bishopric.

In the second half of the 6th century, the city was affected by the barbarian invasions of the Slavs and Avars. Debelt (Develt) was conquered from Byzantium for the First Bulgarian Empire (632/680-1018 AD) by the Bulgarian Khan (or Kanas) Krum (r. 803-814 AD) in 812 AD who exiled the city’s population in the Bulgarian territories north of the Danube, and settled it with Bulgarians. Thus, during the Middle Ages, Debelt was a major strategic fortress in the frontier region between Bulgaria and Byzantium. Debelt is also the starting area of the Erkesiya, a huge earthen wall (rampart) with a moat built by the Ancient Bulgars in the 8th century, as early as the reign of Khan Tervel (700-721 AD), after in 705 AD the Byzantine Empire ceded to Bulgaria the Zagore Region, which covers much of today’s Southeast Bulgaria. The Erkesiya Wall spanned 142 km going all the way from the lakes around the city of Burgas in the east to the Sakar Mountain in the west. The Erkesiya Wall was made the official border between the First Bulgarian Empire and Byzantium in a peace treaty signed in 815 AD by the Bulgarian Khan Omurtag (r. 814-831 AD) and the Byzantine Emperor Leo V the Armenian (r. 813-820 AD), and, in addition to serving a defense purpose for Bulgaria, it became a major customs facility facilitating the trade relations between the two empires all the way to the 14th century. By the end of the 14th century AD, Debelt waned, when the Ottoman Turks conquered the Second Bulgarian Empire, and the name of the city was no longer mentioned in historical sources after that period.

The Ancient Thracian, Roman, Byzantine, and Bulgarian archaeological city of Debelt (Develt) / Deultum was first explored and described at the end of the 19th century by Czech-Bulgarian historian Konstantin Jirecek and Czech-Bulgarian archaeologists Karel and Hermann Skorpil. It was further explored in the first half the 20th century but major archaeological excavations near Debelt started in the 1980s because of the construction of a large metallurgical factory there. The excavations were led by late archaeologist Stefan Damyanov from the National Museum of History in Sofia, and Petar Balabanov from the Burgas Regional Museum of History. Later, the excavations were led by Tsonya Drazheva from the Burgas Museum, and then by Lyudmil Vagalinski from the National Institute and Museum of Archaeology in Sofia. Debelt – Deultum was declared an archaeological monument in 1965, and in 1988, the Bulgarian authorities set up the Debelt – Deultum Archaeological Preserve which covers an area of about 3 square km, and features over 25 archaeological sites dating back to different time periods – from the prehistory to the Late Middle Ages. Those include a medieval fortress called Malko Gradishte (“Small Fortress”) which existed between the 4th and the 7th century AD as an Early Byzantine fortification, and in the 12th-14th century AD, as a fortress in the Second Bulgarian Empire (1185-1396 AD); and a 9th century church in an area called Kostadin Cheshma where the archaeologists found a total of 34 Christian funerals, and a total of 64 lead seals (most of them belonging to Byzantine dignitaries from the Iconoclastic Period (726-843 AD)) including three seals of the Bulgarian Knyaz Boris I Michael (r. 852-889; 893 AD) with the images of Jesus Christ and the Mother of God (Virgin Mary). Since Knyaz Boris I was the ruler who made Christianity the official religion of Bulgaria, scholars have hypothesized that Debelt is where he might have been baptized by the Byzantine clergy.