Americans once abhorred the automobile. Today, there is a car in every garage.

At the turn of the 20th century, most Americans thought of the automobile as a loud, costly, unreliable alternative to a horse. The country lacked paved streets and gas stations, and cars were prone to breaking down or crashing. The automobile was a toy for rich men willing to flirt with danger. For most everyone else, it was a terrible nuisance.

States passed onerous laws to restrict car travel. Tennessee demanded drivers notify the authorities a week before taking a trip. Vermont required each car be ushered about by a person waving a red flag. In Pennsylvania, a group of farmers pushed for a law to protect horses from cars. “In case a horse is unwilling to pass an automobile on the road,” it read, “the driver of the car must take the machine apart as rapidly as possible and conceal the parts in the bushes.” 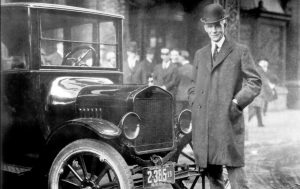 In 1900, there were just 8,000 cars on the road. Then came Henry Ford, mass production and the Model T. By 1910, Americans owned some 470,000 cars. By 1920, a staggering 9.2 million. Opposition faded, and the automobile became a staple of American life. Today, there is a car in every garage, a gas station on every block, and millions of miles of roads and highways stretching from coast to coast.

As Elon Musk, CEO of Tesla, accurately noted, “When Henry Ford made cheap, reliable cars, people said, ‘Nah, what’s wrong with a horse?’ That was a huge bet he made, and it worked.”

Unlike the automobile, clean energy is still in its adolescence, a period when falling costs and widespread adoption spur resistance from business leaders, policymakers and the public. But, in time, wind and solar will grow and mature, deliver more jobs, more tax revenue and smaller power bills. Like the automobile, they will become ubiquitous.

Change comes in fits and starts, meets resistance, and then happens all at once. As Henry Ford said, “We have only started with the development of our country — we have not as yet, with all our talk of wonderful progress, done more than scratch the surface.”