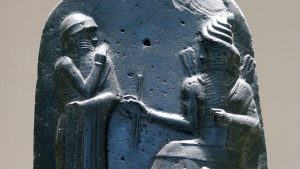 Hammurabi ruled through provincial governors but also allowed cities to make local decisions and collect taxes by councils of elders.

As indicated by Rim-Sin’s rule from Larsa in the south and the extensive territory controlled by Shamsi-Adad and his sons in the north, quite limited in size and power was the Babylon Hammurabi inherited from his father in 1848 BC. After being king for five years Hammurabi began to attack his neighbors, capturing Isin, moving down the Euphrates to Uruk, and expanding in other directions. When Shamsi-Adad died in 1837 he left his kingdom to his warrior son, Ishme-Dagan, who promised to protect his weaker brother, Iasmah-Adad; but the latter was almost immediately overthrown by a nationalist Mari dynasty led by Zimri-Lim, who ruled more firmly than Iasmah-Adad but continued his policies. Zimri-Lim and Hammurabi became closely allied, assisting each other with information and even soldiers. 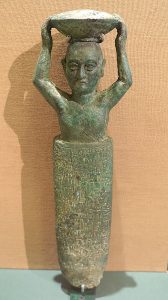 In 1820 BC Babylon was attacked by Elamites, Guti, Assyrians, and Eshnunna, but Hammurabi was victorious “through the great power of the gods,” and “encouraged by an oracle” the next year, he invaded and defeated Rim-Sin in Larsa. The year after that a new coalition of the same old enemies formed and was again defeated by Hammurabi’s forces. Apparently caught up in a warlike mode, the very next year Hammurabi attacked his ally Zimri-Lim and took control of Mari and parts of Assyria, making them his vassals. However, they must have revolted two years later, because Hammurabi returned then and destroyed the city of Mari; a few years later he overcame the Assyrian armies and defeated all his enemies in that country. In less than ten years Babylon had conquered almost all of Mesopotamia.

Hammurabi ruled through provincial governors but also allowed cities to make local decisions and collect taxes by councils of elders. Although Marduk was made the chief god, diverse religious traditions were tolerated, and many temples were rebuilt, even at Nippur. Hammurabi is best known for the code of laws he promulgated near the beginning of his reign and had carved in stone in temples shortly before he died. The noble purposes of these laws were

to cause justice to prevail in the country,
to destroy the wicked and the evil,
that the strong may not oppress the weak.[1]

The actual precedents of real cases, which made up the code, will show us more clearly what his concept of justice was. The code referred to three classes of people: awelu who were free, mushkenum or commoners who were dependent on the state, and wardu who were slaves. Crimes against awelu were more severely punished, but an awelu also was expected to be more responsible. The first law is that if an awelu accused an awelu of murder but did not prove it, the accuser was to be put to death. Similarly with a charge of sorcery, but in this case the proof was determined by throwing the accused into the river. If he survived this, the accuser was put to death; and the accused took over his estate. 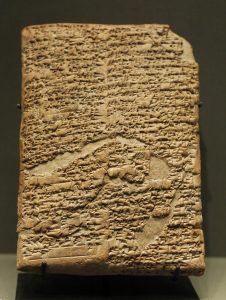 Those who steal property from the temple or the state were put to death as were those who received such property from the thief. In some cases the thief could pay thirtyfold restitution to the temple or state or tenfold to an individual; but if he did not have it, he was put to death. The penalty for having property without a witnessed contract or for cheating or lying about it was death.

Death was also the penalty for harboring a slave or helping one to escape. A soldier could be executed for hiring a substitute. A priestess could be burned for entering a wine shop. If an awelu could not pay an obligation and had to sell the services of his wife, daughter, son, or himself, three years were required before their freedom was reestablished. Adulterers were bound and thrown into the water; but if the husband spared the woman, the king might spare his subject. If an awelu committed incest with his widowed mother, both were burned. If an adopted son denied his foster father or foster mother, his tongue was cut out. If a son struck his father, his hand was cut off.

If an awelu destroyed the eye of a noble, his eye was to be destroyed; or if he broke an awelu’s bone, his bone was broken. Yet if it was the eye or bone of a commoner, the fine was one mina of silver, which equaled sixty shekels. If it was a slave’s, he must pay half his value. The same pattern holds for a tooth, except the fine was only one-third of a mina.

If an awelu struck a superior awelu, he was given sixty lashes in the assembly; but if they were of the same rank, he paid one mina. However, if a commoner struck a commoner, he paid only ten shekels. If a slave struck a noble, his ear was cut off. However, if an awelu injured another awelu in a brawl, he could swear it was not deliberate and pay only for the physician; even if the man died, he only had to pay a half mina or a third for a commoner. If an awelu struck an awelu’s daughter and caused a miscarriage, he paid ten shekels for her fetus; but if she died, his daughter was put to death. Yet if she was a commoner’s daughter, the fine for miscarriage was five shekels and for her death only one-half mina and even less for a slave.

If a physician while performing surgery caused an awelu’s death or loss of his eye, his hand was cut off. If a builder constructed a house that collapsed and killed the owner, that builder was put to death. If it caused the owner’s son to die, the builder’s son was put to death.

Such crude retaliations appear absurd to us today, and it is obviously unjust to punish the children for the crimes of their parents. This law code is more severe than previous Sumerian ones. Originally the laws were to settle quarrels and private conflicts by means of arbitration; now the king’s decisions had become law for everyone, instituting a system to resolve private conflicts by generally recognized and published standards. Yet the laws reflected the social and economic inequalities as well as the penchant for using retaliatory violence as a reaction to problems. 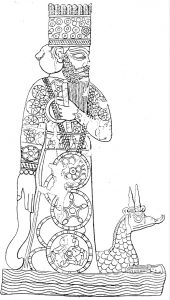 Marduk and his dragon Mušḫuššu, from a Babylonian cylinder seal. / Wikimedia Commons

With the exception of Marduk the Babylonians continued to worship the Sumerian gods, though with their Semitic names. Temples were still important and contained the usual lodgings, libraries, schools, offices, workshops, stores, cellars, and stables. Religious ceremonies were performed every day with musical instruments, hymns, prayers, and sacrifices. Priests had sons, who were taught in the schools. Clergy included chanters, exorcists, and dream interpreters. Priestesses could marry but were not allowed to bear children in the temple, where sacred prostitution continued.

Houses were still built in the Sumerian manner with enclosed courtyards and a family chapel for the statuettes of the household gods and a place for burials. Kings such as Zimri-Lim in Mari built large palaces surrounded by enormous walls. Interior walls were thick and tall and had no windows, but light came in through doors and openings in the ceiling. Numerous letters have been found by which kings communicated with their officials. Hammurabi intervened in Larsa to make legal judgments, appoint officials, summon them to his court, and order the digging of canals. Iasmah-Adad and Zimri-Lim after him both conducted a census among the nomads.

Hammurabi died about 1806 BC and was succeeded by his son, Samsu-iluna, who ruled until about 1768, but he had to handle numerous revolts. In the south Larsa rebelled for two years, and then Iluma-ilu claimed the independence of Sumer south of Nippur, fighting a bloody war against Babylon in which several cities including Ur were burned down. The northern Assyrians regained their independence under Adasi. Samsu-iluna was also attacked by Kassites, Amorites, Sutaeans, and Elamites. Although he fought them off, his empire was reduced to Akkad. The next four rulers of Babylon held on to this area as Kassites were moving in and settling.

Ammisaduqa, who ruled Babylon for twenty years from 1702 BC, left us an edict indicating he tried to reform economic conditions by decreeing justice for the land, ordering the cancellation of most debts and back taxes. Officials who had collected by constraint had to give refunds or die, as could creditors who sued for payment of a loan on a house, though merchants still had to keep commercial agreements. Governors who gave barley, silver, or wool for forced labor were to die, and the workers could keep what they had been given. Those who were in service because of debts they could not pay were released to freedom by the king’s edict. It is not known how these orders were carried out, but as with Urukagina the intent to correct past injustices is clear.