The first manuscript that I ever encountered face-to-face was Wellcome MS. 550. This volume, mainly in medieval Latin, dates from the early 15th century, and is a compendium of different medical and surgical writings. As my research involves the plague, I turned to the plague tract by John of Burgundy occupying folios 108 recto to 115 recto. This was a popular text in England, and explained how the plague was caused by corrupted air. John suggests that a dietary regimen is to be followed to prevent plague, and that phlebotomy may help those afflicted by it. In a time when the disease was not well understood, people turned to physicians for help, and these were two practical pieces of advice which could be easily followed, even if they may not have been effective against the plague.

While I was interested in this specific tract, I was also intrigued by the materiality and visual appearance of the manuscript as a whole. It is written on parchment. There were evidently some small holes in the skins used, and there are numerous examples of these holes with smaller holes either side, which would have been made for thread used to sew up the hole. Although none of the thread has survived, it is evident that care was taken to sew over the holes. 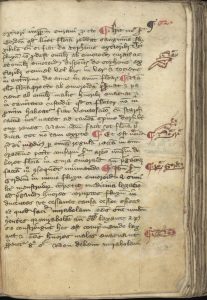 The manuscript is very tightly bound, meaning that it is difficult to open the volume enough to actually read what is in the inner margins of the pages. Only about an inch in width of the first folio survives, so that is especially difficult to examine. I was particularly drawn to the marginalia and illustrations in MS. 550. The marginalia include manicules: hands used to point to a specific line of text. A brilliant example is from folio 62 recto, where there are two manicules (see above). The top hand here has quite an elaborate cuff, and actually has six fingers! There’s no reference to a six-fingered hand in the text though, so it’s most likely just a mistake by the person who drew it.

But margins weren’t just a space for inserting symbols: they were often used as an additional area for writing – summing up parts of the main text, or even adding to and correcting parts of it. The writing in the margin shown below (folio 52 recto) is in a slightly different ink, so it was written after the main text. Someone clearly thought that this added text was important, as they also outlined it in blue. Most of the manuscript is written in black ink, with red ink to rubricate the text, so this use of blue ink is particularly special. 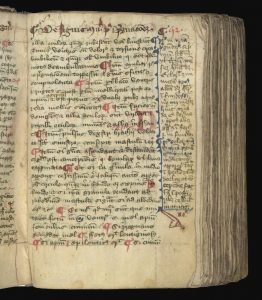 There’s a symbol resembling a modern-day hashtag in one margin (folio 48 verso), which is probably a more rudimentary form of a manicule, as it’s being used to draw attention to a particular part of the text. In MS. 550, I found only one hashtag, but in other manuscripts that I’ve worked with they have been used to mark a particular theme, so in this way they are used in much the same way as on Twitter. 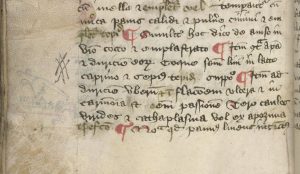 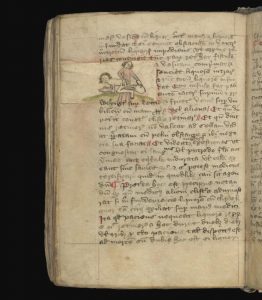 There is so much more to engaging with a manuscript than just reading the words on the page written by the original scribe or scribes. All of the extra features, such as marginal glossing and pointing hands, tell you about how the manuscript was used, and can indicate the interests of different readers over time. With the handwriting of different individuals in the margins, you can see a kind of conversation taking place, each reader adding something new as he or she read the text and assessed the previous reader’s additions. Something to think about the next time you scribble a note in a margin.

Author: Alex Lee is a PhD student in the Italian department at University College London, working on plague and popular religion in medieval Italy. She charts her research on her blog and she tweets as @AlexRALee.