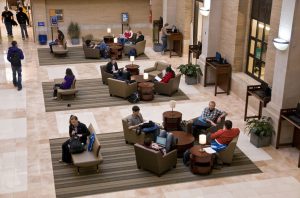 U.S. institutions of higher education and U.S. local governments are under extraordinary pressure to cut costs and eliminate from institutional or governmental ledgers any expenses whose absence would cause little or no pain.

In this political climate, academic and public libraries may be in danger. The existence of vast amounts of information – a lot of it free – on the Internet might suggest that the library has outlived its usefulness.

But has it? The numbers tell a very different story.

In spite of the findings of a survey in which Americans say they are using public libraries less, the usage numbers reported by libraries indicate the opposite. 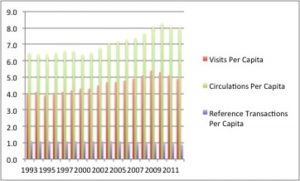 Here’s what data on circulation (books and other items checked out to library users) and annual visits to public libraries reveal.

The one major public library usage measure that did decrease was the number of times library users asked questions of reference librarians, dropping 18 percent from 1993 to 2012.

The popularity of U.S. public libraries is, it seems, at least as strong as it was before the web became a household word (much less a household necessity).

Rise of the e-book

For academic libraries, the data are more mixed. Circulation of physical items (books, DVDs, etc.) in U.S. academic libraries has been on a steady decline throughout the web era, falling 29 percent from 1997 to 2011. 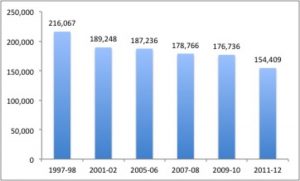 Total circulations (in 1000s) by U.S. degree-granting post-secondary institution libraries: 1997 through 2011. Chart created by Donald A. Barclay, using data from the National Center for Education Statistics.

More tellingly, over the same time span and among the same academic libraries, the annual number of circulations (of books, DVDs, etc.) per full-time student dropped from 20 circulations to 10 (down 50 percent). 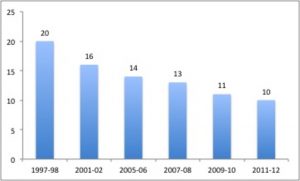 Number of circulation transactions per full-time student in U.S. degree-granting post-secondary institution libraries: 1997 through 2011. Chart created by Donald A. Barclay, using data from the National Center for Education Statistics.

That fewer books are circulating is hardly a surprise given the vast amount of scholarly information (the bulk of it purchased with academic library budget dollars) that is now available to students via their electronic device of choice.

Electronic scholarly journals have driven their print-format predecessors to obsolescence, if not quite extinction, while e-books have become increasingly plentiful.

E-books are not only plentiful, they are popular with academic users (in spite of some shortcomings in usability). For example, data provided to the author show that when the University of California, San Diego made a collection of academic e-books available to students and faculty through the popular JSTOR interface, the usage numbers proved impressive.

In just under a year, UCSD students and faculty used 11,992 JSTOR e-books, racking up 59,120 views and 34,258 downloads. In response to user demand, the UCSD Library outright purchased over 3,100 of the titles offered via JSTOR, making those e-books a permanent part of the UCSD library collection.

Who needs the encyclopedia?

As with circulation numbers, reference questions asked of librarians in U.S. academic libraries have undergone a sharp decline – standing now at 56,000,000 per year, down 28.4 percent from 16 years ago. For the 60 largest U.S. academic libraries, the average number of reference transactions dropped from 6,056 per week in 1994 to 1,294 per week in 2012 (down 79 percent). 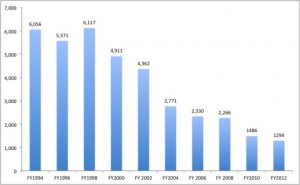 Average number of reference transactions per week for the 60 largest U.S. academic libraries: 1994-2012. Chart created by Donald A. Barclay, using data from the National Center for Education Statistics.

There’s not much mystery behind the drop in reference transactions. When I first began working as an academic reference librarian in 1990, hardly a day went by when I didn’t put my hands on such reference works as Places Rated Almanac, The Statistical Abstract of the United States and College Catalogs on Microfiche to answer reference questions.

Today, students access information digitally. The Google app on their smartphones allows students to look up information they once would have found only in analog, library-owned reference sources. And as for that old reference warhorse, the printed encyclopedia – Britannica churned out its final set in 2010.

Further contributing to the decline of in-person reference service is the fact that students are increasingly able to consult with academic librarians via the Internet.

Given only the above numbers, the hasty conclusion would seem to be that everything is online and nobody uses academic libraries any more.

But not so fast.

Even while circulation and reference transaction numbers were tanking, the data show a steady increase in the number of people actually setting foot in academic libraries.

The cumulative weekly gate count for the 60 largest U.S. academic libraries increased nearly 39 percent from 2000 to 2012. Library gate count data for all U.S. institutions of higher education show a similar (38 percent) increase from 1998 to 2012. 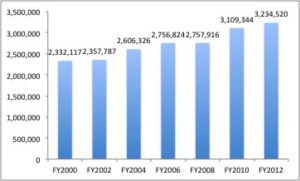 So if students are not going to the academic library to access print collections or ask reference questions, why are they going at all?

The lure of the academic library

Academic library square footage is increasingly being converted from space to house printed books to space for students to study, collaborate, learn and, yes, socialize. 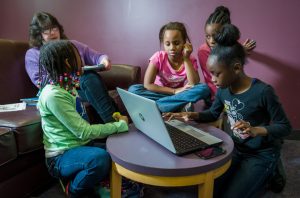 Besides providing some of the last refuges of quiet in a noisy, distraction-filled world, academic libraries have taken such student-friendly steps as relaxing (or eliminating) longstanding prohibitions on food and drink, providing 24/7 study spaces and generally recreating themselves to be comfortable and friendly rather than cold and forbidding.

Examples of how forward-leaning academic libraries are attracting students include: 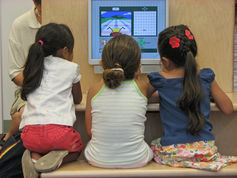 By thinking beyond the book as they reimagine libraries, academic librarians are adding onto and broadening a long learning tradition rather than turning their backs on it. In the words of Sam Demas, college librarian emeritus of Carleton College:

For several generations, academic librarians were primarily preoccupied with the role of their library buildings as portals to information, print and later digital. In recent years, we have reawakened to the fact that libraries are fundamentally about people – how they learn, how they use information and how they participate in the life of a learning community. As a result, we are beginning to design libraries that seek to restore parts of the library’s historic role as an institution of learning, culture and intellectual community.

Any library, public or academic, able to live up to so important a role will never outlive its usefulness.