Donald Trump has lately been called “treasonous” by some; others say he’s violated hisoath of office. What are the president’s Constitutional obligations — and who holds the president accountable? 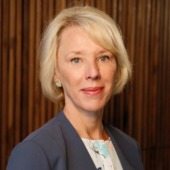 After his joint press conference with Russian President Vladimir Putin in Helsinki, U.S. President Donald Trump was barraged with criticism from both friends and foes.

Standing next to Putin, Trump repudiated U.S. intelligence that the Russians interfered with the 2016 election. Some have since questioned the legitimacy of his presidency, forcing Trump on Tuesday to backtrack several of his statements.

Thomas Friedman, a New York Times columnist, claimed on Monday that President Trump’s interactions with Vladimir Putin were a violation of the president’s oath of office. 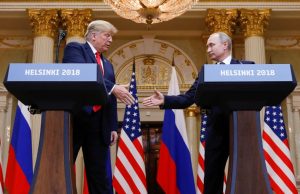 In a tweet, former CIA Director John Brennan reacted by claiming that the president’s performance “rises to & exceeds the threshold of ‘high crimes & misdemeanors.’ It was nothing short of treasonous.”

Do these claims involving the presidential oath, treason or – by inference – impeachment have any legal validity?

I am a scholar of both law and politics. Here are four important questions for readers to consider on these important concepts.

What is the presidential oath of office?

The presidential oath of office comes from the U.S. Constitution. It requires that the President recite the following statement upon taking office:

Some legal observers believe that the presidential oath reflects a unique personal duty to shield the Constitution from external and internal threats to its integrity and sustainability.

It could be argued that this presidential duty extends beyond preserving the Constitution itself to preserving the constitutional governmental order that it creates, the liberties it protects, and the nation and people it serves.

Can violations of the presidential oath be prosecuted or legally enforced?

The Constitution may impose a duty on a particular governmental officer, in this case the president, but that doesn’t mean the president’s failure to fulfill that duty can be punished or remedied by a court.

The sheriff, in other words, can’t go arrest the president for not following his oath, nor could the president be indicted for failure to uphold the oath. This isn’t an isolated instance: There’s no legal remedy through court action available for a perceived violation of a number of constitutional provisions.

Yet the Supreme Court has held, in a 19th century case involving a rebellion against the existing Rhode Island government, that the courts have no authority to require the U.S. government to comply with the Constitution’s Republican Form of Government Clause. The Court ruled that the question whether a state government is “republican” in nature and thus valid under the Constitution is a political choice to be made by Congress, the representative body of the states.

This “political question doctrine” has also emerged as a defense to recent lawsuits claiming that President Trump violated the Constitution’s Foreign Emoluments Clause by accepting payments from foreign officials at Trump businesses. That clause prohibits government officers from accepting presents from foreign heads of state without Congressional consent.
According to this argument – made in motions to dismiss the lawsuits against Trump – enforcement of the Emoluments Clause is vested in the political branches, perhaps through impeachment, rather than in a court.

The same analysis would apply to alleged violations of the Presidential oath of office. The oath contains vague obligations to protect or preserve the Constitution and appears to apply those duties to the President’s honorable discretion. It seems unlikely, just as with the Republican Form of Government Clause, that a court would be the place that alleged violations would be tried. Rather, it would more properly be considered a political question to be solved by the legislature. In other words, if people feel that Trump has violated the Oath of Office, they can encourage the House to impeach him.

Are violations of the oath grounds for impeachment?

Similarly, the definition of “high crimes and misdemeanors” in the Constitution’s Impeachment Clause likely is a political question insulated from review by the courts.

Thus whether perceived violations of the oath could come to constitute grounds for impeachment depends on what members of the House of Representatives think rather than on how the courts would define “high crimes and misdemeanors.”

For example, a federal judge can be impeached by the House and tried by the Senate. In 1993 the Supreme Court refused to address a federal judge’s claim that the Senate followed improper impeachment trial procedures by having a small committee first hear the charges against him rather than by holding the entire trial before the full Senate.

Because the Constitution provides that the “Senate shall have the sole power to try all impeachments,” the Court ruled that questions about the conduct of the impeachment trial process were political questions that were the Senate’s choice, not the Court’s job, to resolve.

According to the Constitution, the House of Representatives shall have the “sole power of Impeachment.” Scholars have thus concluded that the meaning of “high crimes and misdemeanors” is at the discretion of the House as a political – rather than a legal – matter. 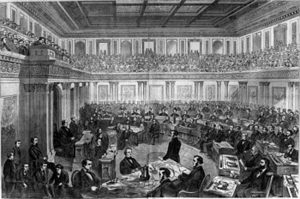 And when the framers debated the language and ultimately the definition of those terms at the constitutional convention in 1787, they came to no clear conclusion.

One of the most active participants in those debates, Alexander Hamilton, argued that impeachable offenses were those that involved abuse or violation of the public trust. That’s an ambiguous category that doesn’t necessarily require violation of any criminal statute, but rather depends on the judgment of the electorate and its representatives.

As Hamilton noted, impeachable offenses “are of a nature which may with peculiar propriety be denominated POLITICAL, as they chiefly related to injuries done immediately to the society itself.”

The current environment is highly charged politically, with divided loyalties and extreme polarization. In this context, the question whether the president violated his oath of office and whether his actions constitute grounds for impeachment will be resolved – as Hamilton expected – not by a legal process in the courts. Instead, it will be resolved through the political judgment of the people’s representatives in Congress.

Are allegations of “treason” reasonable or relevant?

The Constitution says “treason against the United States shall consist only in levying War against them, or in adhering to their Enemies, giving them Aid and Comfort.” 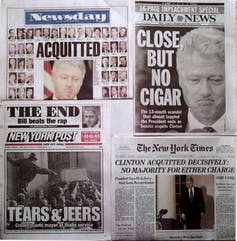 Under the current circumstances, a charge of treason could not lead to prosecution of this president. The charge has only been applied to betrayal of the United States during a time of war.

Indeed, because of the clause’s stringent requirements, only about 30 indictments for treason have been brought since the nation’s founding. The most recent was the 2006 indictment of an American involved in terrorism activities connected to Al Qaeda.

Thus to be valid, charges of treason against President Trump would have to overcome a very high legal bar – with evidence involving aid and comfort to a battlefield enemy – a very unlikely outcome.