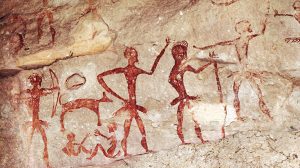 Archaeological remains, traditional tribes and conflict among chimpanzees can tell us much about the history of human warfare. 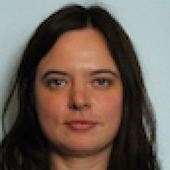 The question of whether warfare is encoded in our genes, or appeared as a result of civilisation, has long fascinated anyone trying to get to grips with human society. Might a willingness to fight neighbouring groups have provided our ancestors with an evolutionary advantage? With conflicts raging across the globe, these questions have implications for understanding our past, and perhaps our future as well.

The Enlightenment philosophers Thomas Hobbes and Jean-Jacques Rousseau had different visions of prehistory. Hobbes saw humanity’s earliest days as dominated by fear and warfare, whereas Rousseau thought that, without the influence of civilisation, humans would be at peace and in harmony with nature.

The debate continues to this day. Without a time machine, researchers examining warfare in prehistory largely rely on archaeology, primatology and anthropology.

Earlier this year, details of one of the most striking examples of prehistoric intergroup violence were published – 27 skeletons, including those of children, had been found at Nataruk near Lake Turkana, Kenya. Blades embedded in bones, fractured skulls and other injuries demonstrated this had been a massacre. The bodies were left, unburied, next to a lagoon on the lake’s former western shore, around 10,000 years ago.

The Nataruk finds are claimed as the earliest evidence for prehistoric violence in hunter gatherers. A 12,000-14,000 year-old cemetery at Jebel Sahaba in Sudan was previously thought to be the first, but its date is less certain and some have claimed that since the bodies were buried in a cemetery they were linked to a settlement, and not true hunter gatherers. 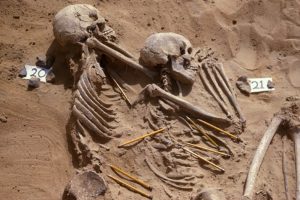 The evidence for warfare becomes clearer in the archaeological record after the beginning of the agricultural revolution around 10,000 years ago, when humanity moved from hunting and gathering to farming settlements. War may have existed before then, but there are few remains from the early days of Homo sapiens, and causes of death can be extremely difficult to ascertain from skeletons. This means that at the moment, the archaeology remains inconclusive.

Animal behaviour studies provide another means of exploring the debate.

Jane Goodall’s discovery that chimpanzees make war shocked the world. A group in Tanzania were observed beating members of a rival community to death, one by one, before taking over the defeated group’s territory. Despite attempts to dispute Goodall’s findings, similar patterns of behaviour were later discovered in other groups, and evidence for warfare in one of our closest relatives became indisputable.

When chimps go to war

However, bonobos, also known as pygmy chimpanzees, share as much DNA with us as chimps do, but are overall more peaceful, despite some anecdotal reports of aggression between groups. This is partly attributed to differences in the two species’ social systems. For example, bonobos’ societies are female-dominated, which perhaps keeps male aggression in check, whereas chimpanzees’ social hierarchy is male-dominated.

How did our last common ancestor behave? Were they like bellicose chimpanzees or peaceful bonobos? Although parallels between all three species are fascinating, using them to answer this question is difficult, as ultimately each followed its own evolutionary pathway.

But chimps demonstrate that war without civilisation does exist in a species similar to our own. Not only that, but similarities can be seen between chimpanzee and human hunter-gatherer warfare. For example, in both species, an imbalance of power and risk-averse tactics are often a feature of attacks: a group of chimpanzees will assault a lone rival, and hunter-gatherer groups avoid pitched battles in favour of guerrilla warfare and ambushes.

Anthropologists, whose knowledge of “traditional” societies could provide clues as to how our ancestors behaved, also took sides in the Hobbes-Rousseau debate. Margaret Mead’s research on Samoan islanders led her to conclude that “warfare is only an invention”, which had not existed before civilisation, while Napoleon Chagnon reported that among the Venezuelan Yanomamö, fighting and raids on enemy villages were commonplace. Both were criticised: Mead for overlooking widespread evidence of violence in Samoa, and Chagnon for inappropriately using a society of small-scale farmers as a proxy for prehistoric hunter-gatherers. 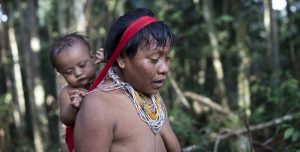 Chagnon’s claim that the Yanomamö live ‘in a state of chronic warfare’ is hotly disputed. Sam valadi, CC BY

Of course, any traditional society that anthropologists choose to study has still been exposed to outside influences. And they differ vastly from one another, not least in their participation in warfare. But early accounts suggest that lethal aggression did exist between some hunter-gatherer groups before their contact with other societies.

Waldemar Jochelson, who studied the Siberian Yukaghir in the 1890s, described them as having persecuted their enemies like “wild beasts”. Similarly, the Andamanese, from isolated islands in the Bay of Bengal, had longstanding feuds between themselves and participated in dawn raids on enemy camps.

It’s difficult to conclude that prehistory was free from intergroup aggression. Military historian Azar Gat and evolutionary psychologist Stephen Pinker, among others, argue that warfare existed before the agricultural revolution. Pinker also claims that violence has overall decreased over the centuries. This may seem difficult to believe given the gloomy headline news in 2016, but such a zoomed-out view of history at least suggests hope for the future.