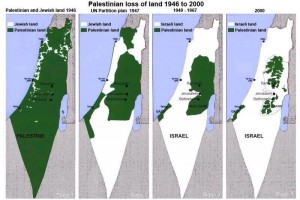 From Juan Cole (Professor of History, University of Michigan), at Informed Comment:

For Clinton to imply that Trump, by saying he wanted to be neutral in negotiations, was indicating that he would compromise on Israeli security is just dishonest. I’m not sure what conventional security threats Israel has. Lebanon is weak and a mess. Syria is in complete disarray. Jordan and Egypt have peace treaties with Israel. Those are the immediate neighbors. Libya has fallen apart. Tunisia doesn’t care and anyway is also small and weak. Turkey and Israel have their tensions, but do a great deal of business, including military business, with each other. Iraq is in disarray. Iran is so distant as to pose no conventional threat, and does not have nuclear weapons, which Israel does. So what is the threat to Israeli security Clinton is talking about? It is that Palestinian children might not have to live under Occupation.

Clinton perpetuates the Israeli propaganda talking point that they are the ones who are being oppressed, and that even-handed moves toward peace threaten their security, which is alleged to be precarious.