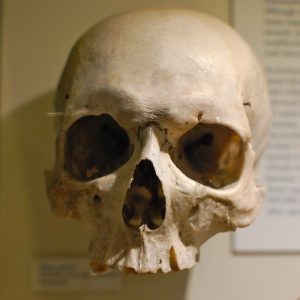 Skull of a Homo sapiens (a.k.a. modern human) individual, on display at the Harvard Museum of Natural History / Photo by Chris Devers, Flickr, Creative Commons

Homo sapiens (‘wise man’), or modern humans, are the only species of human still around today. 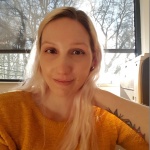 Homo sapiens (‘wise man’), or modern humans, are the only species of human still around today. Despite having invented countless ways of labelling the world around us, we have so far done a surprisingly poor job at defining ourselves. Originating in Africa somewhere around 200,000 years ago, and adventuring beyond that initial continent from at least 55,000 years ago, with our characteristically slender skeletons and big heads, one would think the story is quite clear cut.

However, there is more than one way to define a species – for instance, not just biologically but also based on morphological features or on DNA – and modern humans are still evolving and changing. Our brain size, for instance, has actually shrunk over the past 20,000 years (some people’s a bit more than others). Genetically, we are not a 100% Homo sapiens only: non-African humans have on average around 2% Neanderthal DNA, and we are also known to have interbred with at least one other, now-extinct human species: the Denisovans. Modern humans spread across the far reaches of the globe, and developed technologies and culture eventually showing symbolic thought by at least 40,000 years ago. From a long existence as hunter-gatherers, the eventual switch to agriculture helped shape the world as we know it today with towns, cities, and an increasingly large population that is now threatening to burst out of the planet’s seams.

So, since the story is not exactly simple, any definition will have to stretch beyond just a few sentences, too.

The Origins of Our Species

The place where modern humans developed from their ancestors to the point where they became recognisably modern human was for a long time a source of fierce bickering and arguing. Initially, Africa was ignored due to a lack of fossil evidence (which made it look like an archaeological backwater) in favour of models that favoured other locations of origin, pointed at a development in multiple regions simultaneously, or postulated that modern humans evolved from Neanderthals (which is not the case).

However, thanks to new archaeological discoveries over the last few decades, better dating, and genetic evidence, it has become clear that Africa is actually the place that houses our common origin. The dominant view today is that archaic humans – usually thought to be Homo heidelbergensis, who in itself developed from Homo erectus – gradually evolved into Homo sapiens by approximately 200,000 years ago, in either Eastern- or Southern Africa. The first signs of the modern human benchmark of a high, round skull appears at Omo Kibish (Omo 1) in Ethiopia around 195,000 years ago. Within Africa itself, we were not an isolated species; some degree of mixture with archaic species took place, but the details of this are not yet clear.

The first known brave Homo sapiens souls who ventured out beyond Africa are found at the sites of Skhul and Qafzeh in Israel, where burials have been dated to be older than 100,000 years ago – and perhaps even up to a staggering 130,000 years ago. However, the main wave(s) of modern humans who left Africa decided they needed a bit more preparation time for the wide world beyond, and waited until around 55,000 years ago. This time, larger numbers spread to way further reaches than ever before. Eastern Eurasia was reached by at least 40,000 years ago; Australia between 53,000-41,000 years ago (although it now looks like another, possibly earlier group of humans from an earlier migration already reached the north of Australia by 65,000 years ago) ; Europe – the last stronghold of the Neanderthals – was not braved until around 45,000 years ago; and the Americas took longer still, until around 15,000-14,000 years ago. 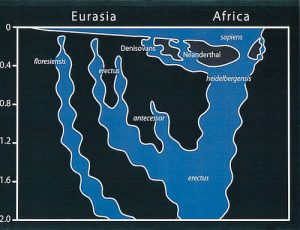 Chris Stringer’s hypothesis, depicted in a graph-model, of the evolution of several species of genus Homo over the last 2 million years (vertical axis), as published in Stringer, C. (2012). “What makes a modern human”. Nature 485 (7396): 33–35. / Image by Chris Stringer, Wikimedia Commons

Along our trip around the world (not in 80 days, I imagine), Homo sapiens encountered other human species who had beaten them to certain regions and put their stamp on it. Interestingly, some of these, certainly at least the Neanderthals and Denisovans, also put their stamp on us: we interbred with them, and their DNA is still visible in non-African DNA today. Interestingly, this was not our first connection with these two species, as we share a common ancestor with them around 500,000-600,000 years ago, too. So, all in all, our evolution was obviously not a single, straight line, but rather like a frustratingly difficult puzzle. 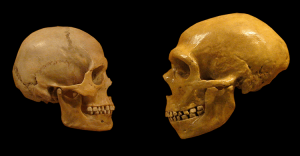 Skulls of Homo sapiens (left) and Neanderthal (right) from the Cleveland Museum of Natural History. This derivative work shows the skulls from the original display on a plain black background and with the annotation removed. / Photo by hairymuseummatt, Wikimedia Commons

Despite variations both when it comes to different points in time as well as differences between various corners of the planet, human skeletons have a basic set of features in common that set us apart from other species. Even early members of our species had a more slender and gracile skeleton than our more robust predecessors, which when spreading out to colder regions meant we were less well able to cope with the low temperatures, as our lighter builds make it more difficult to retain heat.

Luckily, modern humans are also characterised by having very large brains (on average 1300 cubic centimetres), housed in a higher and rounder braincase – giving us high, vertical foreheads – than sported by other human species. This undoubtedly helped us in both using fire to our advantage and in developing pretty useful clothing to keep us warm when dealing with less instantly pleasant temperatures.

After the first clear characteristics tying in with this skull shape began to appear around 200,000 years ago, in Africa, already by 150,000 years ago had early modern skulls undergone a basic reshaping of the skull form to fit with the modern pattern. Another point of contrast with other early humans is that we have almost none of the heavy brow ridges they show; we have a well-defined chin and our faces are tucked in under our braincases rather than protruding forward. 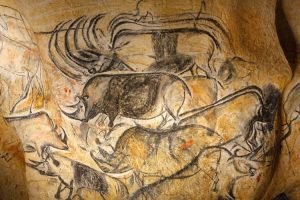 Replica of the Panel of the Rhinos from Chauvet Cave. The art at Chauvet Cave has been dated to c.33,000-c.30,000 years ago. / Photo by Patilpv25, Wikimedia Commons

Modern humans started off as hunter-gatherers, foraging and killing what they needed to survive and, when needed, moving around in pursuit of available food resources. From around 9000 years ago onward, the Neolithic saw the beginning of farming, which changed the whole dynamic of societies to a more sedentary lifestyle, with permanent residences popping up all over the place.

The use and development of tools – increasingly complicated ones – was and is essential to Homo sapiens’ survival, right from our beginnings onwards. From retouched flake tools in the Middle Palaeolithic industry to the sophisticated bone, antler and ivory tools – including sewing needles and spear throwers – of the Late Palaeolithic through to agricultural tools with the transition to agriculture from around 9000 years ago, modern humans became ever more adaptable and versatile. Of course, one could argue that although we can now create complex tools such as the smartphone, we have become so glued to these screens this may come with certain side-effects.

Homo sapiens, moreover, developed from initially living mostly in natural shelters such as caves, to constructing their own huts from wood or even mammoth bones, and eventually forming settlements and cities from a whole range of materials. Modern humans would never have reached this point if not for fire, though, the more habitual use of which has been around since at least 400,000 years ago (by our ancestors). Language must be mentioned, too, because although we can barely keep our mouths shut nowadays it obviously did not start out that way. It must have developed somewhere during our hunter-gatherer existence, but the exact point proves very elusive indeed.

Art has been around for ages, too, with the most definitive and widespread evidence for actual symbolic art stemming from Europe by at least 40,000 years ago, with its magnificently painted caves such as Chauvet Cave and Lascaux Cave.

The Question of Modernity

This artistry forms part of the suite of modern features us modern humans tend to feel sets us apart from the rest of the world around us. But at which point in our evolutionary history did we become behaviourally modern humans, and what exactly does this entail?

Although a universally accepted definition is seemingly too much for our behaviourally modern brains to come up with, a key component seems to lie in our ability to communicate within a symbolically organised world and in using symbols in different social and economic contexts.

The ‘when’ question is as of yet harder to answer. This behaviour obviously did not simply pop up overnight, in groups all across the Old World, as if a universal switch had been flicked. Modernity consists of many different features that appeared gradually throughout time and space. Symbolic burials rear their heads as early as c. 115,000 years ago (Skhul Cave, Israel), with red ochre perhaps being used symbolically not long after. By 60,000 years ago most of the aspects we associate with modernity had appeared, in varying packages, among which complex tools; evidence for rituals; and complex treatment of the dead. By at least 40,000 years ago, fully modern behaviour – including figurative art; ritualistic or mythical imagery and signalling; and artefacts such as musical instruments – is visible throughout the Old World.

It used to be hip to attribute any kind of possibly symbolic prehistoric behaviour exclusively to Homo sapiens, rather than for instance the Neanderthals, who were around until c. 30,000 years ago. However, it is clear that they, too, showed at least certain aspects of modernity, and we have no way of knowing whether the Neanderthals would have eventually developed into MacBook-hugging techies or not. Homo sapiens holds the monopoly because after c. 30,000 years ago, we were the only humans left – albeit carrying small portions of DNA from other humans with us.