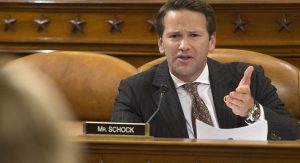 The Office of Congressional Ethics was saved from the landfill  — where House Republicans had tried to bury it — by public outcry and a couple of tweets from President-elect Donald Trump.

But few noticed a sentence that did make it into the package of House rules changes passed Tuesday, making it more difficult to access documents having to do with the operations of a lawmaker’s office.

“Records created, generated, or received by the congressional office of a Member … are exclusively the personal property of the individual Member [emphasis added]… and such Member … has control over such records.”

Who cares whether a congressional office’s budget documents, maintained at taxpayer expense, belong to each individual member, rather than Congress as a body?

Maybe the Justice Department, for one. In investigating allegations of public corruption or misuse of funds, criminal investigators frequently need to subpoena such records.

Usually, the Fifth Amendment and that bit about self-incrimination does not apply to documents per se, according to Mike Stern, former senior counsel to the U.S. House of Representatives from 1996 to 2004. But there is something called an “act of production” privilege, meaning that just producing the document would be incriminating in itself.

That privilege doesn’t apply to government agencies or corporations. But if a lawmaker is being investigated for misuse of taxpayer funds and law enforcement authorities subpoena her spending records, under this rule, she can assert the privilege to withhold them; they belong to her, not to Congress.

Let’s look back to our favorite disgraced former congressman, Aaron Schock (R-Ill.) to put this in perspective. Yes, the one who lavishly decorated his office to look like a Downton Abbey drawing room and was known for the adventurous antics he shared on his Instagram account. (Who wouldn’t want to see Schock glacier-jumping and riding the waves?)

Schock was indicted for wire fraud, making false statements and filing false federal income tax returns, among other charges. Before his indictment, the Justice Department and Schock’s lawyers battled over who held control over his MRA records (members’ representational allowance, or office financial documents, which includes tallies of expenditures for redecorating): Congress, or Schock himself.

At first, the court rejected Schock’s “act of production” privilege, saying “the congressional office was a collective entity” and thus had no right to claim the Fifth. But it later reversed the ruling and gave the government time to reconsider, “given the importance of the issue…and the unprecedented consequence…to Schock and therefore all current and future Members of Congress as to their publicly-funded, non-private, public or official Congressional records,” according to a government court record.

Prosecutors in the case were not pleased.

“They ask this Court to be the first court to recognize that Schock and every other current and future Member of Congress have a Fifth Amendment act-of-production privilege, thereby effectively screening [public or official documents] from public scrutiny,” prosecutors in Schock’s case wrote in a court document in Aug. 2015. “The government respectfully submits that this argument is repugnant to the fundamental principle that no man is above the law and that it should therefore be rejected.”

We don’t know where this tussle stands since most docs in the case are sealed, Stern said. The trial has been delayed until summer 2017.

“It strikes me as an overreach,” said Sara Lord, a partner at Arnall Golden Gregory who used to prosecute public officials while at the Justice Department. “I think what would concern me is that it would extend the member’s right to block production of documents that would otherwise have been treated as public records or official records that belong to the government.”

Additionally, this could also put congressional staffers in a tough spot, Lord speculated.

“This could become a method of control over the possibility your staff could be cooperating in an investigation,” Lord said. “If you as a staffer produce a document,” she said, will the lawmaker throw you under the bus for violating the rule?

And the session has only just begun.