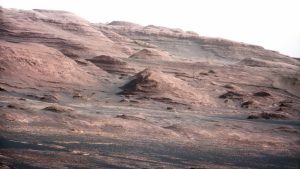 This color-enhanced image of the Martian landscape was taken by NASA’s Curiosity rover in 2012. / NASA/JPL-Caltech/MSSS

In a recent op-ed, President Barack Obama renewed his call, first made in 2010, for Americans to reach Mars by the 2030s. And in late September, Elon Musk, the CEO of SpaceX, gave a blockbuster speech in which he outlined a proposal not just to send people to Mars, but to colonize it with a million people — making humans “a multiplanetary species.” How close are we to getting to Mars — and staying there?

SpaceX’s Interplanetary Transport System, a rocket and spacecraft combo, aren’t quite ready for launch. For one, Zubrin doesn’t think they make the most efficient use of “payload” — or fuel, which, on Mars, will need to be produced on-site, from methane and oxygen.

Zubrin walks us through the logistics: Musk is proposing a “two-stage vehicle” wherein the first stage is reusable, and it returns to Earth. Meanwhile, the second stage goes into orbit and gets refueled. “Now, this is a very large vehicle. It is about four times the takeoff thrust of a Saturn V, so it’s like a Saturn XX. And the upper stage is like a Saturn V. And he refuels that on orbit and then shoots it all the way from low-Earth orbit to the surface of Mars, where it is carrying a very large passenger compartment, which stays on the ship. He unloads the passengers, then he refuels the ship and shoots it back to Earth.”

The giant spaceship is delivering hardly any payload permanently to Mars: “The engines on this upper stage weigh 60 tons. That could be 60 tons of payload.”

Instead, Zubrin suggests jettisoning the (spent) upper stage just before the ship escapes Earth’s gravitational field. This would lighten the ship’s load as it heads for Mars with just a small propulsion system for landing, and it would also get the stage moving back towards Earth for snappy reuse.

It would be back in low-Earth orbit in a week as opposed to two and a half years, and the returned stage could be used five times every Mars “launch window” (about every 26 months), he says.

The habitat needed to make human travel to Mars possible should stay put, on the planet. “You should unload that [habitat] — the colonists are going to need it. Just keep a small cabin on board the ship and shoot that back to Earth with the pilots and maybe a few colonists who want to go home.”

This would reduce fuel-making requirements for sending the payload back, by at least a factor of five, he says.

Zubrin reasons that with alterations to its designs, SpaceX could have people on Mars by the end of the 2020s. But the capability may be even closer than that: Zubrin says that with support from the new president of the United States this spring, we could get to Mars by the end of his or her second term.

For one, Zubrin points out that technology-wise, we’ve already done some heavy lifting.

By going to the moon, we’ve mastered hydrogen-oxygen rocket engines, multistage heavy-lift vehicles, in-space life support, spacesuits — the list goes on and on. “What we have to do now for the Mars mission is scale a few things up, modify some things, but we’re working within a craft that has already been developed. We’re advancing a craft instead of creating a craft.”

While experts like Zubrin say that our technology may soon be ready for a trip to Mars, others are mulling another crucial aspect of the mission: Are we ready to live on the Red Planet? Sheyna Gifford, now a scientist at the Saint Louis Science Center, was a medical officer on HI-SEAS, NASA’s yearlong simulated mission to Mars. She says that colonizing a new planet will be exhausting work.

“If you thought owning a house on Earth was a time suck, try owning a house in space,” Gifford says. “Everything takes longer because half the time, you don’t have what you need and running to the corner store is not an option. So you either have to ‘science it,’ or 3-D print it, or invent it.”

And while a Mars colony would eventually have enough people to provide “backup” for all the work to be done, crew members on the first few Mars missions won’t have that luxury.

“We were at work for 366 days straight … and that’s a problem,” Gifford says. “Humans need a break. Unfortunately, you still have to get up and water the crops and check the computer system, make sure the air compressors and filters are working. There’s no way to take a break. At the same time, you must. And this is one of these questions we have to answer before we go [to Mars], even if the technical ones are solved.”