Figurative art may derive from Neanderthal hand prints and the hunter’s keen eye for perceiving animals. 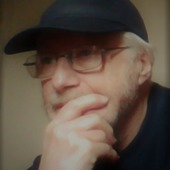 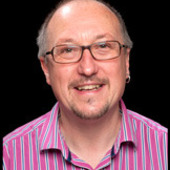 Visual culture – and the associated forms of symbolic communication, are regarded by palaeo-anthropologists as perhaps the defining characteristic of the behaviour of Homo sapiens. One of the great mysteries of archaeology is why figurative art, in the form of the stunningly naturalistic animal depictions, appeared relatively suddenly around 37,000 years ago in the form of small sculpted objects and drawings and engravings on cave and rock shelter walls.

Since the discovery and authentication of such Palaeolithic art more than a century ago, theories have abounded as to what this meant to its Ice Age hunter-gatherer creators. But theories often say more about modern preconceptions regarding the function of art – how can we tell if we’re on the right track to understanding the remote and alien societies that created the first images?

In a radical new approach to the issue, we applied recent findings from visual neuroscience, perceptual psychology and the archaeology of cave art, that begin to make sense of the intriguing representations and forward what we hope can be tested scientifically.

The first clue to their provenance came from the ancient hand marks (positive prints and negative stencils), which predate the earliest animal depictions by a considerable period. Recent dating shows that they were created by Neanderthals more than 64,000 years ago. The second clue came from the widespread inclusion of natural cave features – such as ledges and cracks – as parts of animal depictions. The final clue relates to the environment in which Upper Palaeolithic hunter-gatherers, along with other predators, were stalking the large herbivores – such as bison, deer and horses – that formed their prey and which often lay hidden in camouflage in the tundra environment. 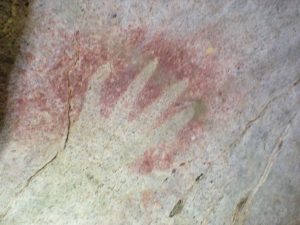 This hand stencil has been deliberately placed so its left side matches with a natural crack in the wall of El Castillo cave.Photo Paul Pettitt and courtesy Gobierno de Cantabria., Author provided

We argue that hand marks initially supplied the idea to archaic humans that a graphic mark could act as a representation, however basic it was. This was a beginning of sorts – but how could hand marks give rise to the more complex animal depictions? We needed to be able to explain how that gap was bridged. 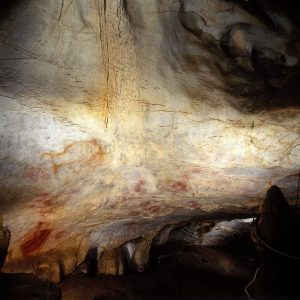 Fortunately, the way hunters relate to the environment has changed little since early times in that they remain acutely sensitive to particular animal contours. So much so, that in challenging lighting situations – and where prey might be well camouflaged – the hunter becomes hypersensitive to such features.

In such ambiguous circumstances, it’s better to “see” an animal when it’s not there – to mistake a rock for a bear – than not see it. Such better-safe-than-sorry hair-trigger cues are cognitive adaptations that promote survival. In dangerous conditions, the human visual system becomes increasingly aroused and is even more easily triggered into accepting the slightest cue as an animal.

In short, we are preconditioned to interpret ambiguous shapes as animals. Recent evidence from visual neuroscience shows that when individuals are conditioned to see particular objects – faces, say – they are more likely to see them in ambiguous patterns. Upper Palaeolithic hunters conditioned themselves due to the need to detect animals, but this effect was reinforced by the suggestive features of the caves. 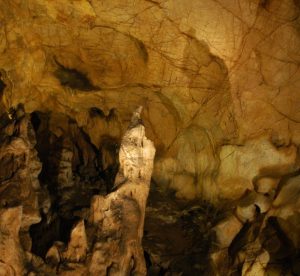 In El Castillo cave, this natural stalagmite column bears a boss in the shape of an upright bison, which has been elaborated by painting in black pigment. Photo with thanks to Marc Groenen and courtesy Gobierno de Cantabria., Author provided

Caves are full of suggestive cues. They are dangerous places, often inhabited by predators, thereby stimulating increased arousal levels. Hunters entering the caves with an overactive visual system will have regularly “mistaken” the natural cave features for animals. The cave walls also simulated the outdoor environment, where hunters regularly had to be able to spot their prey in camouflage.

All the hunter needed to do to “complete” a depiction was to add one or two graphic marks to the suggestive natural features based on the visual imagery in their “mind’s eye”. A typical example of this can be seen at Chauvet cave where two giant deer (Megaloceros) are depicted by complementing the natural wall fissures (highlighted in brown) with lines (highlighted in black) painted onto the cave wall to complete the animal outlines. This potentially explains how the very first representational depictions arose. 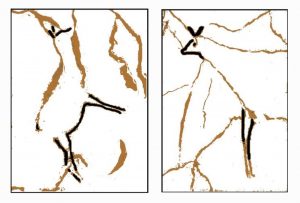 We’ve tried to combine our respective expertise in visual psychology and Palaeolithic art and, unlike many other theories, our approach is open to refutation. For example, if someone finds depictions of animals or similar that predate the first hand marks, this would overturn our main proposition. Similarly, if earlier figurative depictions come to light that do not derive from natural features, this would also challenge our theory.

But as we were making the final touches to our academic paper, valuable corroborative evidence came to light supporting the theory. Namely, the dating of a negative hand stencil and a geometric mark from the Monte Castillo cave art complex in Spain dating to a minimum of 64,000 years ago and almost certainly made by Neanderthals.

When later humans entered the same caves and saw these, the Neanderthals may literally have “handed on” to our own species the notion that a graphic mark could act as a figurative representation. Thanks to the primed visual system of the later hunter-gatherers – and the suggestive environment of the caves – it was Homo sapiens who took the final step creating the first complex figurative representations, with all the ramifications that followed for art and culture.