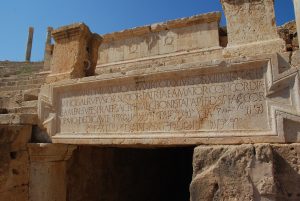 Inscription at the Theatre of Lepcis Magna / Wikimedia Commons

When we think of ancient inscriptions we instinctively associate them with the idea of a message engraved in stone meant to be delivered to eternity. In theory, it was so also in the mind of the ancient Romans, but, as we know, theory does not always match practice: evidences from the whole of the Roman empire show that inscriptions suffered in antiquity a surprisingly high mortality rate, in some instances even higher than that of the Romans themselves. 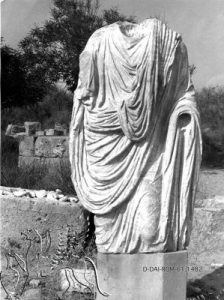 The case of Lepcis Magna, one of the most prosperous city of North Africa and capital of Tripolitania, is really quite striking. Here the public spaces were clustered with a great number of statues dedicated to emperors, high-ranking officials and local benefactors; the statues were set on marble bases which bore a dedicatory inscription stating the name of the honorand, the reason why he was awarded such honour and who set it up. But other that standing placidly in the forum for centuries, nearly all of these monuments led instead a very busy and rather short life. 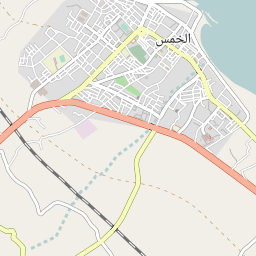 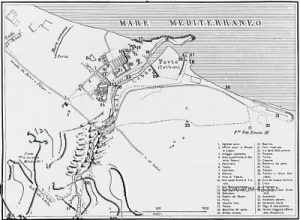 Around the middle of the II century AD, a mother had four monuments set up for her sons, but not even a century later the group was dismembered: the inscriptions were erased and the bases were moved to three different buildings where they were recycled for new statuary monuments. Similarly, a civilian officer had his dedication engraved over an earlier one, but was himself sacrificed when the base was later turned around and re-dedicated to the personification of the city, the Genius Coloniae.

A pair of bases for imperial horse statues, set in a dominant and thus particularly appealing position within the forum, were both repeatedly recycled – each time destroying the previous inscription – until they were finally used to support couples of standing statues of different, later emperors.

More than a few stones were used even up to four or five times, with inscriptions carved and cancelled on each face, layered one on top of the other, or a mixture of the two; the bases were turned upside down and around, laid down on one of its sides, cut in halves to create two new ones and then reassembled, in a constant process of destruction and creation. But besides the variety of ways in which the inscribed bases of Lepcis Magna could be recycled, what is most striking is the pace of this process: nearly every 20/25 years these monuments were doomed to change owner. Even a base dedicated to “the eternal memory of our benefactor” did not escape this fate, and twenty years later it was recycled for someone else.

Only when the sands covered the abandoned city the inscribed stones of Leptis were finally set to rest, and this time it was really for eternity.