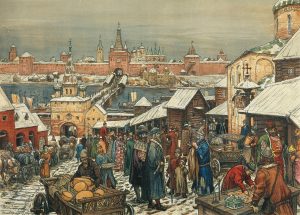 Economic, legal, and social institutions emerged that were essential to the development of an extensive and complex market economy. 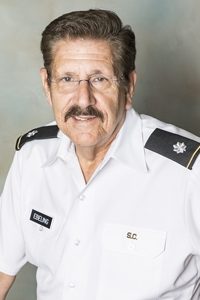 While the manors, to a great extent, survived through a rather comprehensive system of self-sufficiency, the towns and those who resided in them acquired many of the things they needed through trade. Theirs was, therefore, an exchange and money economy.

But commerce, trade, and money exchange implies a system of property rights that permits ownership by individuals, and rules and laws of contract among the agents.

It was in the towns of the Middle Ages that there began to emerge the economic, legal, and social institutions that are essential and, indeed, the prerequisites for the development of an extensive and complex market economy.

It is in the urban areas of Medieval Europe that we see the foundations for the modern age of capitalism, with its traditions and legal protections for individual rights, private property, and the emergence of an economic order in which each participant fulfills his own wants by serving others through production and trade – and an interdependency that naturally follows with an exchange-based system of division of labor.

While the institutions of property and contract slowly emerged during this period, it would be a great error to interpret this to mean that Medieval town life in any way reflected a free market setting. If anything, it was the opposite.

Competition as we know it today did not exist, and would have been considered dangerous and an undesirable way of doing business. Prices and wages were all controlled on the basis of conceptions of “fairness” and “justice,” as conceived at the time.

Communal ownership and management of property in the towns was a common practice in a number of areas. For example, there was a common pasture on which the townspeople grazed their livestock; town control of the grain mill, with all those living in the town having to use the municipal facilities; often even bakeries, ovens and market places would be communally owned and managed in a similar manner.

Medieval Guilds and the Regulated Economy

The real institutional mechanism for economic regulation in the Medieval towns was the “guilds.” The “guilds” were occupational associations that determined who was permitted to trade in the town, and under what terms and how the product or service was to be produced and offered on the market.

Foreign merchants were permitted to trade in a town only under special permit. Their movements were watched, they were not allowed to “under sell” the town’s merchants, and could only offer products of specified qualities and types.

Among the townspeople themselves, the “guilds” set lots of things: the rules for apprenticeships – who and how many people might enter a profession or occupation each year under a “master” who was a member of a guild; the methods and materials that might be used in producing goods; the hours when businesses might be open for trade; that goods could not be withdrawn from the shelves until a certain time of the day, and only sold on the guild-controlled markets; and all prices for both products and resources, fixed within maximums and minimums above and below which were violations of the guild codes and subject to criminal prosecution.

Sir William Ashley, in An Introduction to English Economic History and Theory (1909), recounted some episodes of such regulations and how they were enforced:

In the year 1311, Thomas Lespicer of Portsmouth had brought to London six pots of Nantes lampreys [an eel-like water animal with a jawless sucking mouth]. Instead of standing with his lampreys for four days after his arrival in the open market, under the wall of St. Margaret’s Church in Bridge Street [as was required by law], he took them to the house of Hugh Malfrey, a fishmonger. There he stowed them away, and sold them a couple of days after to Malfrey, and without bringing them to market at all.

They were brought before the mayor and alderman, confessed their guilt, and were forgiven; Thomas gave an oath that henceforth he would always sell lampreys at the proper place only, and Hugh that he would always tell strangers where they ought to take their lampreys …

[In the year 1364] John-at-Wood, a baker, was charged before the common sergeant with the following offense: “Whereas one Robert de Cawode had two quarters of wheat for sale in common market on the pavement within Newgate, he, the said, John, cunningly and by secret words whispering in his ear, fraudulently withdrew Cawode out of of the common market; and then they went together into the Church of the Friars Minor, and then John bought the two quarters [of wheat] at 15.5 pence per bushel, being 2.5 pence over the common selling price at the time in that market, to the loss and great deceit of the common people, and to the increase of the dearness of corn.

At-Wood denied the offense … Thereupon, a jury of the venue of Newgate was empanelled, who gave a verdict that At-Wood had not only thus bought the corn [wheat], but had afterwards returned to the market, and boasted of his misdoing; this he said and did to increase the dearness of corn.

Accordingly, he was sentenced to be put into the pillory for three hours, and one of the sheriffs was directed to see the sentence executed and proclamation made of the cause of the offense.

The rationale for the guilds and their rules and regulations of prices, production, and entry into professions and occupations and trades was, they said, to maintain reasonable prices for customers and minimum qualities of the goods offered to them in the market place.

In fact, the guilds served as a legalized avenue for the monopolization of trade within crafts and professions. It also was a retarding influence on any improvements in the qualities of goods, or in the varieties of commodities offered on the market, and a disincentive on the part of craftsmen and professionals to try to lower their costs of production and increase their revenues by offering their goods at reduced and more attractive prices.

All such behavior – quality improvements, increased variety, lower selling prices – were declared to be “unjust” and “unfair” trading practices that would harm all the “honest” men in the various lines of production and trade. Such market conduct, it was claimed, would destabilize markets, disrupt traditional standards of doing business, and harm both producers and consumers in the long run. It was better to control and limit supply, methods of production, and prices and wages to customary paths, it was asserted, to assure “continuity” to town and commercial life.

It would be incorrect to suggest that there were no opportunities or avenues for experimentation in trade. The most successful of these avenues was the Medieval Fair. A trade fair usually required the permission of the king, and was most frequently bestowed upon on a local Lord or a church dignitary, who would act as the “sponsor” for the event.

They were frequently held at the crossroads of famous and much-travelled trading routes, and were often where towns were founded that later became famous cities.

Their times were selected to coincide with religious festivals or other holidays that would attract large gatherings of people. They might last for a few days, or up to six weeks. The more successful and prominent fairs became national or international institutions throughout Europe, attracting merchants and tradesmen from all parts of the continent. Besides business, the fairs also served as occasions for social diversion and merry-making, with sideshows, wild animals, dancing bears, magicians, musicians, and “freaks.”

The duke or bishop hosting the fair would try to promote its success by arranging that the merchants, dealers, and tradesmen traveling to the fair would be exempt from the usual taxes, tolls, and trading regulations and restrictions while these individuals were at the fair. The noble or religious sponsor did so for personal gain – they received special fees and taxes from the participating merchants and tradesmen.

The relatively free trade environment that surrounded the events resulted in them coming to be called “free fairs.” This system of trading fairs came to have two important functions:

First, it acted as a medium through which the different parts of Europe could have regular, though infrequent, contact with each other, and be made familiar with the types and qualities of goods and their methods of manufacture.

Second, it introduced conceptions of rules of commerce, contract, and property rights in an institutional setting in which the gains from exchange demonstrated the enhanced opportunities for mutual benefit and profit when regulations, tolls, and taxes did not rigidly hamper the free flow of men and goods. People began to learn the lessons offered from a practice of freer trade.

In summary: political, social, and economic life in the Middle Ages revolved around two sets of institutions:

Even with emerging appreciation and recognition of property rights and legal contract relationships for commerce and exchange in the towns, the economic system was one of strict regulation of prices, production, and employment through the craft and professional guilds.

The structure of the Manorial and Guild Systems also meant that the economic focus, the political loyalties, and social relationships tended to be limited to extremely narrow geographical confines. Little attention and few political or economic ties connected the various parts of Europe for the most part during this long period of history – other than the periodic “Free Fairs.”