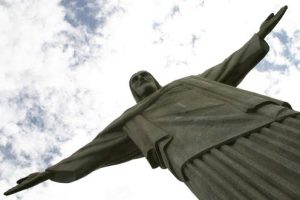 For human groups to grow from small, intimate communities to the huge interconnected societies we know now, people needed to be willing to cooperate with strangers. Religion might have played a big role. 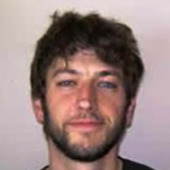 For the bulk of our evolutionary history, human groups were small, tightly knit communities. Only quite recently, some human groups started evolving into the large-scale societies with vast interconnected trade networks we know today. Urban areas in Mesopotamia, for example, developed around 5,000 years ago. Whether trading or purchasing goods online, many people all over the world now interact with multitudes of anonymous people on a regular basis. How did this dramatic growth happen?

Surely, many factors played a role. Agriculture, for instance, provided resources that could sustain greater numbers of people. However, over the past few years, evidence has been accumulating that religious beliefs and practices may have stimulated our willingness and ability to engage in fair, cooperative behavior with many random, anonymous people. This level of cooperation can be used to create larger social networks and societies; but it can also bring people together to engage in collective violence and conflict.

Our team of anthropologists and psychologists decided to experimentally investigate how beliefs in gods – specifically those who care about how we treat each other and punish us for immoral behavior – may have contributed to more widespread cooperation. We tested this prediction in eight different societies from around the world to see if religious beliefs might have contributed to expanding humankind’s social horizons.

What kinds of gods are keeping an eye on us? 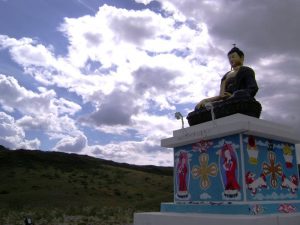 How much does Buddha in the Tyva Republic concern himself with human doings? Benjamin Grant Purzycki, CC BY-ND

Researchers have examined the relationship between “moralistic” gods – those who care about how we treat each other – cooperation and the size of human societies. This research continues to find a strong relationship between belief in such deities and social complexity. For example, the ancient Greeks appear to have appealed to Zeus during oaths, and in the Iliad, Homer attributes him with concern for justice. Along with having various deities, the Greeks also of course lived in a complex, interconnected social system.

Recent experimental research suggests that punitive, omniscient and morally concerned gods may curb selfishness because these gods trigger both the feeling of being watched and the fear of punishment for breaking the rules. Cross-cultural studies using historical or survey data have also found this relationship. But until now, no one had investigated the relationship between types of gods and selfishness directly using experimental methods with as culturally diverse participants as those in our study.

We first set out to determine what constituted a moralistic god in our field sites, which included cultures as diverse as the foraging Hadza of Tanzania, native Fijians from Yasawa, and southern Siberians from the Tyva Republic. In preliminary interviews, we asked people questions about the gods they knew about, and whether or not those gods cared about moral things like theft and deceit. We used those data as background for the next part of our study.

More for me, less for you? 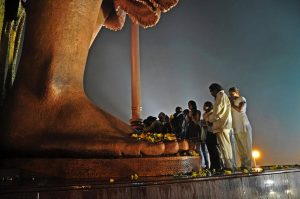 Then, we used an economic game experiment that measured rule-breaking. Here’s how the game works.

If one cup is assigned to the player, and the other is for a random person from a distant village, chances are, players would prefer their own cup since they get to walk away with whatever is in it.

There’s a 50 percent chance of putting a coin into any given cup. That’s if everyone plays by the rules. But since participants play by themselves – without anyone watching – they can put however many coins into whichever cup they want to. And they do.

In our experiment, participants played two games. The first game had a cup reserved for the player, and the other cup was for someone sharing the same beliefs and practices but who lives in a geographically distant town or village. We would expect that by and large, people would favor their own cups since they get to keep whatever money goes in. In other words, people are more likely to break the rules to give themselves more money.

The second game had one cup reserved for an anonymous person in participants’ local community, and another anonymous individual from a distant region who, again, shared similar religious beliefs and behaviors. We expected people would be more likely to put more coins into their own community’s cup rather than the cup for the far-removed region.

When all was said and done, we actually distributed the money to the appropriate recipients, and participants knew that we would do this.

Religious beliefs and fair treatment for others

We already knew from earlier studies that commitment to moralistic, punitive, and omniscient gods curbs the selfish behavior. But how far can this extend? We predicted that people who characterize their gods in this way ought to play the game more fairly than those whose gods are less punitive and not very knowledgeable about human actions.

And that’s exactly what we found: those who said their gods didn’t punish or know much about human behavior were more likely to put coins into their own cups and the cups for their local community.

These results suggest that certain religious beliefs may have contributed to the stability of expanded trade, the moderation of conflict among coreligionists, and how coreligionists might be coordinated when confronting outsiders. Belief in a moralistic, punishing god could have helped people overcome selfish behavior to cooperate fairly with more far-flung individuals, laying the groundwork for larger social networks.

Our findings also partially explain why some religions have dominated the globe; conquest, violence and conversion all require extreme levels of coordination and cooperation. Indeed, Christianity and Islam in particular often tout belief in a moralistic, punishing and omniscient deity, and these traditions have spread around the world.

Many important questions remain. For instance, how far does this effect extend? Would people treat others who have different religious convictions in the same cooperative way? And what about all the other gods who aren’t said to care about how we treat each other? Do they propel social cohesion toward different ends?

Some research suggests that religion addresses many other problems, such as resource distribution and management but there’s a lot left to untangle about religion’s role in human evolution. There’s never been a more pressing time to examine the world’s religious diversity.