Christmas tends to assume a strong sense of its own significance in times of protracted conflict.

An unusual gift, but the tale hints at how traditions bend during wartime. By the time the war broke out, the majority of Christmas traditions that we would recognise – and indeed celebrate today – were in place in America. Many of these built upon traditions from Europe. But the way these were upheld during the war went a long way towards cementing aspects of the American Christmas that has since been commercialised and exported around the globe.

Victorian-era Americans popularised Christmas trees, decorations, Christmas cards, gift giving, carol singing, and even Santa Claus. In doing so, they inaugurated holiday commercialism, transforming the American Christmas from the sacred to the secular and a celebration couched around the virtues of family life, particularly the joy of children.

Christmas tends to assume a strong sense of its own significance in times of protracted conflict. On the Civil War home front, wives, mothers and sisters greeted Christmas during the war with ominous foreboding, worrying about absent husbands, fathers and sons. Diarist Mary Boykin Chesnut offered her thoughts in verse:

Darkest of all Decembers
Ever my life has known
Sitting here by the embers
Stunned – helpless – alone. 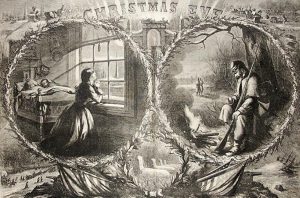 Many women, both north and south, spent their Christmases making clothes for soldiers, tending to the sick and wounded in hospitals, or preparing holiday food boxes – a gift from home that soldiers keenly anticipated.

But children felt the temper of the times more than most. Toys and decorations for many southern children were usually homemade because of the scarcity of materials and crippling wartime prices. Common gifts included various fruits and assortments of nuts, candy, popcorn and cakes. Other children were not so lucky. Confederate General Howell Cobb’s children were informed that the Yankees had shot Santa Claus.

On the front line

Usually in camp for the winter months, soldiers’ minds inevitably turned toward thoughts of home and hearth at yuletide. Men in both armies tried to replicate the family Christmas in their encampments. One Union solider stated: “In order to make it look much like Christmas as possible, a small tree was stuck up in front of our tent, decked with hard tack and pork, in lieu of cakes and oranges, etc.” 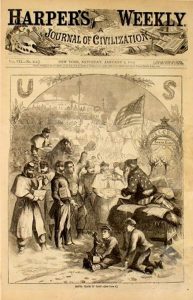 Cartoonists’ Winslow Homer and Thomas Nast’s morale-boosting sketches for Harper’s Weekly presented Union soldiers excitedly opening Christmas boxes and gifts. Nast’s famous sketch for the Christmas 1862 edition depicted a patriotic Santa, dressed in a star-spangled banner, distributing seasonal good cheer to Union soldiers from his sleigh. The image of this portly, joyful, white-bearded man carrying a bag full of gifts has since been maintained and become a central part of the international Christmas.

And there were indeed seasonal entertainments to occupy even the most forlorn of souls: parties, games, singing and dancing. Interestingly, there are some examples of seasonal fraternisation between Union and Confederate soldiers – swapping newspapers and coffee, even snowball fights – that bring to mind the famous game of football between British and German soldiers during World War I.

Soldiers huddled around campfires and reminisced of loved ones and festive repasts. But separated from their homes and families, homesickness took hold. William Downer, an imprisoned Confederate cavalryman, cut a dejected figure. “This is Christmas Eve and oh how lonely I feel,” he confessed to his diary in 1864. “The thought of home and my dear wife and children being so far away … confined in prison makes me feel as if I had not a friend on earth.”

For some enslaved African Americans, Christmas meant extra leisure time from daily routines, gifts, additional food rations, as well as relaxed restrictions on movement between plantations and farms. Convinced of their own benevolent rule, masters often permitted their enslaved peoples to attend dances, minstrel shows and tea parties – and to participate in other forms of entertainment such as boxing and wrestling competitions. “Christmas was the greatest holiday time that the slaves had,” remarked Allen Parker in his post-war reminiscence, a chronicle of his early years in servitude along the eastern coast of North Carolina through to his escape to a Union gunboat in 1862.

Of course, the day-to-day realities of antebellum slave life were scarcely as generous or bountiful as nostalgic memoirs, written many years after the events they describe, might suggest. Although Solomon Northup, a free black from New York who was kidnapped into slavery, wrote of Christmas in Twelve Years a Slave as a “time of feasting, and frolicking, and fiddling,” he also recognised that the Christmas holidays amounted to “the only days” when the enslaved were “allowed a little restricted liberty, and heartily indeed do they enjoy it”.

Some slaves insisted that the Christmas season differed little from other plantation holidays while others were threatened that Christmas would not come at all if they misbehaved. Perhaps the most heartrending exposé of a plantation Christmas during the late days of slavery came from Harriet A Jacobs. In her autobiography, Incidents in the Life of a Slave Girl (1861), Jacobs described a Christmas she spent concealed in the crawl space of her grandmother’s house after absconding from her master and his sexual advances.

Careful scrutiny of American Civil War-era letters, diaries, and reminiscences, from civilians and soldiers alike, reveal the hopes and fears of those who lived through this tumultuous period in the nation’s history. The Christmas season served as an occasion to remind mid-19th century Americans of the importance of home and its associations, of invented traditions. Therein evolved the modern Christmas.