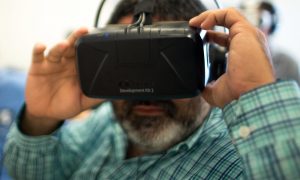 Photo from Knight Centre for Journalism, University of Texas

By Dr. Muhammad A. Ahmad / 11.09.2016
Research Scientist
University of Minnesota

You wake up, get ready for work, have some toast and coffee with your spouse, then wave goodbye. It’s your typical workday. There is, however, something unusual: your beloved has been dead for many years. You didn’t have breakfast with your spouse – but rather with a simulation of your spouse.

The simulation lives in a virtual environment, perhaps accessed by a device such as the Oculus Rift. A digital bereavement company has captured and analysed torrents of data about your husband to create a digital likeness. His voice, his gait, his idiosyncrasies and mannerisms, the undulations of his laugh – all are replicated with near-perfect similitude. Spending time with your digitally reborn spouse has become a part of your daily routine.

Death is often viewed as the great leveller that marks the cessation of experience. But perhaps this needn’t be the case. Even if the dead can’t interact with us anymore, we can still interact with a simulation of them. It was the death of my father that inspired me to embark on a project to make this fantasy a reality.

Two hundred years ago, most people didn’t have access to a picture of their dearly departed, and a few decades ago the same could be said for any film of a person. Yet, soon, simulations could be able to accurately imitate those who have died so that we can continue to interact with them as if they continued to live. As emerging technologies conspire to make simulations of the dead a part of our lives, this possibility is no longer the realm of science fiction.

With smartphones, the quantified-self movement and massive online data collection, one can get a passably accurate view of how a person behaves. This type of data collection would be the basis of creating simulations of the deceased. Humans have a natural tendency to ascribe agency – indeed personality – to animate objects, so creating a convincing simulation might not be as hard as it first seems. Consider Eliza, a computer program with a few lines of code created in the 1960s which could convince people that they were talking to a psychotherapist. And bots have been getting more sophisticated still ever since.

One immediate objection is that a simulation is never going to be as rich as the real thing. But this is akin to saying that a chess program is not going to be able to play chess in the same artful manner that a human champion does. While IBM’s Deep Blue had an exhaustive search-based chess-playing architecture that was less than elegant, it did accomplish the task of defeating the greatest chess grandmaster who ever lived.

If our hypothetical simulation can pass the deceased person’s version of the Turing test, then we have accomplished the task of having experiences of the dead. Don’t get hung up on ascribing intelligence or consciousness to the software. If the only goal is to have the experience of interacting with a person who is now deceased, then the metaphysics of personal identity is irrelevant. Will such a system have a soul? Will it be conscious? At best, these question are irrelevant and, at worst, they distract us from actually attempting to build simulations. My project focuses on making experiences of a deceased person possible – but not necessarily experiences with the deceased.

Simulations can be thought of as the next step in the evolution of bereavement. Whether it is by writing eulogies, building memorials, creating tombs or simply keeping a photograph on the nightstand, cultures have different ways of remembering and mourning – but they always do remember and mourn. One of the great appeals of religion is the promise of reunion with the departed in one form or another. Simulations hold the possibility that the living are no longer permanently cut off from the dead.

These simulations will also change how we relate to the living. Imagine if you didn’t have to say goodbye forever to anyone (that is, until you yourself die). A friend’s death would be met with bereavement and deep sadness, of course. But at any moment in the future you would still be able to spend time laughing and reminiscing with a simulation so similar to your friend that it would be difficult to tell the two apart.

At the same time, a world where you can interact freely with idealised simulations of other people could have a deleterious effect on real-world relationships. Why interact with your petulant uncle in real life when you can interact with an idealised, and much more fun, version of him in the digital world? After all, bots can be muted and their bothersome traits simply deleted. Why bother with the living if the dead can provide comfort and personality tailored to our whims?

New and unexpected patterns of behaviour might also emerge. Perhaps simulations will allow people to hold grudges even after a person has died, continuing to combat a bot that is only ever a click away. Alternatively, one might wait for the other’s demise and let go of grudges later on so that they can deal with a more pleasant version of that person. The only difference is that it will not be a person that they are interacting with but rather a simulacra.

If we don’t start a discussion about the possibility and viability of simulations of the deceased now, then they will be thrust upon us when we’re not ready for them in the near future. The road will be fraught with moral dilemmas and questions about the human condition. Soon, the line that divides the living from the dead might not be so clear.