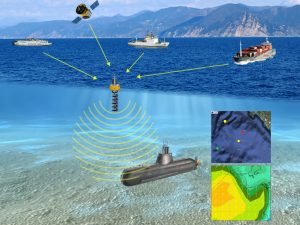 Applications of JANUS are limitless. In the operational context, CMRE has already successfully tested the delivery of Automatic Identification System AIS data, which consists of identification, position, course and speed of ships at sea and Meteorological and Oceanographic (METOC) information to underwater assets using JANUS-standardized acoustic information. Credit: NATO

Aerial and terrestrial communication methods do not work well underwater. In fact, none of the available communication protocols can be easily exported under the sea surface to work with and enhance capabilities of new robotics technologies. To address this limitation, the NATO STO Centre for Maritime Research and Experimentation (CMRE) developed a digital underwater coding standard aimed at providing a baseline common denominator for underwater acoustic communications called JANUS.

JANUS, named after the Roman God of openings and gateways, is now recognised as a NATO standard, called an STANAG, for Standardisation Agreement by all the NATO Nations. The protocol is a way of encoding information into sound simple enough that existing and new equipment can be brought into compliance with the standard relatively easily. CMRE is working to support effective underwater communication networks to allow undersea robots to work together and report back home (see the infographic below).

In practice, it works like a Lingua Franca, and it can make military and civilian, NATO and non-NATO, devices fully interoperable. As it happened with Wi-Fi protocol we use today, JANUS has the potential to leverage technological investments under the water making all compliant assets (and networks of those) able to cooperate with a robust signalling method. 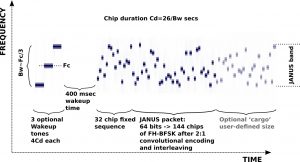 Adopted globally, JANUS aims at stopping the current underwater “Tower of Babel” between modems and systems of different manufacturers and nations. For that reason the JANUS developing process has been as inclusive as possible from the start, involving academia, industry and governmental agencies. Testing at sea have been conducted in the last several years by CMRE onboard the NATO Research Vessel Alliance, and using the innovative CMRE Littoral Ocean Observatory Network (LOON), which facilitates experimentation of marine robots’ mission-base teams by creating a monitoring acoustic network with tripods of underwater communications equipment sitting on the seabed but accessible by users across the world via web. 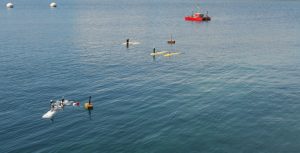 About CMRE. The NATO STO CMRE (Science and Technology Organization – Centre for Maritime Research and Experimentation) is located in La Spezia, Italy. The Centre focuses on research, innovation and technology in areas such as defence of maritime forces and installations against terrorism and piracy, secure networks, development of the common operational picture, the maritime component of expeditionary operations, mine countermeasure systems, non-lethal protection for ports and harbours, anti-submarine warfare, modelling and simulation, and marine mammal risk mitigation. 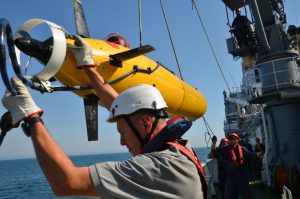 CMRE operates two ships, NATO Research Vessel Alliance, a 93-meter 3,180-ton open-ocean research vessel, and Coastal Research Vessel Leonardo, a smaller ship designed for coastal operations. In addition to its laboratories, the Centre is equipped with a fleet of autonomous underwater and surface vehicles and a world-class inventory of seagoing sensors.