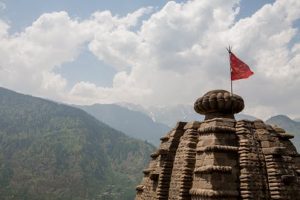 An orange flag with the traditional Indian swastika on top of ancient Hindu temples in the Himalayas. (Shutterstock)

The swastika, an ancient and innocent symbol in many cultures for hundreds of years, now represents racial hatred.

The images from Charlottesville, Va., of white supremacists marching with Nazi banners reminded us, as if we needed it, that the swastika remains a potent symbol of racist hate.

In Germany, where neo-Nazis also march, it’s illegal to display the swastika, and citizens there initiate private or neighbourhood efforts to remove it from graffiti and other street art.

But attempts to eradicate the swastika can sometimes misfire, as happened recently in Quebec. Corey Fleischer, known by the Instagram handle erasinghate, was stopped by police when he tried to blot out swastikas embossed on salvaged anchors on public display in the small St. Lawrence River community of Pointes-des-Cascades.

Plaques suggested that the anchors were from the Third Reich, but a Radio Canada correspondent reported that they were made by the English company W.L. Byers before the Nazis came to power. The company used the swastika as a symbol of good luck, a common practice in the early 20th century.

Fleischer remained unmoved by this historical explanation. As he told CityNews: “The swastika is no longer a sign of peace. It’s a sign attached to a party that literally almost wiped out an entire culture.”

I come across this obsession with swastikas time and time again. In my university courses on German cultural history, students are repelled yet fascinated by the horror it symbolizes. When I ask whether the swastika should be banned in North America the way it is in Germany, some say yes, whereas others point to its innocent use in other cultures.

The debate is similar to the dispute between Pointes-des-Cascades and Corey Fleischer. Should the 25 years it was a symbol of Nazi racism outweigh its millennia-long use as a talisman of good fortune?

A diverse and ancient history 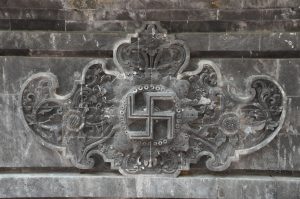 The swastika wasn’t always an odious symbol of hate. Far from it. The word svastika is Sanskrit in origin and means “conducive to well-being.”

As a symbol, the swastika’s power resides in its simplicity and balance. Graphic designer Steven Heller notes that “the swastika’s geometric purity allows for legibility at any size or distance, and when on its axis, the whirling square gives the illusion of movement.”

Its form, according to Heller, is “sublime,” so it’s no wonder that it has found a place in so many cultures.

In Buddhism, the swastika is thought to represent the footprints of the Buddha. It takes on a liturgical function in Jainism, and in Hinduism the clockwise symbol (the swastika as we know it, with the arms pointing right) and the counterclockwise symbol, the sauvistika, pair up to portray opposites such as light and darkness.

In Mesopotamia it was used on coins, and the Navajo nation wove it into blankets. It has been found on ancient pottery in Africa and Asia. It was sometimes used as a single element, but often it was repeated as a series of interlocking swastikas to form a border on a garment or in architecture, as was common in Roman times.

It made an appearance in Germanic and Viking cultures, and you can find it in medieval churches and religious vestments across Europe.

In the late 19th and early 20th centuries, the swastika became well-established in western culture as a good luck symbol, similar to a four-leaf clover or a horseshoe.

Companies used it as logo; it adorned birth announcements and greeting cards. American Boy Scouts could get a swastika badge, and the Girls’ Club published a magazine called The Swastika. Finland, Latvia and the United States have all used it as a military insignia.

In Canada, a mining community in northern Ontario was named Swastika, just as you might name a town New Hope or Bounty. Windsor, N.S., and Fernie, B.C., both had hockey teams called the Swastikas. In 1931, Newfoundland issued a $1 stamp commemorating important moments in transatlantic aviation; each corner had a swastika.

The late 19th century saw the newly formed German empire caught up in an era of unrestrained nationalism. Some nationalists sought to prove German racial superiority, subscribing to a now discredited idea that an ancient Aryan race — the original Indo-Europeans — were their ancestors. Evidence was needed to connect the Germans with the Aryans. 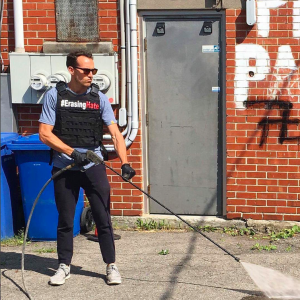 An image from the erasinghate Instagram account showing Alexander Trowbridge, a multimedia journalist, participating in one of its early events.

The swastika provided the necessary link.

In the early 1870s, when German businessman and archaeologist Heinrich Schliemann thought he had discovered the ancient Greek city of Troy, more than 1,800 instances of the swastika were unearthed. Since the swastika was also present among the archaeological remains of the Germanic tribes, it didn’t take long for nationalists to jump to the conclusion that the Germans and the Greeks were both descendants of the Aryans.

And if you believe that Germans form a separate “race” superior to other ethnic groups around it, it becomes easier to claim that you need to keep that “race” pure. In that context, anti-Semitism followed.

The Thule Society, an anti-Semitic organization promoting the superiority of German Volk (folk in English), was founded at the end of the First World War. It used a stylized swastika as its logo. The society sponsored the fledgling Nazi party, and in a bid for greater public profile, the party created a banner that incorporated the swastika as we know it today.

Hitler was convinced that a potent symbol would rally the masses to his xenophobic cause. With a black swastika (called the Hakenkreuz in German, or hooked cross) rotated 45 degrees on a white circle set against a red background, the Nazi banner modernized the ancient symbol while evoking the colours of the recently defeated German empire.

In Mein Kampf, Hitler took sole credit for the design and attempted to give it meaning: “In red we see the social idea of the movement, in white the nationalistic idea, in the swastika the mission of the struggle for the victory of the Aryan man.” Tortured symbolism aside, the swastika banner did what it was supposed to do —it gave visual identity to the Nazi movement.

When the Nazis assumed power in 1933, they sought to unite the country behind their racist Aryan ideology, and the use of their symbol infiltrated all aspects of German life.

You can still see it sometimes, including in mosaic ceiling tiles at Hitler’s Haus der Kunst in Munich. The banner became the official flag of the country in 1935, and although it wasn’t everywhere as Hollywood might have you believe, it was very much present.

Steven Heller subtitles his book, The Swastika, with a simple but pertinent question: Symbol Beyond Redemption? In those cultures where it’s been used for centuries in religious practices or in the decorative arts, this question is unnecessary. The symbol doesn’t carry any negative connotations there.

But objects like the swastika do not have any inherent meaning; the symbolism is constructed by the people who use them. In our western society, the swastika is tainted. The Nazi movement’s violent crimes against humanity gave the Hakenkreuz a meaning that can’t be concealed or erased.

In places like Pointes-des-Cascades, where pre-Nazi swastikas exist, extra care must be taken to contextualize their presence. But in all other instances the symbol really must be shunned.

Its hate-filled racist intentions are clear. It wasn’t an innocent symbol for the Nazis, nor is it for latter-day neo-Nazis and white supremacists.