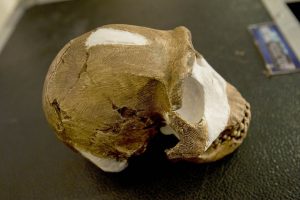 A replica of a Homo naledi skull. GCIS/Flickr, CC BY-ND 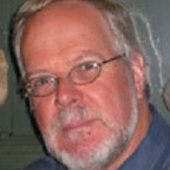 Many questions have been thrown up by the discovery in South Africa of a previously unidentified human relative, Homo naledi. Perhaps the one that’s grabbed people’s attention the most is how Homo naledi’s bones ended up in the Dinaledi Chamber in the Rising Star cave complex in the Cradle of Humankind near Johannesburg.

The team which found and classified the remains has suggested that the Homo naledi group deliberately deposited carcasses in complete darkness at the very back of the cave system. According to this claim, Homo naledi adopted a relatively “modern” or ritualistic form of behaviour even though the species had smaller brains than today’s humans.

To date, no opening has been found within the Dinaledi Chamber apart from the existing entrance. But might there have been an additional entrance at some time in the past? New research I have conducted and published in the South African Journal of Science centred on mysterious black spots found on Homo naledi bones from the cave. My findings suggest that the answer to this question may have been “yes” – there very well may have been an entrance.

I strongly believe that there was possibly a temporary entrance into the chamber, in addition to the one used by explorers today. This temporary entrance may been covered up by a rock fall that also trapped the individuals whose bones were found some time later.

Why do I believe that in fact there was this additional opening to the cave? Because those mysterious black spots are manganese dioxide and were probably deposited on the bones by lichen. And lichen need light to grow – so there must have been some light penetrating into the Dinaledi chamber. My scenario is that the Homo naledi family group was trapped in the Dinaledi Chamber after a rockfall – but that there was still, for a time, enough light to penetrate the chamber. This allowed lichen to grow on many of the bones of Homo naledi.

Then, with subsequent rockfalls in a phreatic maze, the Dinaledi Chamber was sealed except for the difficult route whereby explorers can enter the cave at the present time.

The team which discovered the remains noted that “some bones and teeth are dotted with black iron-manganese oxy-hydroxide deposits and coatings”.

I examined the remains in question and found that the spots were analogous to the kind of associated with modern lichen which are “symbionts”, including fungi – that disperse in spots – and algae, which require at least some light to grow.

The source of the manganese in the Cradle of Humankind region would include dolomite and chert. These are rock materials that date back two billion years ago, related to a shallow saline sea that existed at that time.

In the Cradle of Humankind lichen has proved to grow not only on chert, but also on dolomite. It can also grow on bone surfaces. 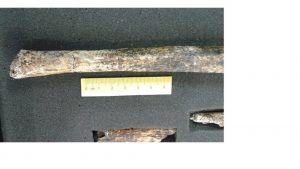 The black markings on these Homo naledi bones are manganese dioxide

Hominid cranial specimens from the nearby Sterkfontein caves have small dots or spots of manganese oxyhydroxide on surfaces of bone, even within the inner cranial wall of these skulls. It seems likely that these dots or spots of manganese oxyhydroxide may have been areas where lichens were able to grow – in a partially sunlit micro-environment – for a relatively short period of time. Then sand would have covered the crania, blocking out the light and halting the lichen’s ability to keep growing.

So what does such evidence in the Cradle of Humankind tell us about Homo naledi’s mysterious black spots?

Secrets of the caves 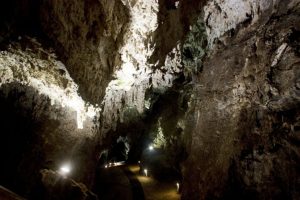 The Sterkfontein Caves in the Cradle of Humankind. MaropengSA/Flickr, CC BY

The circumstances in the Wonder Cave – which is within 10kms of the Rising Star cave complex – offer some important clues to what might have happened to create spots on the Homo naledi remains.

When one walks from the entrance of the cavern into the darkness of the dolomitic solution cavity, the following becomes obvious:

Then, in the darkness at the back of the cave where very little light penetrates, there’s a decrease in the mean size of lichens, until there is no lichen growth at all – although there may be some moisture because of water dripping through the phreatic maze of the dolomitic cave system.

All of this suggests that, for the Homo naledi bones in the Rising Star cave to have become spotted with manganese dioxide, they had to have some exposure to light. That could only have happened if light got into the cave. And this was only possible if there was some sort of entrance that has, in the distant past, been covered over. If correct, this would contradict the original team’s proposal that, in prehistory, the Dinaledi Chamber could only be accessed by means of very narrow and circuitous passages, in complete darkness.

Based on my findings I believe that there was, at some time, a second entrance to the Dinaledi Chamber. This allowed at least some light to penetrate into the cave and to facilitate the growth of lichen and the subsequent deposition of manganese oxyhydroxide on the Homo naledi bones.

I’d further hypothesise that such an entrance, if it existed at all, was temporary. A rockfall in the maze cave system may have subsequently sealed the entrance at some stage in the dolomitic solution cavity. The darkness that settled over the cave would have terminated any lichen growth.

If there was more than one entrance into the Dinaledi Chamber, as suggested by my work and research conducted by Dr Aurore Val, the “intentional depositional model” will need to be reassessed. It would seem unlikely that the Homo naledi group deliberately deposited or buried its dead.