In 1900, just 1% of young people in the world were enrolled at university. Over the course of the next century this exploded to 20%, as recognition of the value of such an education became widespread. And it turns out that the expansion of higher education from 1950 onwards was not just the product of growing wealth, it has also helped fuel economic growth around the world.

These were the findings of my recent paper with colleague John van Reenen, which analysed new data from UNESCO’s World Higher Education Database of 15,000 universities across 78 countries. We examined the relationship between new universities and regional growth between 1950 and 2010.

In the UK, recent policies for universities have been hotly debated. While some argue that there are now too many universities and graduates, there is a Higher Education and Research Bill being pushed through parliament, which includes measures to encourage entry into the sector, in order to foster growth and social mobility.

Brexit, meanwhile, poses major risks to the university system. The potential impact on EU students, academics, research funding and cross-border collaboration – all of which have arguably been important for the success of world class British universities and their economic contribution – is huge.

The value of human capital

In our analysis, we focus on the period since 1950 when university growth took off. University expansion accelerated in a number of countries around the world; a trend partially driven by the view that higher education is essential for economic and social progress. Many might take this view for granted today, but before World War II, fears among national elites of the wider population becoming “over-educated” were widespread. 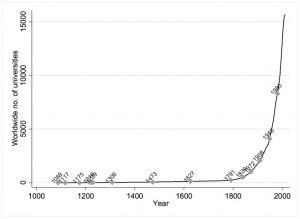 The global growth of universities over the last 1,000 years. Anna Valero

There is ample evidence that higher education pays off for the individual as wages of graduates are much higher than those of non-graduates. At a national level, human capital (typically measured by years of schooling) is generally regarded to be important for development and growth. But proving this link is difficult as there are many factors to control for. At the sub-national level – where you can hold country-specific factors constant – researchers have shown that human capital helps boost regional GDP per capita and growth.

Over and above their role as producers of human capital, universities help growth in a number of other ways. They boost innovation in their surrounding region (such as Silicon Valley), they help institutions develop (for example, as platforms for democratic dialogue), and their very presence has a direct economic effect, as they are big purchasers of goods and services from the regions they are located in.

Our analysis of data at the regional level (such as individual states in the US) showed that increases in university numbers significantly raised future GDP per capita: doubling the number of universities in a region raises its future GDP per capita by about 4%. We found that this relationship cannot simply be explained by “reverse causality” – i.e. that faster growing regions simply open up more universities.

Universities also increase output in neighbouring areas within the same country, with stronger effects for geographically closer regions. Doubling the universities in one region increases that region’s income by 4% and country-wide income by 0.5%. 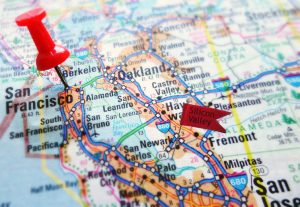 Policymakers are not only interested in the potential benefits of universities, but also in the costs of building and maintaining them. In the UK we estimate that if one university were added to each of its ten regions this would lead to about 0.7% higher national income (£11.3 billion based on 2010 figures). This is higher than the likely annual cost, which, based on average university expenditure, is more like £1.6 billion. The large margin between benefits and costs suggests university expansion is beneficial.

A cynic might claim that universities affect growth in a mechanical way: more people move to the region and consume more there – housing, food and beer spring to mind. But our results show it’s not a simple matter of population growth boosting economic growth. Even if universities bring with them a great deal of public money for spending in the local area, we found that this is not the main way that they boost growth in a region.

The university effect does seem to be related to increasing the supply of skilled graduates who raise productivity in the firms they work in. We also find that universities boost innovation (as measured by an increase in patenting).

Over a longer time frame, we find that higher university presence in a region is also associated with pro-democracy views among the people there. And this is not just among students or graduates, which suggests that there could be some kind of knock-on effect associated with universities through the diffusion of ideas into their surrounding areas.

The benefits of universities to the economy therefore seem to significantly outweigh the costs. That’s been our finding in the UK, which adds to a lot of international data since the 1950s which shows that universities matter for growth.

Assuming that any new universities have the same qualities as those we already have, policies to encourage entry to the sector would be good for growth. UK universities have thrived in recent decades in a climate of openness to international students, academics and collaboration all of which will have contributed to the economy through skilled employees and innovations. It is important that whatever Brexit deal we end up with preserves these key strengths.