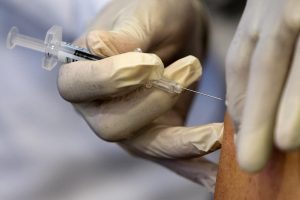 Nurse B.K. Morris gives a flu shot to Winifred Quinn during a press event on the flu vaccine, Thursday, Sept. 17, 2015, at the National Press Club in Washington. (AP Photo/Jacquelyn Martin) 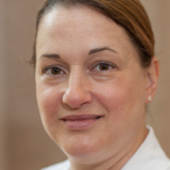 Researchers believe that over 50 million people worldwide died in the 1918 flu pandemic, making it possibly worse than even the Black Death that began in the 14th century.

Could another catastrophic pandemic like the 1918 pandemic occur again? Yes, unless we protect ourselves better. To do that, we should emphasize high compliance with the flu vaccines that are currently available while we pursue the longer-term goal of a better vaccine.

I am a board-certified infectious disease physician as well as the epidemiologist at Shands Medical Center at the University of Florida. I have seen the ravages of flu firsthand as well as studied and quantified outbreaks. If vaccines had been available in 1918, there is no doubt that the death toll would have been lower.

The flu past and present

Influenza has been infecting humans for thousands of years. It was described by Hippocrates as early as 412 B.C. While the symptoms of influenza and the common cold overlap – including cough, fever, runny nose, headache and body aches – influenza is more severe.

People whose immune systems are compromised, pregnant women and people aged 65 and older are at particularly high risk for complications from influenza. This includes respiratory failure and death. Usually, the mortality rate is about 0.1 percent. While this doesn’t sound like much, multiply it by hundreds of thousands of infections every year, and the death toll mounts up.

In 1918, the death toll was exceptionally high, at about 2.5 percent. When the 1918 virus was reconstructed from influenza victims buried in the Alaskan permafrost, we scientists gained some insight into why: The reconstructed virus harbored mutations that enabled it to bind to cells deep in the lungs, causing a viral pneumonia. That is distinct from the less serious upper airway infection that flu usually causes. 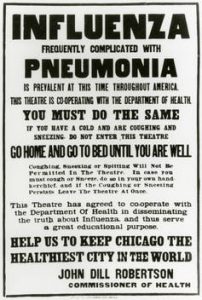 However, the 1918 virus was similar to other flu strains with regards to its propensity to cause a well-known complication of influenza called “post-influenza bacterial pneumonia,” or PIBP. The thinking is that damage to the lining of the respiratory tract caused by influenza renders a person susceptible to secondary infection by bacteria. In fact, most influenza-associated deaths that occur during normal flu seasons are caused by PIBP.

Death from PIBP continues to be an important driver of influenza-related mortality. Therefore, prevention is key. Vaccination is a crucial component of prevention efforts, and is recommended by the Centers for Disease Control and Prevention for all individuals 6 months of age and older.

However, only about half of all eligible people get the flu shot. Two misconceptions contribute to low vaccination rates: that the vaccine causes influenza and that the vaccine doesn’t work.

The first misconception is easy to dispel. The influenza shot contains only a virus that has been killed, or inactivated. There is no live virus in the vaccine that could cause infection. It’s as simple as that. You can’t catch flu from a dead virus.

Some people will still insist that they came down with the flu because of the vaccine. Confusion may occur if you are vaccinated and then develop influenza a few days later. Here’s why.

You can develop flu after you receive the vaccination, but that doesn’t mean the vaccine gave you influenza. Instead, it means you were already infected with influenza when you were vaccinated. Typically, your body needs about two weeks for the immune response to develop after a flu shot.

Since a person can transmit influenza 24 hours before symptoms begin, you may not realize from whom you caught it, because that person may have appeared healthy.

Challenges of making an effective vaccine

A second misconception about the shot “not working” stems from an overly broad extrapolation of “vaccine efficacy” studies. These are designed to approximate how many influenza infections are prevented by vaccination. However, vaccine efficacy studies don’t tell us how sick a vaccinated person may be.

Many studies show that vaccination decreases the severity of influenza as well as influenza-related complications. This is an enormous benefit.

People also misconstrue concerns in the efficacy studies about the difference among influenza subtypes.

There are four main influenza subtypes that infect humans. Two are dubbed “flu A.” They are defined by key proteins, called hemagglutinin (“H”) and neuraminidase (“N”), found on their surfaces. The influenza A subtypes that cause most infections are subtypes H3N2, the prevalent subtype this year, and H1N1.

There are also two influenza B subtypes. They are called Yamagata and Victoria.

Every spring, scientists and public health officials from around the world meet to determine the vaccine formulation for the coming year, based on what they know about the strains that are circulating at that time.

Each influenza vaccine will contain both influenza A strains and one or both of the influenza B strains, depending on whether you receive a formulation with three strains or one with four strains. Efficacy can change each year because flu viruses are constantly mutating, so that the viruses causing infections might be quite different from the vaccine strains chosen months earlier.

For example, over the past few years, the efficacy for vaccine for H1N1 and the B strains has been 40-60 percent. Efficacy for H3N2, however, has been lower, probably because it seems more prone to mutation.

While H3N2 is the predominant strain this season, one in four people who develop influenza will be infected with H1N1, Yamagata or Victoria. Efficacy is historically relatively high for the H1N1 vaccine. Therefore, people who are exposed to that strain but have received a flu shot would have a greater likelihood of being protected.

People, who are eligible for the influenza shot but choose to skip it, unnecessarily place themselves at increased risk for acquiring any of the four influenza strains or for a more severe disease if they do contract influenza. They also endanger others around them by potentially transmitting the infection.

Why doesn’t influenza vaccine efficacy exceed 60 percent? Vaccination against other diseases like measles or tetanus yields efficacy of 90 percent that lasts many years. The problem with influenza is its propensity to mutate, such that the strains causing disease this year are a bit different from last year’s.

When these changes occur in key viral sites such as in hemagglutinin, our immune system doesn’t recognize the mutated virus as well, and efficacy declines. Significant mutation can occur within a season too, as happened during 2014. Initially, the H3N2 vaccine strain chosen for the vaccine in February 2014 was well-matched to circulating strains, but by October of that year, H3N2 with mutated hemagglutinin had emerged and was different enough such that H3N2 efficacy declined to 17 percent.

While people tend to think of influenza as a wintertime disease, since it usually peaks sometime between December and February in the Northern Hemisphere, flu is around all year. The year-round presence of influenza viruses amplifies the chance that mutations will accumulate. This leads not only to reduced efficacy but also increased potential for a pandemic.

This problem could be solved if we could engineer a vaccine that stimulated an immune response against a region of the virus that was less prone to mutation. It would be even better if this viral target were common to all influenza strains. Such a “universal vaccine” is the Holy Grail of influenza research.

There are early-stage trials going on right now. If we are to prevent another catastrophe like the 1918 influenza pandemic, we must continue to support research efforts aimed at developing a universal influenza vaccine.