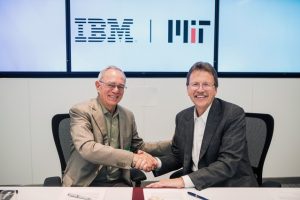 IBM and MIT today announced that IBM plans to make a 10-year, $240 million investment to create the MIT–IBM Watson AI Lab in partnership with MIT. The lab will carry out fundamental artificial intelligence (AI) research and seek to propel scientific breakthroughs that unlock the potential of AI. The collaboration aims to advance AI hardware, software, and algorithms related to deep learning and other areas; increase AI’s impact on industries, such as health care and cybersecurity; and explore the economic and ethical implications of AI on society. IBM’s $240 million investment in the lab will support research by IBM and MIT scientists.

The new lab will be one of the largest long-term university-industry AI collaborations to date, mobilizing the talent of more than 100 AI scientists, professors, and students to pursue joint research at IBM’s Research Lab in Cambridge, Massachusetts — co-located with the IBM Watson Health and IBM Security headquarters in Kendall Square — and on the neighboring MIT campus.

The lab will be co-chaired by Dario Gil, IBM Research VP of AI and IBM Q, and Anantha P. Chandrakasan, dean of MIT’s School of Engineering. (Read a related Q&A with Chandrakasan.) IBM and MIT plan to issue a call for proposals to MIT researchers and IBM scientists to submit their ideas for joint research to push the boundaries in AI science and technology in several areas, including:

In addition to IBM’s plan to produce innovations that advance the frontiers of AI, a distinct objective of the new lab is to encourage MIT faculty and students to launch companies that will focus on commercializing AI inventions and technologies that are developed at the lab. The lab’s scientists also will publish their work, contribute to the release of open source material, and foster an adherence to the ethical application of AI.

“The field of artificial intelligence has experienced incredible growth and progress over the past decade. Yet today’s AI systems, as remarkable as they are, will require new innovations to tackle increasingly difficult real-world problems to improve our work and lives,” says John Kelly III, IBM senior vice president, Cognitive Solutions and Research. “The extremely broad and deep technical capabilities and talent at MIT and IBM are unmatched, and will lead the field of AI for at least the next decade.”

“I am delighted by this new collaboration,” MIT President L. Rafael Reif says. “True breakthroughs are often the result of fresh thinking inspired by new kinds of research teams. The combined MIT and IBM talent dedicated to this new effort will bring formidable power to a field with staggering potential to advance knowledge and help solve important challenges.”

Both MIT and IBM have been pioneers in artificial intelligence research, and the new AI lab builds on a decades-long research relationship between the two. In 2016, IBM Research announced a multiyear collaboration with MIT’s Department of Brain and Cognitive Sciences to advance the scientific field of machine vision, a core aspect of artificial intelligence. The collaboration has brought together leading brain, cognitive, and computer scientists to conduct research in the field of unsupervised machine understanding of audio-visual streams of data, using insights from next-generation models of the brain to inform advances in machine vision. In addition, IBM and the Broad Institute of MIT and Harvard have established a five-year, $50 million research collaboration on AI and genomics.

MIT researchers were among those who helped coin and popularize the very phrase “artificial intelligence” in the 1950s. MIT pushed several major advances in the subsequent decades, from neural networks to data encryption to quantum computing to crowdsourcing. Marvin Minsky, a founder of the discipline, collaborated on building the first artificial neural network and he, along with Seymour Papert, advanced learning algorithms. Currently, the Computer Science and Artificial Intelligence Laboratory, the Media Lab, the Department of Brain and Cognitive Sciences, and the MIT Institute for Data, Systems, and Society serve as connected hubs for AI and related research at MIT.

For more than 20 years, IBM has explored the application of AI across many areas and industries. IBM researchers invented and built Watson, which is a cloud-based AI platform being used by businesses, developers, and universities to fight cancer, improve classroom learning, minimize pollution, enhance agriculture and oil and gas exploration, better manage financial investments, and much more. Today, IBM scientists across the globe are working on fundamental advances in AI algorithms, science and technology that will pave the way for the next generation of artificially intelligent systems.