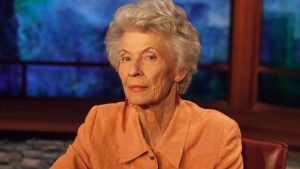 Joyce Oldham Appleby was born in Nebraska on April 9, 1929. After a rootless childhood that involved a number of moves from Illinois to California (and a number of places in between), Appleby attended Stanford University, where she received her BA in History in 1950. After spending a few years working as a writer for Mademoiselle in New York City, she returned to California and subsequently decided to pursue graduate study in history. Following an MA at UC-Santa Barbara, Appleby went on to complete her PhD at Claremont Graduate University in 1966 with a dissertation entitled, “An American in Paris: The Career of an American Pamphlet in French Revolutionary Politics, 1787-89.” In 1968, after a year abroad in Paris with her family, which, by now, included three children, Appleby published her first article in the American Historical Review, “The Jefferson-Adams Rupture and the First French Translation of John Adams’ Defence,” and accepted a job at San Diego State University.

In 1973, Appleby published another article in the American Quarterly, “The New Republican Synthesis and the Changing Political Ideas of John Adams.” She went on to play a key role in the predominant debate over American revolutionary ideology for the next two decades, including prominent articles published in the American Historical Review, Journal of American History, the William and Mary Quarterly, and the American Quarterly, among others. While at San Diego State, she published her first book, Ideology and Economic Thought in Seventeenth-Century England (Princeton: Princeton University Press, 1978), which examined the themes that would define much of the rest of her life’s work. The book was awarded the Berkshire Prize in 1978, which was followed a few years later by her move to UCLA in 1981.

In 1984, Appleby published her second book, Capitalism and a New Social Order: The Republican Vision of the 1790s. Derived from her 1982 Anson Phelps Lectures at New York University, this slim volume, like a number of her articles, offered an important alternative to previous understandings of the ideas behind Jeffersonian political economy. During the 1980s, she published seven articles in major journals, most focusing on the relationship between republicanism and liberalism and their relationship to economic thought. In 1990, she became the second woman selected to serve as the Harmsworth Professor of American History at Oxford University. The following year her inaugural lecture at Oxford—”Without Resolution: The Jeffersonian Tension in American Nationalism,”—was published by the university’s press. In 1992, her influential articles were compiled into a volume by Harvard University Press entitled, Liberalism and Republicanism in the Historical Imagination.

As a highly respected senior member of the field, Appleby spent much of the 1990s thinking and writing about historical practice, particularly the implications of postmodernism, and serving the field in a number of ways. She served as the President of the Organization of American Historians in 1991-92. In 1994, she co-authored Telling the Truth about History (New York: Norton, 1994) with Lynn Hunt and Margaret Jacob. She also co-edited a volume entitled, Knowledge and Postmodernism in Historical Perspective (New York: Routledge, 1996). In 1996, she helped establish the History News Service with James M. Banner to “encourage more historians to bring their knowledge to bear on public affairs,” which she did by playing a public role in the fight over National History Standards with her UCLA colleague, Gary Nash. The following year, she served as the President of the American Historical Association and did the same for the Society for Historians of the Early American Republic in 1999. Following the turn of the millennium, Appleby published Inheriting the Revolution: The First Generation of Americans (Cambridge: Harvard University Press, 2000).

Despite officially retiring in 2001, she continued to play a prominent role as a public intellectual by writing numerous op-ed pieces throughout the decade, particularly in the Los Angeles Times. She also regularly offered Gilder Lehrman seminars aimed at K-12 teachers. In 2007, another collection of her essays was published under the title, A Restless Past: History and the American Public (Lanham: Rowman & Littlefield, 2007). In 2010, she published The Relentless Revolution: A History of Capitalism (New York: W. W. Norton & Company, 2010), which argued for a non-teleological understanding of capitalism as a cultural system (see her interview about the book for the New Books Network: here). This was followed in 2013 by her final book, Shores of Knowledge: New World Discoveries and the Scientific Imagination (New York: W. W. Norton & Company, 2013), which explored the role of curiosity in the development of early modern Europe and early America.

Appleby passed away on December 23, 2016 at the age of 87. It is a testament to her achievements as a historian and her contributions to our understanding of early America that one could easily point to both multiple books and multiple articles of hers as necessary inclusions in any early American history orals reading list. Moreover, the messages of condolence and appreciation now circulating are a testament to her enduring impact on the field.