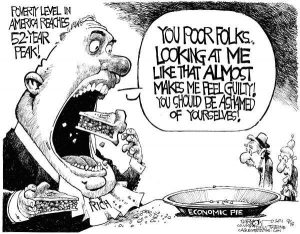 In January 2016, Oxfam reported a major increase in global inequality, with just sixty-two people owning as much wealth as 3.5 billion people in the lower half of the world’s income scale. Inequality is inherent in capitalism, where those who are smarter or were born into the right family or work harder or take more risks can accumulate wealth and enjoy its benefits. Most people accept that individuals who have greater responsibility or perform at higher levels or are more valuable to society should receive more compensation than their peers. Yet there are limits to how much inequality is acceptable in any society. This is particularly so if some of the acquisition of wealth is perceived to have been accomplished in an inappropriate or immoral fashion. Some of the most affluent may also showcase their money in ways that provoke anger along with envy in those less fortunate. They may also use their money to buy political power, corrupting politicians and elected officials.

An important consideration in reducing inequality is how to curb generational conveyance of wealth. If this is not addressed, an increasing concentration of a nation’s (and the world’s) assets will be possessed by a smaller number of families, which can be passed on indefinitely and employed to amass power, either directly or indirectly. For democratic societies to survive and flourish, equality of opportunity and meritocracy must be maintained, rather than control of the state and its institutions by inherited wealth.

Over the last quarter-century, with marginal tax rates lowered, financial rewards from the performance of the American economy have gone disproportionately to the most affluent, while little has filtered down to the middle- and lower-income strata. The Walton family alone had more wealth than 42 percent of American families. Still, the American dream remains ingrained in society; that intelligence and individual effort can result in upward mobility and people can reach the top through hard work.

The continued growth of inequality has only accelerated since the recovery from the recession of 2007-2008. To some degree, uninformed citizens voting against their own interests played a role. Globalization, computerization, and the loss of well-paying manufacturing jobs have also contributed. As noted in the Harvard Business Review, the huge rise in economic inequality has been the result of technological changes and political decisions including financial market reregulation, free trade, tax code changes, and various other policy choices.

Another factor often overlooked in burgeoning inequality has been assortive mating- the tendency for successful men and women to marry one another. Lawyers are more likely to marry other lawyers or other high-income professionals, as are physicians, business executives, and so forth. Thus, these families earn more and greater wealth is concentrated in their hands.

Currently, a small number of individuals control inordinate amounts of wealth in most democracies. In the United States, the ultra-rich 0.01% of the populace was reported to have 11.1% of the nation’s wealth in 2014, with the top 1% having 39.8% of the wealth, an astounding $32.6 trillion. These statistics do not consider assets held in offshore accounts which would skew the percentages even further. The upper 1 percent earns nearly a quarter of the nation’s income annually.

The richest 0.01% has quadrupled their share of America’s wealth since 1980, a time when they were already quite affluent. In fact, according to Forbes, the richest four hundred Americans alone were worth an unbelievable $2.29 trillion in 2013, increased by $270 billion from the previous year. To a major degree, government policy which voters have allowed has been responsible for the affluent being able to accumulate this immensely unequal share of assets, while the middle class has stagnated financially and poverty appears Moneybags to be intractable. Income inequality in the U.S. is greater than in any other nation in the developed world by a large percentage. Economist and Nobel Prize winner Joseph Stiglitz has said that “America’s inequality distorts our society in every conceivable way.”

And wealth creates wealth. The more disposable income and excess capital an individual possesses, the more extra money he or she can accrue through investments. Then, that additional surplus money can be reinvested along with the original sums, creating greater and greater wealth for that person and his or her family. This is not necessarily bad for society, creating more businesses, jobs and so forth. But limits must somehow be set. To a certain degree in democracies, many of the ultra-rich have achieved the same status nobility were accorded in feudal societies, living in castles with servants and bodyguards, their every desire gratified.

Thomas Piketty in his book Capital in the 21st Century noted- “When the rate of return on capital exceeds the rate of growth of output and income, as it did in the 19th century and seems quite likely to do again in the 21st, capitalism generates arbitrary and unsustainable inequalities that radically undermine the meritocratic values on which democratic societies are based. There are nevertheless ways democracy can regain control over capitalism and insure that the general interest takes precedence over private interests, while preserving economic openness and avoiding protectionist and nationalist reactions.” Thus, one of the major objectives of democratic societies must be achieving in a rational fashion the lessening of the concentration of wealth in only a few hands.

In 2005, the most affluent 300,000 Americans made as much as the bottom 150 million. The income gap was almost double that existing in 1980. The growth in income for top corporate executives and the excessive compensation going to investment bankers and financiers have been responsible for much of the inequality. A chief executive at one of the leading one hundred corporations in America in 1977 made about fifty times the pay of its average worker. Thirty years later, these CEOs made about 1100 times the wages of an average employee.

Though the financial industry, the energy sector, and high-tech companies, had the largest annual payouts for their officers, virtually all corporations have been rewarding their major executives with increasingly high salaries. But the financial industry provided the highest salaries by far. Wall Street pay broke a record in both 2009 and 2010 in spite of the damage these firms had done to the economy and the need for government bailouts. Financial firms in 1984 generated about one-seventh of the profits of all businesses in the US. By 2009, it was more than a quarter and had been as high as a third at the height of the boom in 2006.

While compensation for CEOs was once supposed to be tied to company performance, this idea has been mostly abandoned. In good times and bad times, executive compensation keeps rising, even while many of these corporations slash pensions and health care benefits, lay off workers, and sometimes flirt with bankruptcy.

Though there have always been differences in wealth and standards of living among US citizens, those who struggled were sustained with the belief that America was a meritocracy and that anyone could rise to the top. Whether this perception was valid does not matter, as it infused Americans with optimism about their ability to transcend origins and status to realize whatever their dreams might be. This is in the process of changing (aside from high-tech savants) as an aristocracy of wealth is developing, its members having the power and ability to shape the world to fit their needs and expectations. Whether a more equal distribution of wealth can ever be attained depends on the voters and who they choose to represent them.