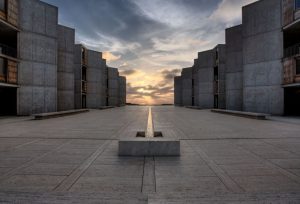 The dramatic window walls at Louis Kahn’s icon of modern architecture were beset by problems. Following years of research, the windows—and the entire complex—will now be preserved for the future.

The Salk Institute for Biological Studies in La Jolla is one of the most architecturally significant buildings in California. The setting alone is spectacular—the institute sits on a bluff overlooking the Pacific Ocean, on a 27-acre parcel gifted to Dr. Jonas Salk by the City of San Diego in 1960. Salk, the developer of the polio vaccine, wished to create “a collaborative environment where researchers could explore the basic principles of life and contemplate the wider implications of their discoveries for the future of humanity.”

Salk turned to American architect Louis I. Kahn to help him realize his vision for his newly established institute. Kahn’s design, completed in 1965 and widely considered a masterpiece of modern architecture, consists of two nearly identical wings of laboratory, study, and office space mirroring each other on either side of a central plaza. The entire complex was built with limited palette of materials, including concrete, teak, glass, travertine, lead, and steel. With a stream of water flowing down the middle of the plaza and the ocean breeze, the site is a meditative, serene place to carry out important medical research. 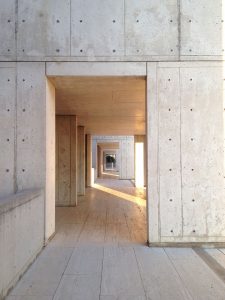 A view of the arcade beneath the north study towers of the Salk Institute. Photo © J. Paul Getty Trust. All rights reserved

However, like many modern buildings entering their sixth decade, the Salk is showing some signs of age.

As a project manager in the Getty Conservation Institute’s Buildings and Sites department, I have had the incredible opportunity to collaborate with staff at the Salk on a project that addresses the aging and long-term care of one of the site’s distinctive features—the teak window wall assemblies, which are set within the monumental concrete walls. After fifty years in an exposed marine environment, the window walls have weathered to a non-uniform appearance and are deteriorated. 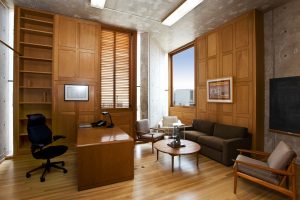 View of the window walls from a study interior. Photo © Salk Institute for Biological Studies. All rights reserved

The 203 teak window walls are significant elements of the overall site, and express a human element and scale within the structure. Even though they are prefabricated, each window has a hand-crafted quality due to the detailing of the teak wood by carpenters and customization to fit many sized openings. Each offers a different combination of sliding windows, louvers, and shutters, allowing staff to control light and air in their workspaces.

The window walls are also significant in Kahn’s larger body of work, as they expand upon his office’s language of custom exterior woodwork, which he used in several residential projects and the library at Phillips Exeter Academy in New Hampshire. 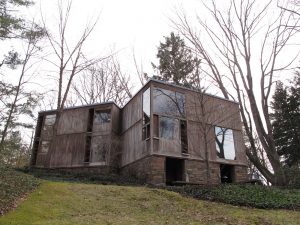 Our research found that the window walls at the Salk Institute suffered from several problems: surface erosion, the growth of a fungal biofilm (likely spread by nearby eucalyptus trees) that gave the wood a black appearance, changes to the teak’s color due to previously applied sealers and finishes, insect infestation, and moisture infiltration due to the omission of flashings and weather stripping and the failure of sealants. As you can see, there were many challenges to sort out before we could find our way toward a solution. 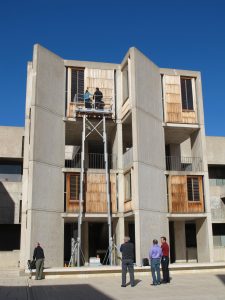 To get to the bottom of these issues, the Getty Conservation Institute and our consultants engaged in historical research, including visiting the Kahn archives and collecting oral histories, to better understand the significance of the window walls and Kahn’s original vision for the site. We explored the extent of the damage to the window walls and performed physical and laboratory analysis to identify the materials used and the various causes of damage and deterioration.

The Conservation Institute also convened a meeting of Salk representatives, other Kahn building owners with similar wood conservation issues, and preservation professionals. We also researched possible treatments for the wood and wood replacement options, as well as modifications that could be made to the design to improve the overall performance of the assemblies. 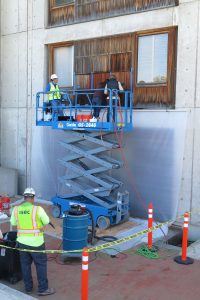 Drawing on the results of the project team’s earlier research and the trial mock-ups, WJE has developed comprehensive construction plans to repair and conserve the window walls. The work ranges from minor (cleaning and repair), to moderate (cleaning, repair, and some replacement of materials), to major (removal of the entire window assembly where severely deteriorated, and replacement using like-for-like materials). The work is underway and will be completed in 2017.

In addition to the Conservation Institute’s work on the project, the Getty Foundation provided a grant through its Keeping It Modern initiative to create an overall Conservation Management Plan for the site. This will ensure that future maintenance is in step with the site’s conservation needs. These commitments mean a bright future for one of the West Coast’s icons of modern architecture. 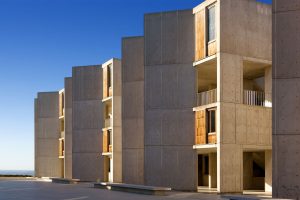