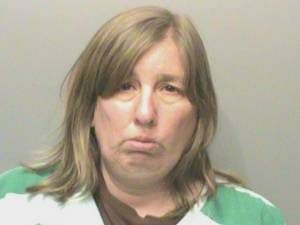 Donald Trump has repeatedly accused Democrats of rigging the election against him, but it turns out his own supporters are doing everything they can to rig it in his favor.

And that includes voting twice, something Republicans continually claim that Democratic voters always get away with doing.

Terri Lynn Rote, 55, was booked into the Polk County Jail about 3:40 p.m. Thursday on a first-degree election misconduct charge, which is a Class D felony.

Rote, a registered Republican, reportedly cast an early voting ballot at the Polk County Election Office, 120 Second Ave., and another ballot at a county satellite voting location in Des Moines, according to a Des Moines police report.

So just to recap, Rote literally committed voter fraud in a desperate attempt to get Trump and the Republican Party an extra vote in this election.

That’s the precise definition of election rigging, but you won’t hear Trump say anything about this because he thinks that Democrats are the ones committing voter fraud, which is why he has called for his supporters to intimidate minority voters at polling places.

But this incident is far from the only time during this election that a Republican has been caught trying to rig the election.

A Wisconsin city clerk was recently busted for trying to deny an extra polling place near the University of Wisconsin-Green Bay because she argued in an email that students lean Democratic.

“I was reading the statutes and read: No site may be designated that affords an advantage to any political party,” Kris Teske wrote.

“UWGB is a polling location for students and residents on Election Day but I feel by asking for this to be the site for early voting is encouraging the students to vote more than benefiting the city as a whole. I have heard it said that students lean more toward the democrats and he is a democrat. I have spoken with our Chief of Staff and others at City Hall and they agree that budget wise this isn’t going to happen. I would like to know your thoughts on this. Do I have an argument about it being more of a benefit to the democrats.”

Imagine if a Democratic clerk denied letting a church be a polling place on the premise that most religious people are Republicans. The outrage and whining would last for days.

And a right-wing group is literally creating fake badges so they can infiltrate polling places in order to intimidate voters on Election Day. Keep in mind that Republicans often accuse Democratic voters of using fake IDs to vote multiple times, but here’s a right-wing group making fake IDs so they can use voter suppression tactics to swing the vote in favor of Trump.

Thus far, it appears that only Donald Trump’s supporters are trying to rig the election, not Democrats as he so often claims. And just think, there are still ten days left until Election Day. Still plenty of time for even more hypocritical Trump supporters to be caught trying to rig the election for the small-handed man who whines about how unfair our democratic system is.