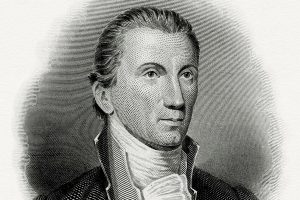 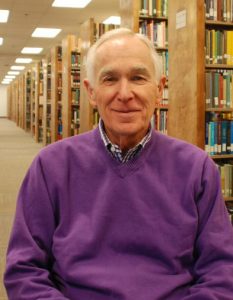 Some Founding Fathers, like John Dickinson, supported the colonists’ insurgency, but not independence. Some favored independence, but with little change in America’s social and political fabric. Still others, like Alexander Hamilton, who in 1776 referred to England as an “old wrinkled, withered, worn-out hag,” thought they wanted America changed until changes began to occur, and thereafter they sought to erect barriers to make it difficult to bring about further change. But some revolutionaries wished to break with England not only because they believed its rule was tyrannical, but because they longed for transformative changes in America that would never come about so long as the colonies remained within the British Empire.

Thomas Paine, Thomas Jefferson, and James Monroe fell into the latter category. James Monroe? Paine’s and Jefferson’s bona fides as radicals are well established. Both burst on the national scene in 1776, Paine with Common Sense– which painted the American Revolution as the “birthday of a new world” – and Jefferson with his lyrical Declaration of Independence that argued for egalitarianism and natural rights. Through a string of publications, most of which teemed with radical messages, Paine likely was the world’s most widely read author in the last quarter of the eighteenth century. Meanwhile, Jefferson campaigned for myriad reforms within Virginia. Both Paine and Jefferson believed the American Revolution inspired the revolution in France in 1789, and both were involved in that upheaval, an involvement that resulted in Paine’s incarceration, and nearly his death, during the Reign of Terror. 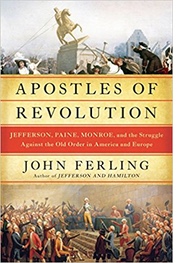 What was James Monroe doing throughout this period that could lead him to be considered a radical? He was an eighteen year old college student in 1776 – twenty-one years younger than Paine and fifteen years the junior of Jefferson – and not a player on either the provincial or national stage. Today, many might be unaware of his involvement in the Revolution. Like Hamilton, Monroe abandoned his studies and served in the Continental army. He saw action on the Chesapeake during that summer and was repeatedly in harm’s way during the New York campaign and George Washington’s November retreat across New Jersey. While Paine in Philadelphia was writing his famous first installment of The American Crisis and Jefferson was residing at Monticello, Monroe was seriously wounded in the first Battle of Trenton, taking a ball through his breast and shoulder, a ghastly wound that severed an artery.

Following a lengthy convalescence, Monroe returned to soldiering. He fought in the Battles of Brandywine and Monmouth, and spent the winter of 1778 with the Continental Army at Valley Forge. During the long, often painful, months in that encampment, Monroe became close friends with Pierre S. Du Ponceau, a young Frenchman who had also abandoned his studies to serve in the American war and who came to Valley Forge as the aide-de-camp to Friedrich Steuben. Du Ponceau spoke fluent English and was surpassingly amiable, and his relationship with Monroe was so close that the two exchanged letters on days when they did not see one another. Du Ponceau was well-grounded in the Enlightenment, and through his tutelage Monroe’s radical outlook galvanized.

A bit later, Monroe’s education continued under Jefferson. Unable to obtain a field command, Monroe left the army and not only studied law with Jefferson, but undertook several dangerous missions during his mentor’s two years as Virginia’s wartime governor. Following the war, the two served together in Congress and shared a residence until Jefferson, in 1784, departed for France. Monroe had become such a thorough Jeffersonian that during the ratification battle over the proposed Constitution he expressed largely the same reservations that – unbeknownst to him – Jefferson in Paris made on first glimpsing the document.

Monroe was elected to the U.S. Senate in 1790 and, like Jefferson, opposed Hamilton’s economic program. Monroe, too, feared that in time Hamiltonianism would unravel the progressive changes ushered in by the American Revolution, refashioning the United States along the lines of England, a monarchical and oligarchical nation that seemed to be constantly at war. But it was the French Revolution, and in particular hostilities between France and England that erupted in 1793, that led Monroe’s radicalism to shine through.

Most Americans, regardless of political affiliations, initially supported the French Revolution. The affinity of conservatives waned as the Revolution grew more radical, and diminished altogether when England found itself in a life and death struggle with France. While the United States was officially neutral, Monroe suspected that Hamilton and others around President Washington were bent not only on saving Great Britain, but eviscerating the French Revolution in order to stop the spread of revolution throughout Europe. Miraculously, it seemed, George Washington in the spring of 1795 named Monroe to be the minister to France. Jefferson hurriedly wrote Monroe that the president had chosen him only to remove him from the Senate; what is more, warned Jefferson, Washington would “seize the first pretext” to recall him, an act that could easily ruin Monroe’s political career. Jefferson’s cautionary note arrived after Monroe had sailed.

Monroe was a blazing adherent of the French Revolution, which he believed embodied the radical Enlightenment and the views of Jefferson and Paine. He hoped the French example would result in the toppling of monarchies and titled nobilities in England and Europe, and he additionally thought that successful reforms in France would inspire further radical change within America. Though he was the representative of an administration that – to say the least – was cool toward the Revolution, Monroe’s radicalism shined through. His speeches emphasized the indissoluble bond between France and the United States, two nations that shared many common interests, including joint commitments to the “equal and unalienable rights of man.” It was as if Monroe saw himself as a shield between French radicals and the Washington presidency that appeared to be inching inexorably toward closer ties with Great Britain and a break with France, its only ally. In the end, just as Jefferson had predicted, Washington in mid-1796 recalled Monroe.

Monroe had refused to buckle. He believed in the American and French Revolutions, and his distaste for all that England represented had not flagged. He recollected, too, that without the help of France, the United States could not have won the War of Independence, and he wished to stand by the friend that had stood by America in its great struggle.