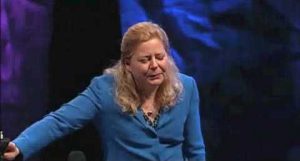 Yesterday, just hours before Ohio Gov. John Kasich vetoed legislation that would have outlawed abortion from the moment a fetal heartbeat can be detected, which can be as early as six weeks and possibly before a woman even knows that she is pregnant, the author of that legislation, Religious Right activist Janet Porter, appeared on Bryan Fischer’s radio program to brag that her “heartbeat bill” was crafted “to be the arrow in the heart of Roe v. Wade.”

“Our goal is to protect nearly every child, then go back and get the rest,” Porter said. “This is an incremental bill … We drafted this bill, we literally crafted this legislation to be the arrow in the heart of Roe v. Wade. It is made to come before the United States Supreme Court.”

With President-elect Trump positioned to possibly drastically reshape the makeup of the court, Porter predicted that “we are going to be looking, I believe, at a brand new Supreme Court by the time the Ohio heartbeat law reaches the Supreme Court [and] I believe the Trump court will welcome it with open arms.”

Porter said that the passage of her bill by the Ohio legislature was the result of “divine intervention by an almighty God” and noted again claimed that Republican Rep. Steve King of Iowa promised to introduce a federal version of her “heartbeat bill” in the next session of Congress.

“I don’t want to talk about regulating it, I don’t want to march about whether we fund it or not, I want to end it,” she said. “We want to raise the bar from regulating abortion to ending it in nearly every case and that’s what this bill will do.”