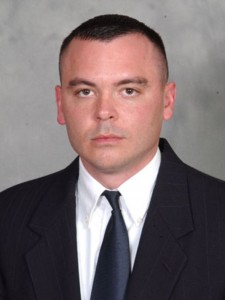 Indiana State Police on Thursday fired a trooper who was sued twice in the past two years for proselytizing citizens on the job.

Senior Trooper Brian Hamilton was a 14-year veteran of the agency. In a news release Thursday, the department said he was terminated after a two-month internal investigation into a complaint that he questioned a citizen’s religious affiliation in January.

“While all of us — citizen and police officer — enjoy the right to freedom of religion and freedom of speech, there are appropriate and proper restrictions placed on agents of the State related to their actions while engaged in their official duties,” State Police Superintendent Doug Carter said in a statement. “While I respect Mr. Hamilton’s religious views I am also charged to respect every citizen’s rights, and the best way forward for the citizens of Indiana, and for Mr. Hamilton, was to end his employment as a State Police officer.”