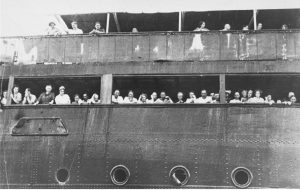 Jewish refugees fleeing the Nazi’s aboard the MS St. Louis, which was turned back at the U.S. border, condeming all its passengers to death. / Public Domain

Jewish Immigration to the United States

All U.S. history textbooks cover the great wave of immigration that brought approximately 25 million people to America from 1880—1924. These immigrants came from many places and for many reasons, and most narratives provide adequate coverage of the push and pull factors behind decisions to emigrate, the difficult journey, and the struggle to adapt to a new country. Textbooks provide a fairly standard account of chain migration, the creation of ethnic urban neighborhoods, the Americanization movement, and the ultimately successful nativist campaigns for restrictive immigration legislation.

A closer examination of one group during this period allows for a deeper look at the causes and consequences of immigration. Eastern European Jews are often mentioned in textbook accounts as examples of the new religious groups entering the U.S., as frequent participants in the labor activism that characterized industrial development, and as significant contributors to popular American culture, especially through music and movies.

Several other significant elements of the Jewish immigrant experience, however, receive little attention. A closer look sheds light on the complicated nature of turn-of-the-century immigration to America.

When the nearly 2.5 million Eastern European Jews (along with significant numbers of central and western European Jews and some Sephardic Jews from the Ottoman Empire) arrived in the U.S., they joined a population of some 250,000 Jews already living in America. Some of these families lived in America for decades and even generations. Although the primarily Yiddish culture, greater propensity toward radical politics, and somewhat more traditional religious orientation of many of the new arrivals would transform the character of American Jewry, interaction between the groups did so as well.

In both a genuine, massive effort to help their fellow Jews and an attempt to ward off increased anti-Semitism, the established Jewish community created an unprecedented network of benevolent societies, settlement houses, educational facilities, and charitable organizations to aid the new Jewish immigrants. The resulting network of communal agencies became models of the new field of social work for all Americans during the Progressive Era and beyond. Jewish women played a key role in these endeavors through such organizations as the National Council of Jewish Women and synagogue sisterhoods (see Primary Source National Council of Jewish Women [1926]).

There was considerable tension between those who demanded instantaneous Americanization of everything from ritual practice to foodways and those who insisted on a more gradual acculturation, but a shared wellspring of religious and cultural traditions helped keep even the most contentious elements of the American Jewish community intertwined in some ways.

One example is the 1910 Protocol of Peace that ended a nationally significant strike within the heavily Jewish garment industry in New York (see Primary Source The Protocol of Peace [1910]). This agreement was negotiated and signed by Jewish communal leaders and lawyers who represented both Jewish garment manufacturers and factory owners and Jewish workers and labor activists.

American Jewish history thus provides a test case for the question of how different the experiences of the “old” and “new” immigrants actually were, with a growing number of historians convinced that the period between 1820 and 1924 should be seen as a continuous century of American Jewish migration with more structural similarities than discontinuities.

Ports of Entry and Sites of Settlement

Textbook accounts of turn-of-the-century immigration virtually all call attention to the two major points of entry into the U.S.: Ellis Island (after 1892) for European immigrants, and Angel Island (after 1910) for Asian immigrants. However, this narrative leaves out the hundreds of thousands of Mexican and Canadian immigrants who crossed land borders. In the Jewish case, it also omits the Galveston Plan and consequently fails to deal with the Jewish immigrants who did not cluster in large urban, industrial centers like New York, Philadelphia, and Chicago (see Primary Source Mendelson Letter [1909]).

Concerned about overcrowding and the possible negative attention drawn by densely populated Jewish communities, a number of American Jewish leaders worked to encourage Jewish immigrants to enter the U.S. at the port of Galveston, TX. From that point the immigrants fanned out all over the interior of the United States with the support of the international Jewish Territorial Organization.

Although the Galveston Plan did not attract huge numbers during its operation from 1907–1914, it is important to recognize that Jewish immigrants settled all over the U.S., trying their hand at everything from small businesses in the South to agricultural colonies in the Upper Midwest. As was the case with numerous other immigrant groups, the Jewish immigrant experience was considerably more diverse than is usually recognized, encompassing life in small-town America as well as on the Lower East Side of New York City.

Wherever Jews lived in America, they faced anti-Semitism. That had been the case since before the American Revolution, but the huge increase in the Jewish population during the period of mass migration contributed to the marked growth of anti-Semitism. This is an important subject to address because it complicates the idea of the U.S. as a bastion of religious tolerance that welcomed anyone fleeing religious persecution.

Some textbook narratives point out that Jews, along with Catholics and African Americans, were the targets of the Ku Klux Klan revival that began during World War I, and several mention the 1913 establishment of the Anti-Defamation League to fight anti-Semitism. Few textbooks, if any, however, mention the 1915 lynching of Leo Frank, an event that shook American Jewry to its core (see Primary Source Lynching of Leo Frank [1915] *WARNING: Graphic Content*). Only rarely do they mention the virulent, unapologetic anti-Semitism of automobile magnate Henry Ford at a time when he was the most admired man in America.

Widespread American anti-Semitism led to quota systems at many American universities and contributed to the restrictive immigration legislation of the 1920s. These restrictions kept out innumerable European Jewish refugees who might otherwise have been saved from the horrors of the Holocaust.

Given the numerous immigrant groups involved, it is understandable that textbooks cannot devote too much time to any particular community. The tantalizing references to Jewish immigration to the U.S. offered in standard accounts should serve as an invitation to probe more deeply into the rich, textured history of all the immigrant groups that altered the course of American history.