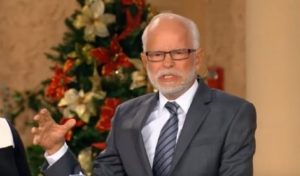 Yesterday, televangelist Jim Bakker said that Donald Trump is much like Saint Peter, explaining that while Peter was often “foolish” and “cursing and swearing,” he “didn’t hesitate” to follow Jesus, and neither will Trump.

His comparison was heartily endorsed by his guest Lance Wallnau, a pro-Trump pastor.

“Jesus chose a businessman to give him governmental keys to restore the kingdom,” Wallnau said. “Jesus is putting his hand on a Peter right now; like you’re just saying, it’s a businessman. Trump is a businessman with the keys of the kingdom right now to wreck what hell has been doing over the United States.”

Pleading with viewers to support the GOP presidential nominee, Bakker said that “America’s got one last chance” and “there is a shaking coming.”

“God wants to give us someone who has enough sense to manage this country in chaos,” he said.