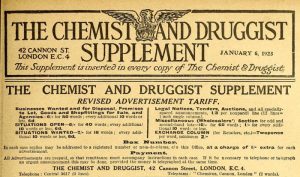 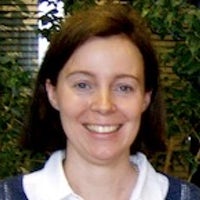 In the early 20th century, the Chemist and Druggist included a weekly supplement. Alongside “Businesses Wanted” and “Premises to Let”, the C+D also published “Situations Open” and “Situations Wanted” with opportunities advertised and sought in both retail and wholesale pharmacy businesses. The listings make fascinating reading: dipping into just a few editions of the Chemist and Druggist in the 1920s reveals intriguing insights into pharmacy employment of the time, an era before equal opportunities legislation. And with the brief word count allowed, there is something of Twitter meets LinkedIn to the nature of the entries when viewed with a modern eye.

What were the skills required? The listings provide both sides of the story with “Situations Open” suggesting what an employer valued and “Situations Wanted” highlighting what potential employees thought were their selling points. Many areas are unsurprising: window dressing – “must have had brisk Counter experience and possess the necessary ability to dress attractive windows” – and the need to be a “quick accurate Dispenser.”

For rural pharmacies, knowledge of veterinary medicines was also requested. One advert in January 1923 went into detail: “Wanted, early February, young unqualified Assistant; duties, shop routine, and in addition will be required to call on farmers and attend markets to sell my dips, agricultural chemicals, veterinary medicines.” 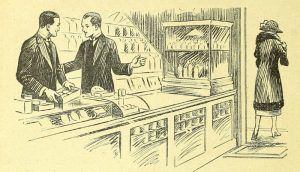 Other requirements reflect the technological side of some pharmacy businesses. Pharmacists had been quick to embrace photography from the later 19th century with their chemistry experience proving particularly useful. A “Situations Wanted” listing on 7 January 1928 emphasised “used to modern Window-dressing, Kodak Photography.”

The common pairing of pharmacy and optician businesses was also reflected with adverts wanting opticians and also optical experience from pharmacy staff. On 6 January 1923, an experienced optician looking for a situation even stated he would supply his “own sight-testing appliances.”

By 28 November 1925, a few candidates were stressing their experience of “wireless” sales. The BBC only started its daily radio broadcasts in October 1922, so these pharmacists were clearly quite cutting-edge. But it seems that comprehensive experience was the common thread: “Wanted, qualified man to take charge; making own Proprietaries: must be well up with Window-dressing, Photographic, and good all round.” 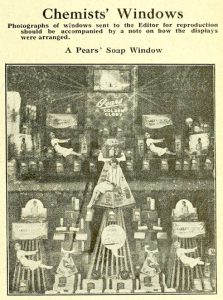 The Sex Discrimination Act was still 50 years away, and the majority of listings request details of gender and marital status that would be frowned upon today. This seems to have been the norm whether “Qualified Assistant [wanted], young, preferably married, to live over shop” or “Assistant, unqualified, male, age 22, single, required.” Those offering their services routinely include these details such as “Assistant or Dispenser; single; active; mid-aged; good references; unqualified” or even “M.P.S., 26, marrying shortly.”

It’s not consistently clear whether being married was assumed to mean a more reliable employee or whether a single pharmacist would be prepared to work more unsociable hours. There was an implicit assumption that employees would be male with adjectives used such as “gentlemanly” and positions described such as “counterman”. But in a decade when the number of women pharmacists was growing steadily, some listings specified a female employee such as this one for a business on Vauxhall Bridge Road: “Experienced live-wire female Assistant for very fast Counter trade; no novices.”  In contrast, an advert for a “qualified lady” in Cheltenham appears less demanding:

Physical attributes were also requested and supplied, particularly height. Presumably the taller an employee, the more useful they would be in a business with floor to ceiling shelving. Some of the “Situation Wanted” listings go as far as providing statistics. Did the potential employee in January 1923 think that his 5 ft 9 ½ in. would make the difference? Perhaps more intriguing in the same edition is the advert from the high-class Wigmore Street pharmacy John Bell and Croyden Ltd which required “immediately an Assistant as Second Copyist, Dispensing and Telephone Attendant; preference given to a disabled man.” Was this the company’s way of providing an opportunity for an injured ex-serviceman?

The descriptions used to indicate qualifications reflect the complex hierarchy of educational possibilities in the early 20th century. “Qualified” pharmacists might have had the Pharmaceutical Society’s Minor or Major examinations, or the “Hall certificate”, the dispensing qualification offered by the Worshipful Society of Apothecaries. In most listings in this period, the exact qualification was not specified. Of course a request for an “Unqualified Assistant” or a “Junior or Improver” also reflected a salary expectation. Just what classified an “improver” is not entirely clear! You would hope that those showing ambition would be looked on favourably such as “Apprentice, 15 months’ experience, desires post to complete training.” Occasionally languages are detailed, whether a knowledge of French required for a West End pharmacy, or the ability to speak English and Welsh from a pharmacy employee in North Wales.

It’s worth noting that the majority of those looking for situations as dispensers were women. In the 1920s, working as a dispenser, typically with the “Hall certificate” in a hospital or for a doctor was an attractive role for a woman who was likely to meet discrimination working behind the counter in a high street pharmacy. 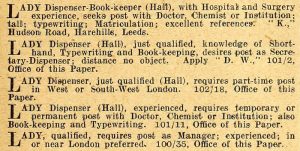 The terminology describing posts stems from the apprenticeship system which was still the entry route for pharmacy. In addition to sending a photo, details of age, experience and height, most adverts couch their need to know a starting date in phrases such as “state when at liberty.” Many jobs are described as “outdoors” meaning that the post-holder was not expected to live in and that the employer would reflect this in the salary. In November 1925, there is a listing for a “Vacancy for well-educated youth anxious to enter Retail Drug Trade as out-of-door Apprentice.”

The alternative was that a room or “berth” was provided as part salary. The exact pay details seem to be very rarely provided. Instead applicants are mainly requested to include their salary expectations in their correspondence. Equally, there is not enough space provided to detail working hours, with just the occasional glimpse of the normal expectations via exceptions given such as “no Sunday or holiday duty.”

What has not changed much over the last 90 years is the key selling points provided by potential employees. While “abstainer” or “Accustomed to a working-class trade” might not be valued by a 21st century pharmacist, “progressive ideas”, “desires change” or “not afraid of work” are still sentiments that grace many an application form today.