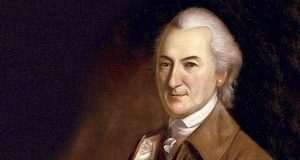 John Dickinson (1732-1808) was one of the most important of America’s founders. He was a colonial legislator, member of the Stamp Act, Continental, and Confederation Congresses, chief executive of both Delaware (by a 25 to 1 vote; his being the only opposed) and Pennsylvania, president of the 1786 Annapolis convention that led to the Constitutional Convention, and among the most informed and seasoned statesmen to attend the Constitutional Convention. Historian Forrest McDonald has written that, but for Dickinson and a few others, “the resulting constitution would not have been ratified.” William Pierce wrote that he “will ever be considered one of the most important characters in the United States.”

Despite his other roles, Dickinson was best known as the “Penman of the Revolution,” for his writings in support of the colonies’ cause. He composed The Late Regulations Respecting the British Colonies…Considered, in the debates over the Stamp Act in 1765. He produced a 1771 petition to the King of England. Along with Thomas Jefferson, he penned Declaration of the Causes and Necessity of Taking Up Arms in 1775. He was co-author of the Articles of Confederation. He defended ratification of the Constitution in the widely published Fabius Letters in 1788, which some have considered almost as influential as the Federalist Papers.

Of all his writing, however, perhaps most important were his Letters from a Farmer in Pennsylvania to the Inhabitants of the British Colonies. After being published as letters, beginning on December 21, 1767, they were then published as a pamphlet, reprinted in most colonial newspapers and read widely, making Dickinson our country’s first homegrown hero, whose fame was only exceeded by Benjamin Franklin. As we pass the 250th anniversary of their beginning, it is worth recalling John Dickinson’s words that were so influential in inaugurating America’s experiment with liberty.

When John Dickinson died, President Jefferson expressed his sorrow and both houses of Congress wore black armbands in mourning. Why? Because Dickinson recognized that the essential purpose of government was to maintain liberty against others’ predatory acts, or in his words, to protect “the worthy against the licentious.” Further, he knew that without liberty, “the loss of happiness then follows as a matter of course,” and he helped motivate our founders to be “protectors of unborn ages, whose fate depends upon your virtue.” And in substantial part due to his influence, the United States was created as the first government ever based on liberty.

For the 250th anniversary of his most famous work, with liberty under assault in many areas, we can again benefit from John Dickinson’s words defending it. He motivated our forefathers to rouse themselves to prevent the possibility that “the tragedy of American liberty is finished.” We need to recognize and respond to the same threat today. As Dickinson co-wrote with Thomas Jefferson in Declaration of the Causes and Necessity of Taking Up Arms, “We…find nothing so dreadful as voluntary slavery. Honor, justice, and humanity, forbid us tamely to surrender that freedom which we received from our gallant ancestors, and which our innocent posterity have a right to receive from us,” so that we must “regard these oppressive measures as freemen ought.”